One of the highlights was the company's long-rumored digital services package.

In a keynote event on Tuesday, Apple (AAPL 0.20%) debuted a host of new and refreshed products, providing a little something for almost everyone.

The company extended the lineup of its popular Apple Watch, boosting the capabilities of its top-of-the-line device while also adding a lower-cost model. Apple also introduced product refreshes with the eighth generation iPad and iPad Air, and new services options. 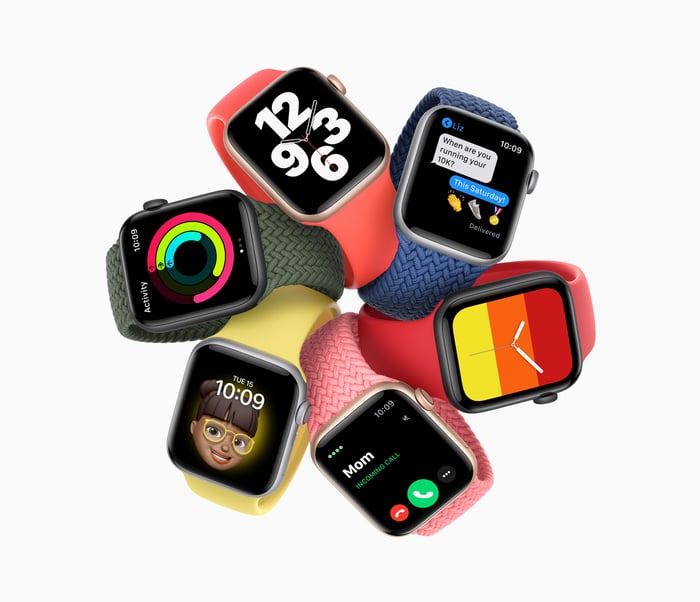 The Apple Watch Series 6 features a new health sensor that can measure blood oxygen, an important indicator of overall health, in just 15 seconds. The device also offers a speedier new processor and a lineup of new case finishes and bands. In a somewhat surprising move, Apple also introduced a lower-cost model, the Apple Watch SE, with a starting price of $279, versus the $399 starting price for the Series 6.

The company also launched a new service, Apple Fitness+, built exclusively around the Apple Watch. The subscription service features a catalog of videos across a wide variety of workout types that sync directly to features on the Watch and will cost $9.99 per month, including use by family members.

Apple's entry-level eighth generation iPad adds a beefier A12 bionic processor bringing the neural engine to the iPad for the first time. Apple said the device has a 40% faster CPU, and a 30% improvement in graphics. The device starts at $329, and costs $299 for education customers.

The company also debuted a new iPad Air, a significant redesign from the current version. The device features the new A14 bionic chip with a faster neural engine, with expanded machine-learning accelerators and advanced features, starting at $599.