Please ensure Javascript is enabled for purposes of website accessibility
Log In Help Join The Motley Fool
Free Article Join Over 1 Million Premium Members And Get More In-Depth Stock Guidance and Research
By Nicholas Rossolillo, Anders Bylund, and Billy Duberstein – Sep 20, 2020 at 9:00AM

Investing in semiconductor stocks can be challenging. As with all things rooted in manufacturing, the fortunes of chipmakers are highly sensitive to supply and demand. After a rough go in 2018 exacerbated by the U.S.-China trade war, the industry started to rally in 2019 -- culminating in a boom this year as many organizations around the globe have scrambled to make tech hardware upgrades during the pandemic. The PHLX Semiconductor Sector index is up 18% year to date as a result.

After an incredible run, a pullback in these cyclical businesses isn't out of the question. And if there's a market crash, there will also be an opportunity to buy Micron Technology (MU 0.01%), Cirrus Logic (CRUS -1.89%), and Taiwan Semiconductor (TSM -0.17%).

A basic staple in early stages of rebound

Nicholas Rossolillo (Micron Technology): The manufacture of memory chips ranks as one of the more wild segments of an already cyclical semiconductor industry. Micron has been no exception, with its sales and profits (and thus its share price) highly susceptible to global memory chip demand and supply provided by it and the handful of its peers. 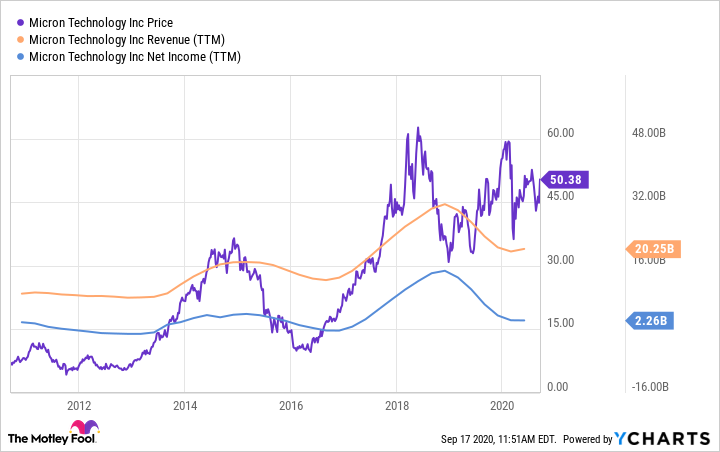 2018 and 2019 were tough years as oversupply cratered the price on memory chips and a ban placed on sales to Chinese tech and telecom giant Huawei by the White House made things that much harder. However, Micron's cyclical troughs have improved over the years, and during this last downturn the company remained profitable throughout (something that has eluded it in the past). And it's turning a corner this year thanks to memory chip demand for data centers and other high-end computing needs. However, a rally in Micron's stock price has stalled as of late -- on worry that demand from data center customers will ebb during the second half of 2020 and a new ban on Huawei sales that went into effect on Sept. 14.

Recoveries can be messy, though, especially in the early innings. But eventually, I expect a pickup in memory chip purchasing -- and with it better pricing and higher profits. Besides the short-term bump Micron has received this year from business needs, long-term trends like 5G mobile networks and phones, tech embedded in autos, and AI (read: automation) favor increasingly greater need for memory. The peaks and valleys aren't going away for this chipmaker, but I expect them to trend higher over time.

At just over 25 times trailing-12-month earnings, Micron doesn't look particularly cheap -- although that metric is elevated because it covers much of the company's downturn in the last year while profits were low. But by other metrics, like the price-to-book ratio, this stock looks like a longer-term value. Some turbulence in the stock market likely lies ahead, so if there's a pullback, keep Micron on your watch list.

The sweet sound of bargain-bin discounts

Anders Bylund (Cirrus Logic): Cirrus Logic is already a cheap stock. The audio and power controller chip specialist would be a no-brainer buy if the broader market takes another sudden dive.

Cirrus' fortunes are closely related to Apple (AAPL -0.66%). The company has been providing audio solutions for iPhones, iPads, iPods, and Macs for more than a decade. Cupertino accounted for 79% of Cirrus' total sales in fiscal year 2020 and 83% in the first quarter of 2021. When iPhone sales are slow, Cirrus suffers and its share prices plunge.

The next game-changing downturn will almost certainly include pressure on high-end smartphone sales, which then would trigger a generous discount on Cirrus Logic's stock. In addition, Apple is expected to drop a Cirrus chip from the next iPhone generation in a long-running quest to simplify the phone's audio systems and get rid of the last vestiges of physical headphone jacks. Cirrus Logic shares already look cheap today, trading 25% below their full-year highs at just 16 times forward earnings.

I'm downright tempted to buy Cirrus Logic at the current prices, and that urge will only grow more intense if the stock drops again. You see, Apple has no intention of dropping Cirrus Logic as a component supplier and the company is actually poised to replace the missing analog audio product with a brand new power controller for an as yet unknown new feature in next year's iPhone updates.

Furthermore, Cirrus Logic has $290 million of cash on hand and no long-term debt to speak of. The company is profitable and generated cash even in seasonally slow periods, and will surely make it out of the coronavirus pandemic alive. Cirrus Logic's stock is already cheap and poised to rebound strongly over the next year or two. Another discount on top of all that would be a crystal-clear buying signal in my eyes.

The world appears to be headed toward "fabless" model, whereby the biggest chipmakers take care of their design, then outsource production -- which is growing ever more complex -- to a manufacturer. It's a much more capital-efficient way for companies to produce chips, rather than having to invest lots of money in their own fabs.

Advanced chip manufacturing is hard, but TSM's years of experience making a wide variety of semiconductors has given it a knowledge and process lead that other manufacturers are struggling to match. In fact, rival GlobalFoundries threw in the towel on competing with Taiwan Semi on the leading edge back in 2018. Intel itself even hinted that it may outsource some manufacturing going forward, likely to TSM. The U.S. government also recently subsidized TSM to build a new fabrication plant in Arizona on national security grounds.

It seems TSM has built itself a formidable moat in chip manufacturing, and I'd love to own more shares. However, after its recent run of good fortune, TSM's stock has surged to a valuation of 37 times earnings and its dividend yield has fallen under 2%.

If the market crashes, it tends to take good and bad companies down along with it. With a widening competitive advantage, nice payout, and solid balance sheet, I'd sure love the opportunity to buy Taiwan Semi at a cheaper price.