If the likes of Facebook and Elon Musk are delving deeper into futuristic technology, should investors be excited to see WiMi Hologram Cloud stock mentioned in the same breath?

Shares of Chinese technology company WiMi Hologram Cloud (WIMI -0.65%) soared on Monday after an article by MobiusTrend Group highlighted the potential of technology interfaces between computers and the human brain. The stock finished up 34% for the day, although it had been as much as 55% higher earlier in the session.

WiMi stock is roaring back to life after being left for dead. Earlier in the year, it was a multi-bagger trade because of the buzz surrounding hologram technology. But excitement eventually waned, and shares gave back most of the earlier gains -- until today. 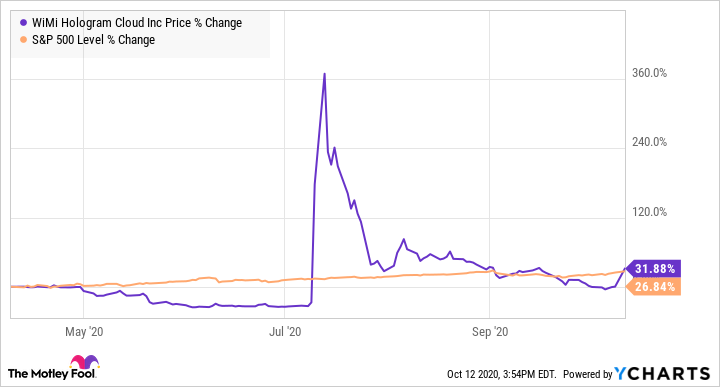 The article by MobiusTrend Group was focused on the development of brain-to-computer interface technologies. For an example, it mentioned CTRL-Labs, a company acquired by Facebook in 2019 whose wristband hardware can reportedly send brain signals to a computer. The article also mentioned a company called Neuralink, a start-up founded by Tesla CEO Elon Musk. Neuralink recently made headlines by offering a demonstration of a device inserted into the brains of pigs, displaying their brain signals on a screen in real time.

Facebook has a nearly $800 billion market capitalization, while Tesla has over a $400 billion market cap. It makes sense these tech empires and their founders would be chasing futuristic opportunities like this. But by mentioning a small-cap company like WiMi Hologram Cloud in the same article, it was enough to send the stock skyrocketing.

Here's the thing: It's hard to understand how WiMi even connects to this. The article didn't say anything about how holograms could be used in brain-interface technologies, and there's not even a remote business arrangement between Tesla, Facebook, and WiMi Hologram Cloud. In short, nothing changed with WiMi today in the least; its prospects didn't suddenly improve.

As I've warned before, it's imperative for investors to understand exactly how WiMi generates revenue. According to its 2019 annual report, it generates revenue by creating advertising campaigns and running middleware payment software in mobile apps. Its revenue does not come from selling hologram hardware or anything similar.

When WiMi first caught investors' eyes earlier this year, there was reason to question if the press release was from an objective source. It's fair to question that again. Investors should look for verifiable third-party validation of WiMi's opportunity in brain-interface technology. Investors should also wait to get a quarterly update from management. The only problem is management hasn't filed anything with the Securities and Exchange Commission (SEC) since the American depository shares (ADS) began trading in the U.S. back in June.

There's enough red flags here for investors to not chase WiMi Hologram Cloud stock today. Look toward the many less risky opportunities out there.