Shares of U.S. Xpress Enterprises (USX -0.61%) had fallen 21% as of 12:11 p.m. EDT on Friday after the trucking company delivered quarterly results that came in below expectations. The size of the drop seems disproportionate to the quality of the quarter, but U.S. Xpress shares were flying high coming into earnings season, and the markets weren't prepared for a miss.

After markets closed Thursday, the trucking company reported third-quarter earnings of $0.20 per share on revenue of $431.5 million, short of Wall Street's consensus of $0.21 per share in earnings on sales of $445 million. The earnings miss was negligible, especially considering the consensus number was pushed higher in the last few weeks as analysts adjusted expectations. But the revenue shortfall was a disappointment. 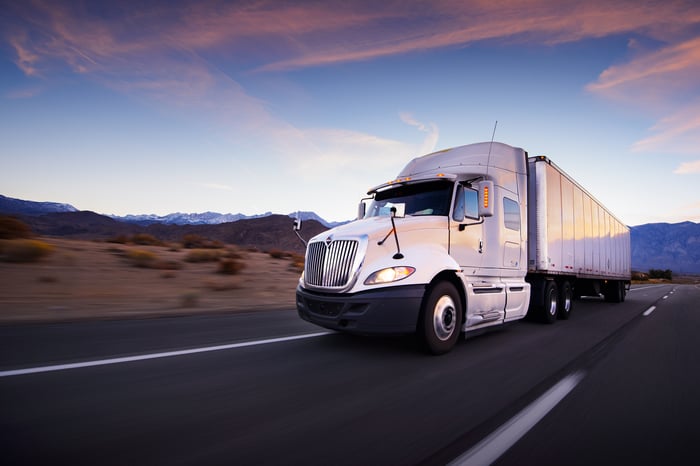 Revenue was actually up slightly year over year, but U.S. Xpress was dinged by issues in recruiting drivers and the suspension of its student driver program. In a statement, CEO Eric Fuller said the company is making progress on recruiting, and has been encouraged by what it sees on pricing heading into 2021.

"Adjustments we have made over the past two months to our digital fleet recruiting program are beginning to deliver increased hiring momentum through October," Fuller said. "Contract rates are renewing at higher levels, brokerage margins expanded as we exited the quarter, and our consolidated safety record is the best in the company's modern history."

All in, there have been a lot worse quarters than what U.S. Xpress posted. And given Fuller's positive outlook, it doesn't seem time to panic. Shares were enjoying a strong run heading into earnings season, up more than 240% from March lows, and even after Friday's decline are up 45% for the year.

U.S. Xpress shares currently are trading at a reasonable 7.8 times expected 2021 earnings. The sell-off looks to me like an overreaction. This trucker can get back into the fast lane quickly.

Why Shares of U.S. Xpress Are Up (Again) Today