The automaker expects it to be a big seller around the world.

It's official: Ford Motor Company (F -2.03%) said that it will unveil its next battery-electric vehicle -- a delivery van -- in November.

Following remarks by CEO Jim Farley during Wednesday's third-quarter earnings call, Ford confirmed on Thursday that it will present its new E-Transit, a battery-electric commercial van, in an online event on Nov. 12. 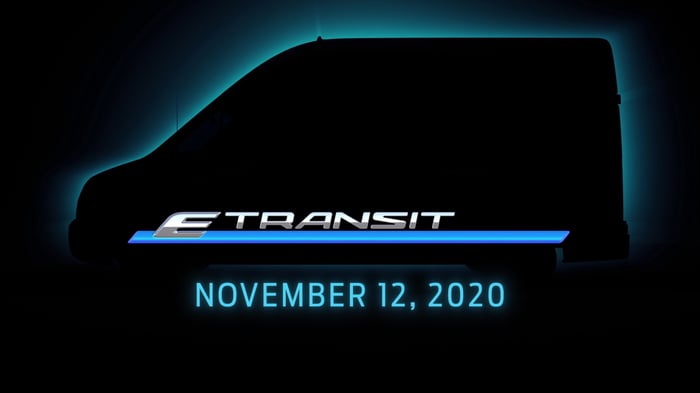 Farley said during the earnings call that the new E-Transit, like the upcoming battery-electric F-150 pickup truck, will have an "accessible" price point, with capabilities and operating costs that should be "very compelling" to some of Ford's commercial-fleet customers -- and very good for Ford's bottom line.

"These electric vehicles will be true work vehicles, extremely capable and with unique digital services and over-the-air capabilities to improve the productivity and uptime of our important commercial customers," Farley said. "We believe the addressable market for a fully electric commercial van and pickup, the two largest addressable profit pools in commercial, are going to be massive."

Farley said that the E-Transit will be available in all of Ford's global markets. The company has long held significant shares of the commercial-vehicle markets in the U.S. and Europe, and more recently became a rising presence in China. Commercial vehicles are a key component of the $11 billion plan to restructure and improve profitability that Ford revealed in 2018.

Ford has said that it expects to begin shipping the electric F-150 by mid-2022. The company said that it will share more details about the E-Transit's launch timing when it is revealed next month.