If you're a risk-seeker on the hunt for double-digit growth, look elsewhere. If you're in the market for a reliable investment regardless of what happens over the course of the coming few months, put Walmart (NYSE:WMT) on your shopping list. And buy plenty of shares. This brick-and-mortar retailer has turned itself into an all-weather player ready for anything.

That couldn't be said just a few years ago. Plagued by poorly stocked store shelves, disinterested employees, and an e-commerce platform that was getting trounced by Amazon, Walmart offered no measurable upside. Since taking the helm in 2014, though, CEO Doug McMillon has made the retailer a force to be reckoned with. And the best could be yet to come. 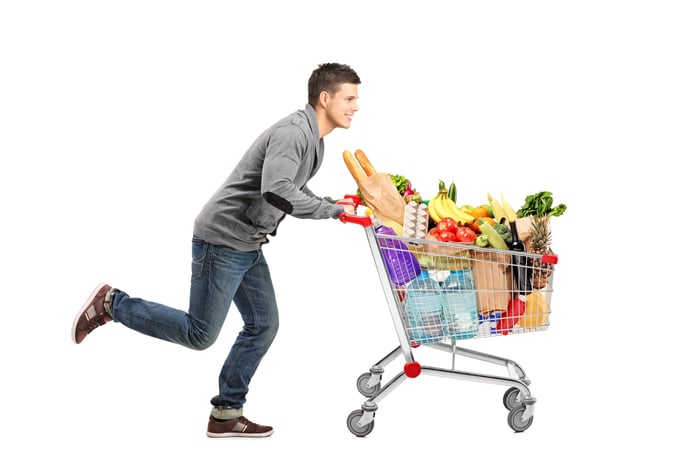 Making it the easy choice to shop

You know the company. Odds are good you even shop at one or more of its 11,484 worldwide stores, more than 4,700 of which are found in the United States (not counting its Sam's Club warehouses). It's not only the nation's biggest seller of groceries, it's the go-to place for millions of consumers to purchase school supplies, electronics, home goods, hardware, and more.

That revenue mix is what makes Walmart such a consistent company. 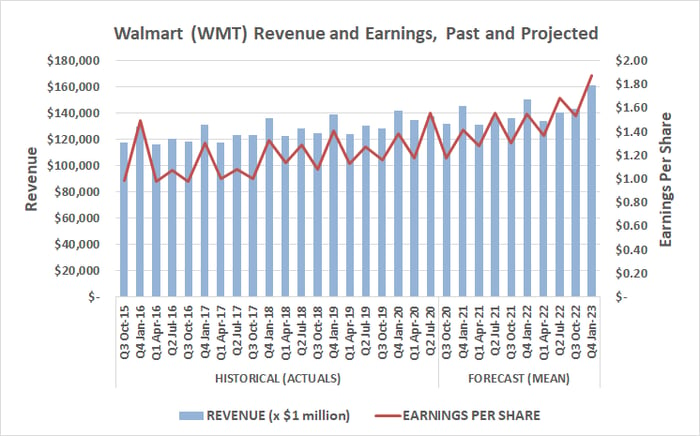 Rapid expansion of its curbside pickup program in response to the coronavirus pandemic will only bolster this consistency.

The company didn't offer specifics about the service, but its 97% year-over-year growth in e-commerce sales during the quarter ending in July was certainly aided by consumers' rush for the contactless shopping option. And although it didn't say how much of it can be specifically attributed to the retailer, research firm Ipsos touted Walmart as consumers' favorite buy-online/pickup-in-store venue in the wake of the 78% nationwide increase in curbside pickup since the coronavirus took hold. Notably, Ipsos' data suggests 69% of curbside-pickup shoppers will continue to use the option even once the pandemic passes.

Some customers don't even have to drive to the store to retrieve their orders anymore, either. The retailer's subscription-based service Walmart+ was launched in mid-September, offering free unlimited store-to-home deliveries for members at a modest price of $12.95 per month. Of the company's 4,700 U.S. stores, 2,700 offer same-day delivery to Walmart+ subscribers. Early interest has been impressive, too. A Piplsay survey suggested 11% of the country's 330 million residents had signed up for Walmart+ within two weeks of its mid-September launch.

Both programs attract consumers who may not have otherwise chosen it as their shopping destination. Soaring numbers of new COVID-19 cases in the United States headed into the cooler holiday season make these offerings even more marketable.

It's a lifestyle thing

Case in point: offering health insurance. In early October, the company unveiled Walmart Insurance Services, wading into the Medicare market just in time for this year's open enrollment. The program dovetails into its burgeoning healthcare presence. Launched a little over a year ago with one stand-alone clinic, it now has six such locations up and running. Over a dozen more should be open before the end of next year, giving consumers access to services ranging from primary care to optometry to X-rays to dental services, and more.

The company is beefing up its in-store offerings, too. A handful of stores now offer technology installation and support, akin to Best Buy's Geek Squad. If the pilot program proves itself, presumably more stores will add it. Last month, the company unveiled a new store design that's loaded with digital tech. New signage encourages the use of Walmart's app, allowing it to highlight certain products as consumers navigate the store, collecting valuable data in the process.

The company continues to grow its online reach as well. In June, Walmart inked a deal with Shopify that's expected to add about 1,200 unique Shopify stores to the Walmart.com platform by the end of the year.

It's difficult to assign a specific upside stemming from these evolutions. It's just as difficult, however, to believe these developments won't drive revenue and profit growth by drawing a bigger crowd to Walmart's ecosystem. A data-rich list of customers is very "new economy."

Perhaps most important right now is the potential impact of another wave of pandemic-related shutdowns. New cases in the U.S. jumped to record highs in October, reprising the potential for the shelf-emptying demand for staples seen in the early days of the contagion. New numbers from Inmar Intelligence say 57% of consumers are considering stockpiling items like toilet paper and hand sanitizer as winter nears. With Walmart more ready for it now than it was then, this buying wave could mean an even merrier quarter.

It may not offer tons of reward, but Walmart imposes a lot less risk than most other names right now.