Please ensure Javascript is enabled for purposes of website accessibility
Log In Help Join The Motley Fool
Free Article Join Over 1 Million Premium Members And Get More In-Depth Stock Guidance and Research
By James Brumley – Oct 7, 2020 at 6:00AM

The initial interest from the country's most frequent online shoppers already paints a telling picture.

The new subscription-based service from Walmart (WMT -0.65%) called Walmart+ isn't exactly an existential threat to Amazon (AMZN -2.72%). It would be short-sighted of Amazon, however, to believe Walmart+ won't chip away at its market share.

In fact, it probably already has. A recent survey taken by market research firm Piplsay suggests around 11% of the roughly 330 million people living in the United States had signed up for Walmart+ within the first two weeks of its mid-September launch. That's on the order of 36 million members, versus Consumer Intelligence Research Partners' recent estimate of 112 million U.S. subscribers to Amazon's similar Prime service. Piplsay's numbers further indicate that, of the consumers already signed up for Walmart+, 45% also subscribe to Prime, while another 36% say Walmart+ is their first subscription of the kind. Yet another 19% of recently enrolled Walmart+ users say they canceled Prime to step into the brick-and-mortar retailer's delivery footprint.

It's that last data nugget that should bug Amazon and its shareholders the most. 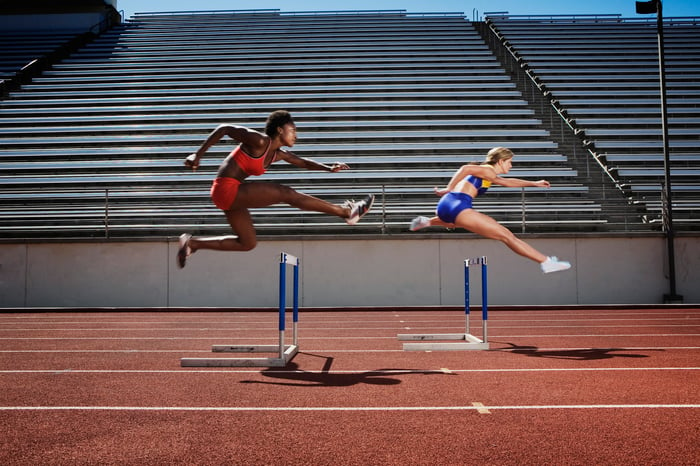 What is Walmart+, you ask?

On the off chance you're reading this and don't know, Walmart+ is Walmart's new subscription-based service that makes it more convenient to shop at Walmart.com. For $12.95 per month or $98 per year, members can enjoy unlimited free deliveries of goods bought online, including groceries (as long as each order amounts to at least $35). In some markets, same-day deliveries are possible.

If it sounds familiar, there's a reason. At a price of $12.99 per month or $119 per year, Amazon Prime also offers free and fast delivery on a slew of goods sold at Amazon.com (but no minimum purchase amount), as well as access to a respectable library of on-demand video, ebooks, and digital music. Walmart+ doesn't offer any such entertainment services (at least not yet), but it does offer discounts on fuel purchases and in-store perks.

It's difficult to say Walmart+ wasn't created in response to the increasing reach of Prime and the extra revenue the program is able to extract from subscribers. Walmart's take on subscriptions, however, may hold a few advantages over Amazon's Prime.

Walmart's edge is its retail infrastructure

Amazon's nationwide network of fulfillment centers and distribution centers is impressive, facilitating next-day delivery of a huge array of goods. With 4,753 Walmart stores peppered across the United States, though, the brick-and-mortar retailer's physical presence allows it to do things Amazon simply can't do. Chief among those things is the delivery of perishables, and in some locales, same-day deliveries.

This speed and selection is no insignificant factor if Amazon's recent initiatives are any indication. The e-commerce giant reportedly opened around 100 new distribution facilities last month alone, on top of the 75 it had already opened earlier this year. Rumors of plans for around 1,000 smaller, localized delivery hubs across the country have circulated for a few weeks now, and while Amazon management has said little on the possibility, the testing of sidewalk-navigating delivery robots lends itself to the prospect. Walmart won't have to build such infrastructure or develop such technology.

Walmart's stores also allow it to offer a truly omnichannel shopping experience that gives consumers a choice of in-store or online shopping options that complement each other.

Yes, as much as consumers have fallen in love with online shopping and curbside pickup in the age of COVID-19, there's still a wide swath of consumers who prefer to shop in a store. There's one condition to their continued in-person shopping, though. According to a recent poll performed by Harris, 70% of U.S. consumers would prefer a completely contactless shopping experience. The Harris survey added that 72% of Americans were more likely to shop at a retail store that specifically offered contactless shopping and curbside pickup, while 35% of those consumers indicated they'd be fine with never actually setting foot inside a store again. Walmart+ facilitates both preferences, with the former being addressed inside stores by a Scan-n-Go shopping option exclusively available to Walmart+ members.

More of the right crowd could switch services

The Piplsay poll says only 11% of the U.S. population became part of the Walmart+ ecosystem during the first two weeks of its availability, but the numbers also indicate that only 53% of American consumers had ever heard of it. As more learn of its existence, more will give it a try.

More compelling for Walmart -- and more troubling for Amazon -- is the fact that Walmart appears to be drawing in the market's most prized consumers.

A similar poll taken by Digital Commerce 360 immediately before Walmart+ launched last month indicates that more than half of daily online shoppers were interested in the service, and nearly half of the people who shop "a few times a week" were likely to sign up.

Digital Commerce 360's survey also found that, of consumers who were already Prime members, 61% said they wouldn't sign up because they don't want to pay for two similar services. That superficially favors Amazon, but it doesn't guarantee that Amazon's hold on those shoppers is permanent. Those consumers may forever feel one subscription-based delivery option is enough, but their favorite could evolve as Walmart+ matures and becomes more proven. Remember, 19% of the new Walmart+ members Piplsay polled said they canceled Prime to do so, even before they really knew what Walmart+ would be like.

Don't misread the message. Prime's still got plenty of loyalists, and more people in the future will appreciate the entertainment features of Prime. Walmart is offering free 15-day trials of Walmart+, and Piplsay's survey only considered the very first 15 days of the service's existence. It's possible many of those enrollees have since canceled their subscriptions.

On balance, though, there's already enough consumer data in hand to suggest Amazon isn't going to simply breeze through the advent of Walmart+. It's going to shake things up.