There's a concerning reason Spectrum Cable's parent has been able to defy the cord-cutting trend.

For the second quarter in a row, Charter Communications (CHTR -1.70%) has done something a bit shocking: It added cable television customers, defying a cord-cutting trend that continues to work against rivals like AT&T (T 1.04%) and Comcast (CMCSA 0.28%). The company and its shareholders naturally celebrated the unlikely feat.

There's an important footnote to the matter that has not been quite as much discussed, though: Charter's Spectrum cable service is suddenly collecting a lot less revenue per subscriber. And with the entertainment companies that own and operate cable channels demanding ever-higher carriage fees from pay-TV companies, this trend isn't necessarily sustainable. 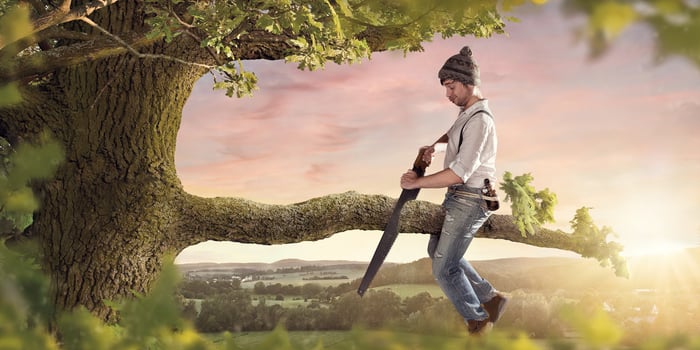 In the third quarter, Charter's Spectrum cable service picked up a net of 53,000 new residential customers and 14,000 new small business customers. That total net gain of 67,000 subscribers wasn't as impressive as Q2's net growth of 94,000 users -- 102,000 consumer accounts were added and a net 8,000 business customers were lost.

But consider the environment. Comcast's Xfinity lost a total of 273,000 cable subscribers in the same quarter as people found plenty of alternative ways to get television and streaming video content. AT&T lost a net of 627,000 cable television customers last quarter between its DirecTV, U-Verse, and AT&T TV Now brands. Both companies' results were just the latest in a long series of quarterly declines that have eroded the nation's cable television user base from more than 100 million households in 2014 to what research firm eMarketer predicts will be less than 78 million by the end of this year.

Before holding out Charter as an unlikely champion of the shrinking cable TV business, however, recognize that the company is making sacrifices to add customers to its pay-TV roster. It's charging them less.

The graphic below tells the tale, dividing the company's total residential cable revenue by its total residential cable customer headcount for each quarter going back to 2017. As would have been expected, prices gradually rose through late last year. This year though -- when its number of cable customers started to swell again -- monthly per-user revenue began a plunge back to 2018's levels. 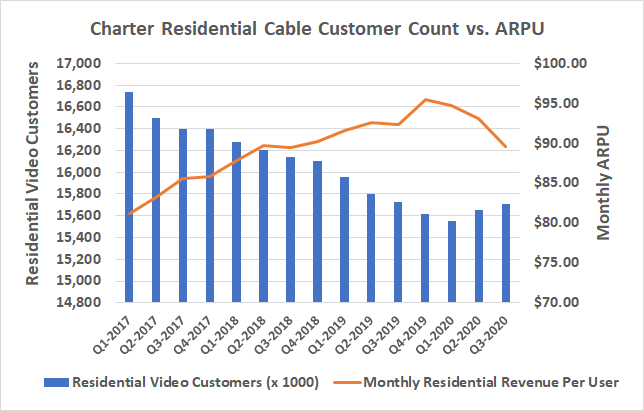 A couple of things should be mentioned about the chart's data. One of them is, it only considers residential customers. The other is, the calculation is based on Charter's reported revenue and reported customer counts for each quarter cited, which may or may not align with prices Spectrum holds out to new or even existing subscribers. Bundling may also impact how revenue is allocated.

Small businesses only make up about 3% of Comcast's cable customer base, however, and bundling's impact notwithstanding, the bigger trend speaks for itself.

It's particularly problematic given the steady price increases content providers like Walt Disney (DIS 0.84%) or ViacomCBS (NASDAQ: VIA) are imposing on cable companies for access to channels like ESPN, MTV, or CBS. While these carriage fees are not disclosed, cable television middlemen ranging from Alphabet (GOOG 1.96%) (GOOGL 1.96%), fuboTV (FUBO 7.08%), and even Charter's Spectrum have all upped their monthly prices this year, citing their increased costs to procure video entertainment media. Spectrum's broadcast surcharge to subscribers went up to the tune of nearly $3 per month. The fact that it has not been collecting more revenue per subscriber is a curious disconnect that may start to take a fiscal toll sooner than later.