It's been a miserable year for investors in Spirit AeroSystems Holdings (NYSE:SPR), with the company weighed down by the impact of the pandemic on airlines and issues at its most important customer. But in recent days, investors have received good news on both of those fronts, and Spirit shares have been upgraded, helping to propel the stock 13% higher on Tuesday afternoon.

Spirit AeroSystems, a former subsidiary of Boeing (NYSE:BA), still counts on its former parent for nearly three-quarters of its revenue. Spirit makes the fuselage and other components for Boeing's 737 MAX, a plane that has been grounded since March 2019 by safety concerns. 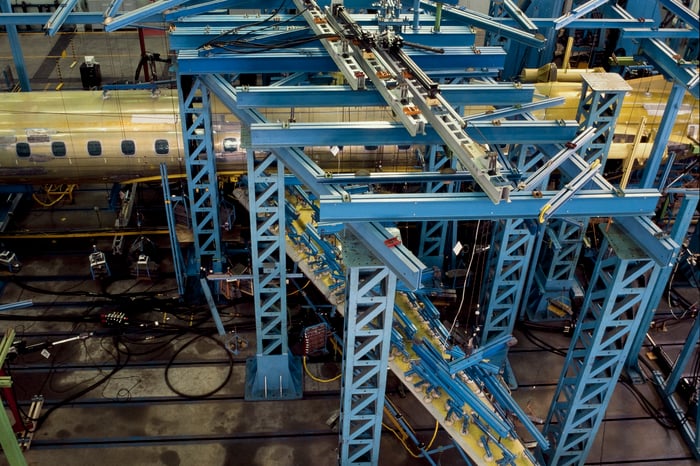 The entire aerospace sector jumped on Monday following a positive development in the race to find a coronavirus vaccine, which should help get people flying again and begin the recovery process for airlines.

On Tuesday we got word that the 737 MAX might be cleared to fly again as soon as next week, which would allow Boeing to work through its inventory of planes in storage and slowly begin to restart its assembly lines.

Spirit shares also got a boost from J.P. Morgan analyst Seth Seifman, who upgraded the stock to overweight from neutral and raised his price target to $36 from $26. Seifman said the vaccine news makes aerospace stocks "more investible," declaring that it appears the worst is now behind the sector.

Spirit AeroSystems does appear to be on the mend, but investors should be warned that the recovery is going to take time. Boeing now hopes to be manufacturing 30 737 MAX planes per month by 2022, well short of the rate of 50 per month it hoped to have established by now. While the plane is still likely to be a solid seller (it accounts for about 75% of Boeing's order book), it might never reach the sales totals investors had once envisioned for the program.

Looking past the crisis, Spirit is making progress lessening its reliance on Boeing. The company was able to close one of the two deals it struck prior to the pandemic to try to diversify away from its former parent, which should help it to build its relationship with Boeing archrival Airbus (OTC:EADSY) and grow its business in the future.

But all of that will take time. Even with the stock's jumps the last two days, the shares are still off nearly 60% for the year. For now, at least, there is likely a ceiling on how high Spirit shares can fly.