Computer graphics card manufacturer NVIDIA (NASDAQ:NVDA) has reported record earnings this year as the company moves to position itself for the future of technology. NVIDIA has been investing heavily in its data center arm to pave the way for artificial intelligence-based (AI) computing, and its stock price has jumped multiple times on strong revenue and news of its latest acquisitions.

All that good news has lead to a high valuation for the stock, leaving some investors to wonder: Is it still worth it to buy NVIDIA stock?

NVIDIA has increasingly faced pressure from high-performing competitor Advanced Micro Devices, but NVIDIA's management found a solid direction for future growth in data center development. And that has helped set the stage for the company's next steps.

NVIDIA's recent acquisitions of network company Mellanox Technologies and chipmaker Arm Holdings (in a $40 billion deal announced in September with Arm owner Softbank Group) come together and also spell a clear strategy for the future. In June 2020, NVIDIA unveiled an AI platform built on Mellanox technology, which detects security threats, predicts network failures, and guides predictive maintenance in supercomputing data centers. Added together with Arm's chip designs and technologies for general processors, NVIDIA now has access to the whole chip stack, across mobile phones, computers, and cloud-computing data centers. In a world where the Internet of Things (a world of always-connected access to the internet) is set to take over, NVIDIA has built a path for another decade of potential growth.

However, the company's value already jumped on its revenue growth, and so it could be argued that NVIDIA's potential is already priced in. But the age of AI computing is only beginning, and NVIDIA's forward-looking strategy has placed the company at the forefront of the movement.

The company's A100 data center graphics processing unit (GPU) has already been adopted by all major server vendors and cloud service providers, which is not wholly unexpected given that NVIDIA swept all categories for commercially available solutions in the latest MLPerf benchmark. Even more impressive is how eight of the world's top 10 supercomputers use NVIDIA GPUs or networking capabilities. In fact, the company is set to soon power the world's fastest AI supercomputer yet. 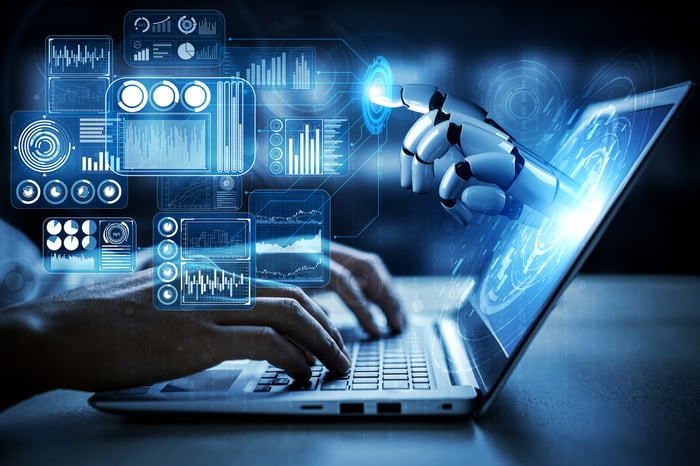 Why all this emphasis on AI? Companies are investing heavily in AI-powered data centers to improve security, conserve energy, reduce downtime, and optimize by automating tasks and data analysis. Given such investment, NVIDIA has developed and quickly marketed a GPU optimized for the accelerated, high-speed networking required in a more autonomous, AI-driven future.

With big-name companies like Amazon, Microsoft, and Alibaba adopting NVIDIA's AI technology to power smart cloud experiences, the future growth potential is still high. The costs of acquiring the companies necessary for NVIDIA's strategic growth were extensive, to the tune of $6.9 billion for Mellanox and a record $40 billion for Arm Holdings. But the addition of this technology has helped boost the 18% and 54% sequential data center growth in the first and second quarters of fiscal year 2021, and will likely continue to add tremendous value over the long term.

NVIDIA's stock price has fallen around 8.8% from highs reached earlier this month as the market's attention has shifted away from the tech sector, but the upcoming holiday season will likely generate new interest in the near future. The company is already set for solid growth, so savvy investors would be wise to buy the dip.