By most measures, The new project is firing on all cylinders. Walt Disney's (NYSE:DIS) streaming service Disney+ added another 16.2 million subscribers during the quarter ending on Oct. 3, bringing its total to 73.7 million. That's incredible, given that it only launched in November of last year, but it's also only the beginning. Industry analytics outfit Digital TV Research estimates Disney's flagship streaming product will serve more than 194 million customers by 2025, making it second only to Netflix (NASDAQ:NFLX).

Shareholders lauding Disney's expanded bet on streaming, however, may want to prepare for the worst even as they hope for the best. The pricing power Walt Disney enjoys with Disney+ has yet to be truly tested, and streaming service's bottom line may never fully replace the income currently being generated by the very movies and cable television business it's helping to displace. 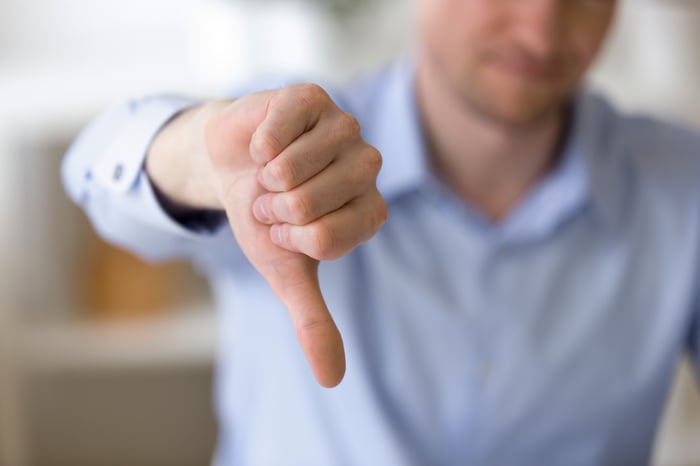 The company's stock price lately suggests that investors appreciate Walt Disney's potential for growth outside of a COVID-crimped environment, and most shareholders cheered management's recent decision to prioritize streaming. That certainly seems to be where the film and television industry's future lies.

The company reports it collected, on average, $4.52 per month per subscriber for Disney+ during its fourth fiscal quarter (which ended in October). That's less than the cost of $6.99 per month cited at the Disney+ website and even less than the $5.83 per month charge when dividing the service's full-year subscription price of $69.99 by 12 months. The discount reflects the pro-rated Disney+ portion of a bundle that includes ESPN+, Hulu, and Disney+ that sells for $12.99 per month. More important, that dirt-cheap effective price of only $4.52 per month makes Disney+ the lowest-priced streaming service of its kind. The cheapest plan Netflix offers starts at $8.99 per month, and at that price, consumers don't get much. Its top-tier service sells for $17.99 per month. AT&T's (NYSE:T) new HBO Max is priced at $14.99 per month.

Priced at under $5 per month apiece, Disney's streaming services collectively drove sales of $16.9 billion in its recently completed year. But it still took an operating loss of $2.8 billion.

Both were improvements, for the record. The top line was up 40% year over year, and the operating loss was $171 million less than the loss from the comparable quarter a year earlier. And given its young age, perhaps a more relevant comparison would be this year's second calendar quarter numbers. Those aren't especially more encouraging, though. For the three-month span ending in June, Disney's direct-to-consumer service and its international division turned $3.9 billion worth of revenue into an operating loss of $706 million. The top line sequentially improved 23%, but the loss only narrowed by 18%. 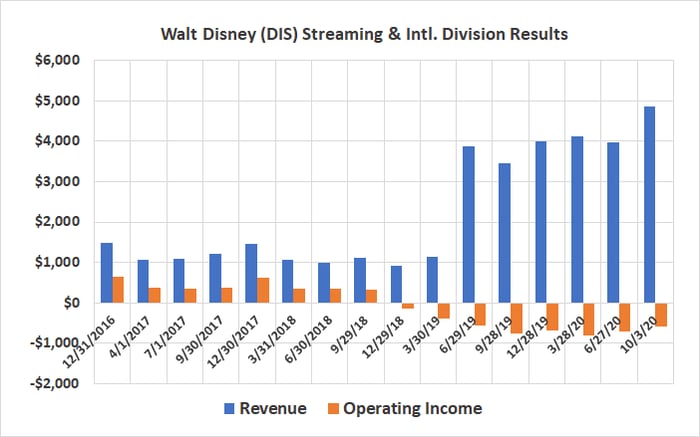 Fans of Disney's new focus will argue that its streaming services simply need more scale -- more paying customers -- to cover relatively fixed costs like production and promotion. Digital TV Research's estimate that Disney+ subscribers could reach 194 million in the near term would do the trick. A higher price would work just as well.

Both ideas present challenges, though. A higher price would make its streaming services less marketable to an unknown degree. But to procure more members at a lower price point, it may have to spend more on content.

Investors should also keep in mind that every streaming customer Walt Disney brings on board is a customer who is less likely to remain a cable TV subscriber or even a moviegoer.

That trend is already in place. Leichtman Research Group suggests the linear cable television industry in the U.S. lost around 1 million customers last quarter. That's another million cable customers that no longer contribute to the carriage fees Disney charges cable customers for access to its programming.

It matters simply because cable television is still the company's biggest and most profitable business. For the full year ending in September of last year, media networks accounted for $24.8 billion of the company's $69.6 billion worth of revenue and $7.5 billion of its operating income of $14.9 billion. Studio entertainment added $11.2 billion to the top line and generated $2.7 billion in operating income. This past year's cable business produced full-year revenue of $28.4 billion and operating profits of $9.0 billion.

As previously noted, Disney's streaming business drove sales of $16.9 billion in its recently completed year. Not bad. But with an operating loss of $2.8 billion, it's difficult to see it replacing the level of earnings produced by the very same cable TV and film business it's ultimately aiming to displace. 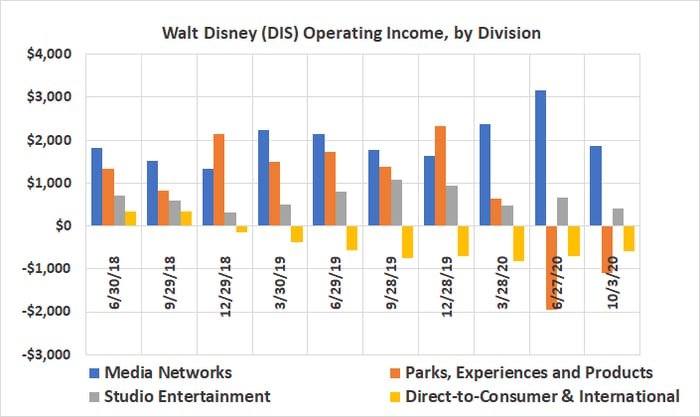 Sure, Walt Disney may somehow be able to orchestrate streaming growth that doesn't completely displace its media networks business while also selling streaming services at prices that fully replace the operating profits produced by its TV and film arms. Anything's possible.

But it's not likely, and that could be a problem. Until the company clarifies its streaming growth plans and streaming's impact on other ventures, investors should be thinking about companywide trade-offs and not remain singularly focused on its best growth engine.