Please ensure Javascript is enabled for purposes of website accessibility
Free Article Join Over 1 Million Premium Members And Get More In-Depth Stock Guidance and Research
By Rich Duprey - Nov 25, 2020 at 7:31AM

The streaming service had a phenomenal first year, but a repeat may be difficult.

It's all Disney+ all the time for Walt Disney ( DIS -0.67% ), as the streaming video service salvaged an otherwise dreary earnings report.

Racking up an astounding 73.7 million subscribers in its first year of service, an incredible launch that puts it within striking distance of Netflix ( NFLX -2.33% ), which has some 195 million subscribers, Disney has restructured itself to keep streaming video front and center.

Yet as analysts scramble to boost their subscriber growth projections for the coming years, let's see whether Disney+ can retain its stellar positioning and even threaten Netflix for dominance. 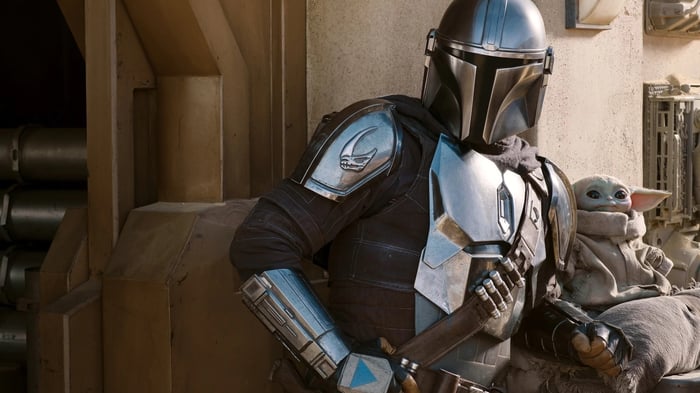 While many of those may have found enough programming to justify renewing, others -- arguably a majority -- will simply let their subscriptions lapse. Without having any skin in the game, keeping them around is more difficult. Yet even the losses shouldn't be too great.

Verizon continues to offer free Disney+ subscriptions, but now it's a three-way bundle of Disney+, Hulu, and ESPN+ as long as subscribers keep their unlimited wireless accounts.

Considering that Disney just reported it added 2 million new ESPN+ subscribers in the quarter while adding 1.1 million Hulu subscribers, it seems plausible that many of those came through Verizon as well. But because the wireless carrier is footing the bill for as long as they remain unlimited wireless customers, there's no incentive for those new streaming subscriptions to cancel.

Content for Disney+, though, is more difficult to grade very high. Other than The Mandalorian, Hamilton, and maybe one or two other shows, programming has been pretty thin.

According to one analysis, Netflix released 67 new Originals in October alone, compared to just five exclusives or original shows for Disney. While some contend Netflix is pursuing a quantity over quality strategy, the analysis suggests that's not the case. Based on IMDb ratings of the shows, Netflix's torrent of programming averaged a 6.7 rating compared to the 7.6 rating average for the handful of Disney+ shows.

The first year seems to have been one more of catering to Disney devotees, though even that is not a particularly strong argument.

Disney+ has nearly two dozen film franchises where the entire collection is not available for viewing, and that doesn't even cover Star Wars, the Marvel Cinematic Universe, or The Muppets. In fact, over 600 Disney-owned films and shows, both from its own catalog and those from ABC and 20th Century Studios that it acquired, remain in mothballs.

Certainly more will be released at a later date, but when comparing what's on Disney+ to what's available on Netflix, the latter is in a much stronger position.

It's also not certain that Premier Access, the pay-per-view programming above and beyond a Disney+ subscription, will bring that much to the service.

The debut of Mulan as the first Premier Access movie was far from a success. It may have helped Disney recoup some of the costs associated with filming the live-action remake, but by going directly to pay-per-view it lost out on potential profits a theatrical release provides. For example, the Aladdin remake generated over $1 billion in global box office receipts.

Mulan, of course, was sabotaged by the COVID-19 outbreak, but it's why most studios are deferring the release of their tentpole films to 2021 rather than going direct to streaming. It's why Disney delayed the premier of Black Widow. Going to that well again is difficult.

It seems clear that Disney+ had a solid first year, and its National Geographic channel, a plethora of high-definition content, and a few outlier shows indicate the service could have broader appeal. Yet the channel hasn't laid out a convincing argument for being a service geared toward anything other than families with young children, and that will limit its upside potential.

With theme parks and theaters either closed or operating at limited capacity, cruise ships drydocked, and advertisers still being miserly with their budgets, Disney needs Disney+ more than ever.

It's just difficult to see Disney+ producing a repeat of the first year, meaning Netflix, with its broader appeal and prolific content production, has little to fear from the streaming service. It will of necessity remain a star turn for the media giant, but one that won't shine as brightly going forward.