The new Disney+ streaming service had barely gotten off the ground when Netflix (NASDAQ:NFLX) responded to the launch by announcing a deal with kids' TV network Nickelodeon. The deal will produce original animated content based on its library of characters as well as new characters created just for the platform.

Although such partnerships take time to negotiate, and this one was in the works for a while, it's clear Netflix is desperate to blunt Disney's debut by having programming to attract children. Announcing it just days after Disney+ launched with over 10 million subscribers indicates that Netflix wanted to grab a bit of the spotlight that was beaming brightly on its rival.

While SpongeBob SquarePants and Invader Zim no doubt have legions of youthful fans, the characters are not going to mute the buzz Disney+ is generating surrounding the release of its live-action Star Wars series, The Mandalorian. 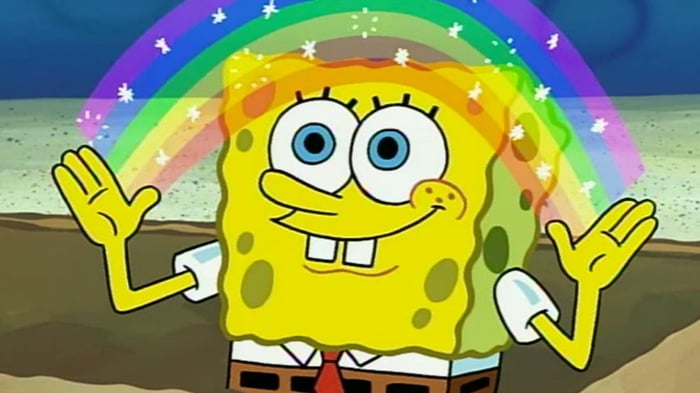 Netflix long planned for the eventuality of its movie partners one day branching off on their own and pulling their content from its service. It's why it invested tens of billions of dollars in original content, especially in kids' programming.

By the time Disney announced it would be yanking franchises such as Marvel, Star Wars, Toy Story, and Frozen from Netflix, the streaming platform had already produced some 60 kids' shows on its own.

And it's not the only one afraid of having to compete against the 800-pound gorilla of children's programming. AT&T's WarnerMedia, for example, recently announced HBO Max will partner with Sesame Street to stream more than 4,500 episodes from the legendary show's 50-year history.

But Disney+ has its own advantages, like being able to offer programming bundles with Disney-owned Hulu and ESPN+ that are ad-supported and can help underwrite the cost of Disney+ ad-free offerings.

Netflix's new deal with Nickelodeon envisions not only new TV shows based on the channel's most popular characters, but feature-length movies as well. The New York Times reports it even means a musical based on the SpongeBob character Squidward.

Netflix is obviously concerned about parents defecting from its platform to satisfy their offspring's desire for content. At the outset, there really shouldn't be any impact from the Disney+ launch as viewers will want to see whether the new service is worth it.

Many movie watchers have a decadelong relationship with Netflix that is not easily severed, not even when the service raised prices over the years. Yet it's also true that complaints are growing around the quality of the original programming Netflix is producing to replace the lost content as the streaming service prioritized quantity. So Netflix needs this partnership with Nickelodeon to work.

There are a raft of shows in Nickelodeon's library that a new generation of kids would undoubtedly love to see, such as Blues Clues, Rugrats, and Teenage Mutant Ninja Turtles, which the channel had previously announced it was rebooting. Nickelodeon, in fact, had said as long ago as March 2018 that it would be producing 800 new episodes.

Nickelodeon is owned by Viacom (NASDAQ: VIA)(NASDAQ:VIAB), which is merging with CBS, which offers CBS All Access and Showtime on-demand programming; and Viacom offers Pluto TV, a live-TV service that has some 18 million active users. So it's curious that Nickelodeon chose to partner with Netflix instead of keeping it exclusive for itself. It probably means Netflix was willing to pay handsomely to help produce the new programming, a sign that it is desperate to remain relevant in children's TV.

The streaming-services field is crowded and getting more so, which means we are likely to see Netflix make more of these big partnership deals with other studios in a desperate bid to stave off customer defections.