Please ensure Javascript is enabled for purposes of website accessibility
Free Article Join Over 1 Million Premium Members And Get More In-Depth Stock Guidance and Research
By Rich Duprey - Nov 19, 2019 at 9:28AM

The new TV series might even lure back disaffected "Star Wars" movie fans.

Forget about Disney's ( DIS -0.29% ) new streaming service launch stumbling out of the gate because crushing demand stifled access to Disney+ for hours. Instead, look at the stunning achievement of The Mandalorian, the first live-action Star Wars TV series, which debuted on the streaming service's first day of operations.

If the rest of the series continues as Episode 1 began, it alone will be worth the $6.99 monthly subscription fee for Disney+. I'm no Star Wars fanboy (in fact, you could probably call me a hater), but The Mandalorian was so good that it might be able to repair all the damage Disney's ownership of the Star Wars franchise has caused with its base. 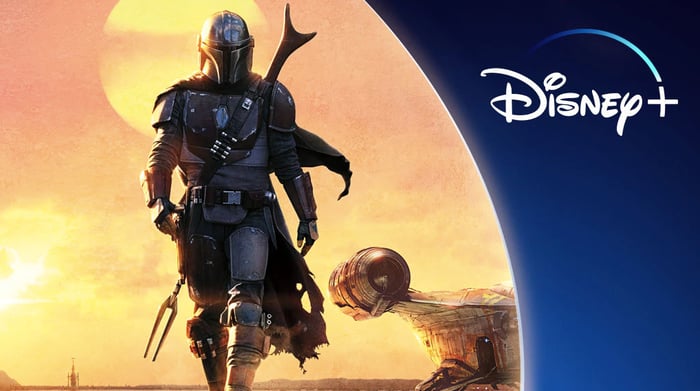 The service outages that marked the launch of Disney+ already show consumers were clamoring for its programming. More than 10 million people have signed up for the service. Although that number pales in comparison to Netflix's ( NFLX -0.26% ) 158 million global subscribers, it has to give the streaming giant pause.

Disney+ was launched first in the Netherlands for a trial run before opening for service in the U.S. and Canada. Considering Netflix has 60.6 million U.S. subscribers after 22 years in business, Disney can readily congratulate itself on having a monumental success on its hands that could readily challenge its rival in the years ahead.

Although it might be a while before the entertainment giant's full catalog of content is available on Disney+, and people are signing up in droves to see the likes of Marvel Comics films, Disney princess movies, and more, The Mandalorian has an important task all its own: healing the rift between the film studio and the franchise's massive base of fans.

A tough obstacle to surmount

While The Last Jedi was a commercial success, generating $1.3 billion worldwide, it only earned a 44% score from movie audiences on Rotten Tomatoes (professional movie critics gave it a 91%).

Many point to director Rian Johnson trashing all of the history and mythos surrounding Star Wars and its characters, especially Luke Skywalker, as the reason fans revolted. And Disney did itself no service when it hired Game of Thrones showrunners David Benioff and David Weiss to direct a new Star Wars trilogy after the disastrous last season of what, until then, had been television's most successful series.

The two have since backed out of helming the films, and though Disney asserts there will still be a trilogy, Star Wars feature films will be "on hiatus" for a few years. While ostensibly focusing on producing The Mandalorian, Disney undoubtedly also hopes the rancor created by the "Disney Star Wars" films -- separating them from when Lucasfilm was independent of the studio -- will have subsided.

Why the TV series is better

The Mandalorian can bridge that gap. The first episode showed what good screenwriting and storytelling can produce, and it's commendable that Disney has put considerable financial resources behind the show.

While the series is essentially themed along the lines of an old-time western with a Star Wars milieu pasted on top, it retains all of the characteristics of the franchise's movies that fans loved. The diverse peoples that inhabit the broad landscapes, the humor, the action, and the mystery are all present. And without giving away any spoilers, the TV series shows the potential for the Mandalorian character to have an interesting arc, something the recent films' lead, Rey, lacks.

Rey is what is commonly called a "Mary Sue," a perfect character who is able to perform tasks better than anyone else with minimal training. Unlike Luke Skywalker, who struggled to learn to use the Force under Yoda's tutelage in the swamps, Rey knows with hardly any training at all how to fly the Millennium Falcon, use Jedi mind tricks on stormtroopers, and defeat Kylo Ren, a much more powerful Jedi. There's no struggle, no obstacles to overcome, and no character growth. She is suddenly front and center, and she's the best.

The Mandalorian has the potential to make those turned off by such portrayals return to the fold. Because the series is so enjoyable (and yes, only one episode has aired at the time of writing), it bodes well not only for Disney+ luring in both Star Wars fans and a broad, general audience but also for future films in the franchise and their box office success.