Cancer is a tricky disease, and one of its ploys is producing tumors that cloak themselves with an increased level of CD47 -- a protein normally associated with healthy cells. This tells the immune system not to attack, and it turns out this so-called "don't eat me" function is a very effective way for solid cancer tumors to hide in plain sight in our bodies.

In 2010, researchers at Stanford showed how nearly all cancer cells used this tool. By 2015, they had developed an antibody to block the cloaking signal and alert specialized immune cells to attack. One of the many companies using this knowledge to develop cancer treatments is Trillium Therapeutics (NASDAQ:TRIL). The stock is up 15 times in value since the beginning of the year, and given its market cap of only $1.8 billion, the shares might just be getting started. 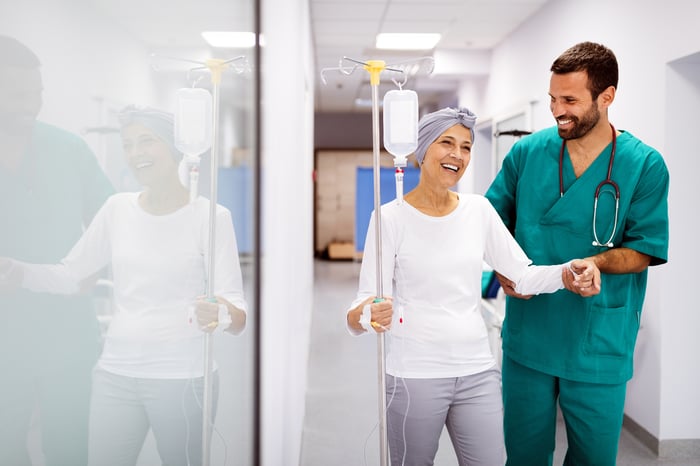 Trillium is working on two programs to block the CD47 signal. That might not seem like a lot, but this focused approach is actually one of the things I like most about the company. Upon joining the company in September 2019, CEO Jan Skvarka immediately began streamlining by prioritizing the most promising opportunities, reducing staff and focusing development on two lead programs, TTI-621 and TTI-622.

These two candidates are currently being tested to fight blood cancers and solid tumors. They not only block the "don't eat me" signal, they also trigger the "eat me" alert that gets the immune system to attack. (TTI-621 provides a strong "eat me" alert, while TTI-622's is moderate.)

There are a few reasons investors and researchers are so excited about the potential. For one, unlike other CD47 blockers, these don't bind to red blood cells; this reduces the risk of anemia, with less medicine needed to have an impact and no interference with transfusion medicines. In addition, these blockers are half the molecular weight of traditional monoclonal antibodies -- making it easier for cells to take in the medicine, increasing efficacy.

How the trials are going

So far, the results from clinical trials evaluating safety and dosing of the two candidates have been stellar, with both demonstrating a response in 33% of the patients treated at various low doses. TTI-621, which demonstrated safety at 1.4mg/kg in patients with blood-related cancers that had not responded to previous treatments, has advanced on its four-part phase 1 journey to a test at 2mg/kg. The improvement seen by patients appeared to be dose-dependent: the higher the dose, the bigger the improvement. This is encouraging, as most CD47 blockers are given at the much higher dose of 30mg/kg. This leaves a lot of room for Trillium's candidate to have a bigger impact.

Similarly, TTI-622 was tested in patients with a form of cancer that grows in lymph nodes at many doses up to 8mg/kg. The positive results, combined with no significant safety events, have pushed the drug into a test at the higher 12mg/kg dose level.

Trillium's drug candidates are similar to those from Forty-Seven, which was acquired by Gilead Sciences (NASDAQ:GILD) in March for $5 billion. But while the CD47 blocking drug from Forty-Seven, magrolimab, has been studied in combination with other drugs, Trillium's candidates have both demonstrated results on their own. Further validating the CD47-blocking approach, magrolimab received a breakthrough designation from the U.S. Food and Drug Administration (FDA) in September. Trillium management is set to present an update on its programs in early December at the annual meeting of the American Society for Hematology (ASH).

No shortage of cash -- or opportunity

Trillium's focus on the most promising opportunities, its streamlining of operations, and its demonstrated scientific success have all helped the company to raise capital in multiple ways. During the third quarter, ending Sept. 30, the company sold shares to Pfizer (NYSE:PFE) and the public. The offering to Pfizer raised $25 million while the secondary offering of stock to the public brought in $150 million.

The extra cash is important. For small biotech companies, it's often instructive to look at the burn rate -- how fast they are spending money compared to how much cash they have -- to determine whether they can afford upcoming clinical trials. With these cash infusions in the latest quarter, the company should have no worries for some time. The $292 million in cash easily covers the $22 million spent in the past 12 months -- many times over. Even if costs escalate with advancing clinical trials, there should be no cash crunch in Trillium's future.

Will the stock make you rich in 2021? No investment should be made with the goal of getting rich in the next year, but I do expect Trillium's success to continue, starting with positive results at next month's ASH conference. Given what management describes as its "best-in-class monotherapy activity," plenty of cash, and a competitor that was recently acquired for $5 billion, I expect more investors to realize the opportunity for Trillium Therapeutics justifies a market capitalization several times its current size.