Pfizer may have gotten a fantastic deal on this clinical-stage oncology company.

Shares of the developmental-stage biotech Trillium Therapeutics (TRIL) are up by a whopping 192% in pre-market trading Monday morning. The cancer company's stock is surging this morning in response to a $2.26 billion buyout agreement with pharma heavyweight Pfizer (PFE -0.12%).

Pfizer opened a starter position of $25 million in Trillium last year. Per the terms of this latest deal, the pharma titan agreed to acquire the biotech's remaining shares for $18.50 apiece, which represents a hefty 203.8% premium compared to the stock's closing price last Friday. 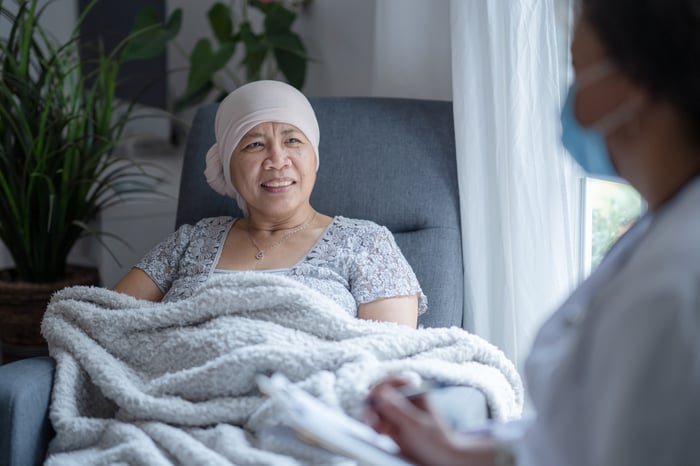 This deal is significant for both Pfizer's and Trillium's shareholders for a number of reasons. On Pfizer's side of the equation, for example, the drugmaker will significantly bolster its blood cancer pipeline via Trillium's potentially game-changing CD47 (the don't-eat-me signal) line of therapeutics. Trillium, by contrast, is taking an enormous amount of risk off the table for its shareholders by accepting this buyout offer. The company's CD47 pipeline, after all, is still in its infancy from a developmental standpoint.

The bad news for Trillium's shareholders is that Pfizer may have gotten a downright bargain by acquiring the company at this early juncture in its lifecycle. While a lot can go wrong with early stage cancer companies, the fact of the matter is that Trillium's CD47 pipeline might also harbor multiple blockbuster blood cancer medicines.

Driving this point home, Gilead Sciences snapped up the rival CD47 player Forty Seven for $4.9 billion last year -- illustrating the potentially enormous value in this novel form of cancer therapeutics in general. To be fair, Forty Seven was much further along in the clinical trials process than Trillium when it was bought out. But this prior deal in the space strongly suggests that the biotech's braintrust might have left a rather large pile of money on the table by selling out now.