Please ensure Javascript is enabled for purposes of website accessibility
Log In Help Join The Motley Fool
Free Article Join Over 1 Million Premium Members And Get More In-Depth Stock Guidance and Research
By Jason Hawthorne - Jan 24, 2021 at 10:30AM

This promising cancer fighter might sell out this year to cash in on its potential.

Science seems to develop new and more innovative ways to fight cancer every year, and it shows up in survival statistics. Between 2014 and 2017, death rates decreased in eight of the 10 most common cancers for both men and women. Still, 600,000 Americans each year die of the disease.

That's why billions of dollars continue to be spent annually on research. One approach, trying to inhibit the ability of cancer cells to mask themselves using a special protein called CD47, has gained traction in the past few years. The protein, found on the surface of healthy cells, is overexpressed on cancer cells to tell the immune system to move on, or "don't eat me".

Last March, Gilead Sciences agreed to buy aptly named Forty Seven, a company whose drug had shown promise in fighting cancer using the approach, for $4.9 billion. The move paid off as the drug, magrolimab, was granted fast-track designation by the Food and Drug Administration in September.

Forty Seven isn't the only company trying to block cancer's clever trick. Among the group, Trillium Therapeutics (TRIL) has two drug programs that have shown promise and the excitement has driven the stock up more than 1300% since the beginning of 2020. After those gains, there are at least three reasons Trillium might not survive 2021 as a stand-alone company. 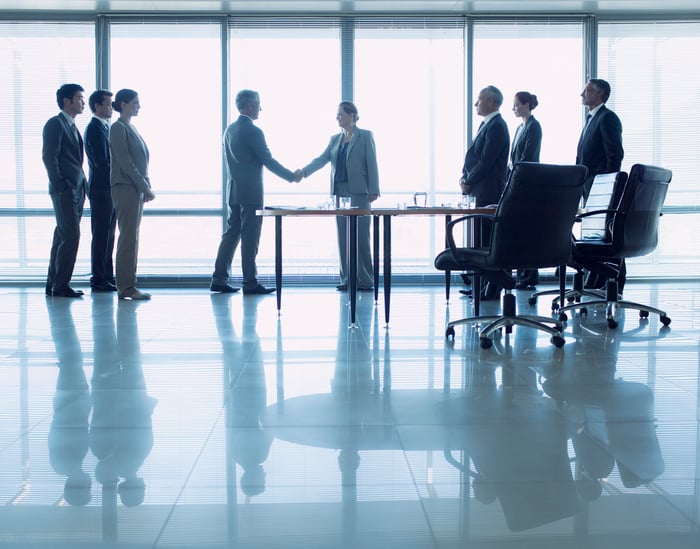 So far, Trillium's two drug candidates have produced a positive response correlated to the dosage given without facing the type of safety events that would indicate a maximum dosage has been reached. This is good news because it means researchers can continue testing higher doses to get an even better response. Unlike magrolimab, which only blocks cancer's "don't eat me" flag, Trillium's assets also deliver the "eat" signal, prompting the immune system to attack the cancerous cells. This unique property could make the company irresistible to a larger biotech working on cancer treatments.

Pfizer (PFE 3.59%) has already taken an interest. In September, the giant pharma company invested $25 million in Trillium through a purchase of common stock. Trillium CEO Jan Skvarka hasn't commented on any potential sale, but he noted in a September interview the importance of structuring the Pfizer deal so that the company left its options open.

Trillium plans to provide investors with new data and a plan forward in the first quarter of 2021. Unless there are surprises, the cost of acquiring the company will continue to rise with the confidence that its assets can be brought to market.

Trillium didn't discover the link between CD47 and cancer, but the company has had success where others have failed. Celgene, the company Bristol-Myers Squibb (BMY 0.30%) acquired in a $74 billion deal at the beginning of 2019, had been seen as a leader in the CD47 field. That was until it terminated a phase 1 study of its CD47 asset as a monotherapy in 2018. A phase 1 dose-finding study that combines Celgene's asset with another medication is still slated to wrap up in February, but not much news is expected. Similarly, Surface Oncology shut down its CD47 program in 2018 after toxicity concerns.

On the other hand, ALX Oncology has offered promising data on blocking cancer's CD47 signal when combined with other treatments. ALX has only one asset it is exploring versus Trillium's two; however, that one asset has made it to phase 1 trials to treat four different types of cancer. While ALX is not a monotherapy, its combo results and broad approach give it similar potential to Trillium.

For larger pharmaceutical companies that want to stay at the cutting edge of cancer treatments, but fear an expensive failure, acquiring Trillium would make a lot of sense. After all, one way to price the company is to estimate how much it would cost a larger drug company to build the CD47 program on their own. From that perspective, Trillium could be worth billions.

If Trillium's clinical trials continue to produce positive results, there will be a lot of pressure on the management team to sell the company and limit the risk of an all or nothing outcome. Will it be Pfizer, the current strategic partner? Will Bristol-Myers Squibb try to resurrect Celgene's CD47 program by buying Trillium? Or, maybe it will be another pharmaceutical company trying to differentiate their oncology pipeline.

In any event, the company won't have the hurdle of a founder CEO with a controlling block of shares to jump over. CEO Jan Skvarka is a graduate of Harvard Business School and former partner at global consultancy Bain & Co. who only joined Trillium in September 2019. It's far more likely he will unemotionally weigh the risk and reward as the company navigates the drug development gauntlet. At only 53 years old, he is also not likely to blanch at running a unit of a larger organization.

Only time will tell whether this hot stock survives 2021 without being bought out. In the meantime, investors will wait for Trillium's update sometime in the first quarter.