The stock market hasn't been kind to fossil fuel stocks in 2020. So far this year, the Energy Select Sector SPDR ETF, which tracks the oil and natural gas sector, is down 40% compared to a respectable 10% gain for the S&P 500. In August, one of the biggest names in oil and gas, ExxonMobil (NYSE:XOM), was removed from the Dow after nearly 100 years.

Weeks later, Chevron (NYSE:CVX) (which has been in the DJIA since 2008) replaced ExxonMobil as the largest oil major by market capitalization. The honor may have rung somewhat hollow, however, considering that shares of both companies are still way down this year. Chevron only topped Exxon because it's down by less.

Despite poor performances by companies throughout the fossil fuel industry, there could be cause for optimism about Chevron in 2021. Here are a few reasons why picking up a few shares of Chevron could be a good decision for you. 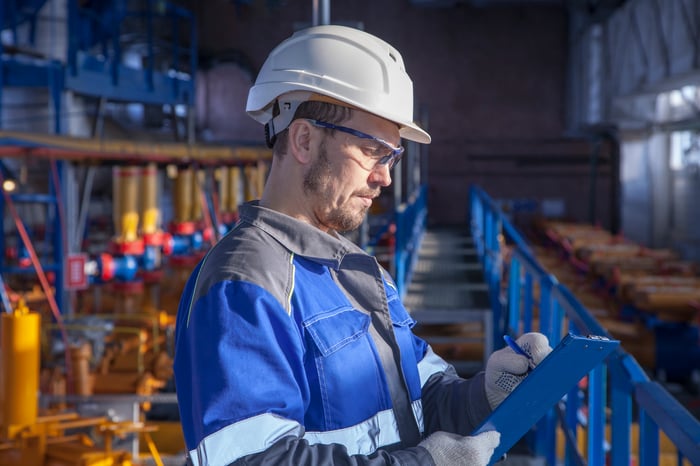 If you're considering investing in Chevron stock right now, there's a good chance you're doing so because of its 6% dividend yield. And why not? A 6% return is close to what many investors hope to make from the capital gains on their stocks in a year. But many of its peers, like Royal Dutch Shell, BP, Eni, and Equinor, have cut their dividends by 50% or more in 2020. Chevron didn't. In fact, it raised its quarterly payout from $1.19 per share to $1.29 per share in 2020. This was its 32nd consecutive year of payout hikes, making it one of two oil sector Dividend Aristocrats.

The real question is whether Chevron's dividend is stable or not. Unfortunately, the company generated only $1.48 billion in free cash flow (FCF) for the first nine months of 2020, compared to $7.19 billion in dividend payments. Its finances improved markedly in the third quarter, but its massive earnings and FCF loss in the second quarter are weighing on it. 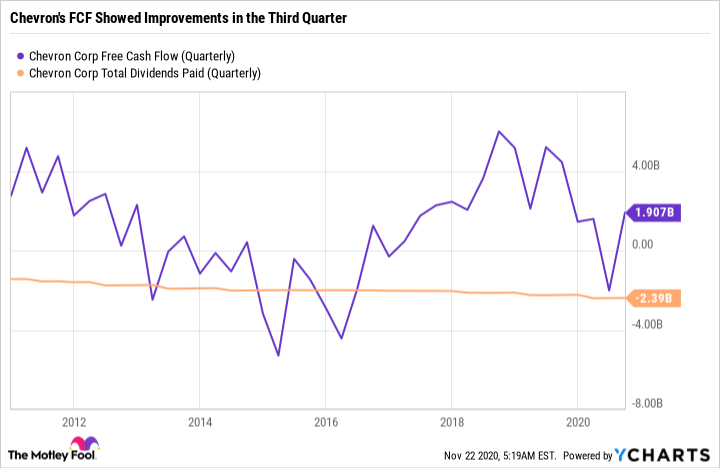 The silver lining is that Chevron's third-quarter FCF was nearly $2 billion -- just 20% less than its dividend payout for the period -- a sign the company is moving back toward having an FCF surplus after shareholders have been paid. Management noted that its reduced capital spending in 2020 and an adjusted 2021 capital budget of $14 billion (close to expected 2020 spending) should help the company sustain profitability in a lower oil price environment.

Although generally strong, Chevron's quarterly FCF can be volatile. When it slides, management's ace in the hole is using cash on the balance sheet to cover dividends. The company has done a better job of keeping debt off its balance sheet than its peers; of the five largest oil majors, it sports the least-leveraged, lowest net debt position. This is all the more impressive when you consider that Chevron is now the largest oil major by market capitalization traded on the U.S. market. 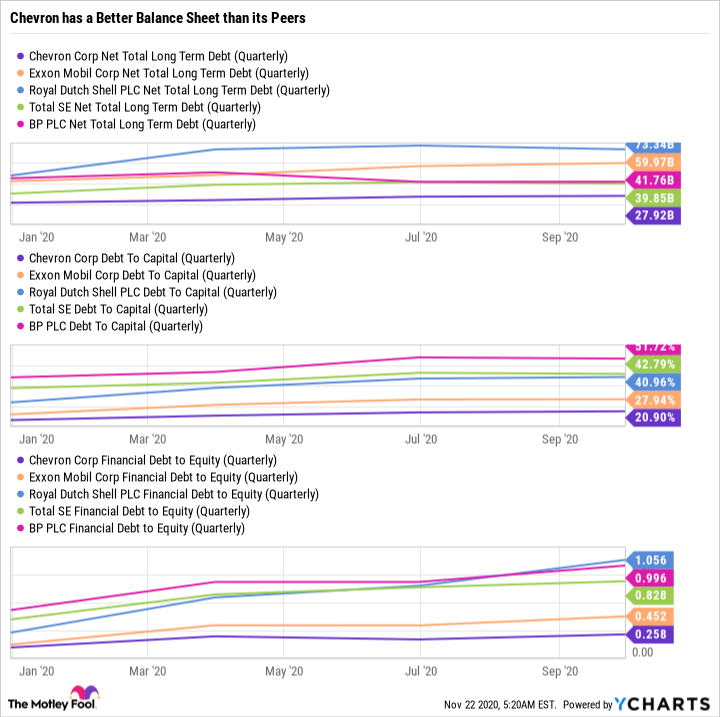 Chevron's added some debt to its balance sheet in 2020, increasing its leverage from 2019. However, the company's financial health remains strong, especially considering the circumstances.

Long-term headwinds and some speculation

Like other oil companies, Chevron faces a number of long-term headwinds. Unlike other top energy stocks that are moving away from a reliance on oil, it's comparatively more committed to a fossil-fuel-focused future. It's investing in renewables, but hasn't been as vocal about aiming for carbon neutrality as some of its competitors.

This decision doesn't necessarily mean Chevron cares less about the environment than its peers. Instead, it's probably a result of the company earning better returns from oil and gas than they do. If Chevron's peers had its portfolio and balance sheet, it's unlikely they would be as anxious to aggressively transition toward renewable energy. 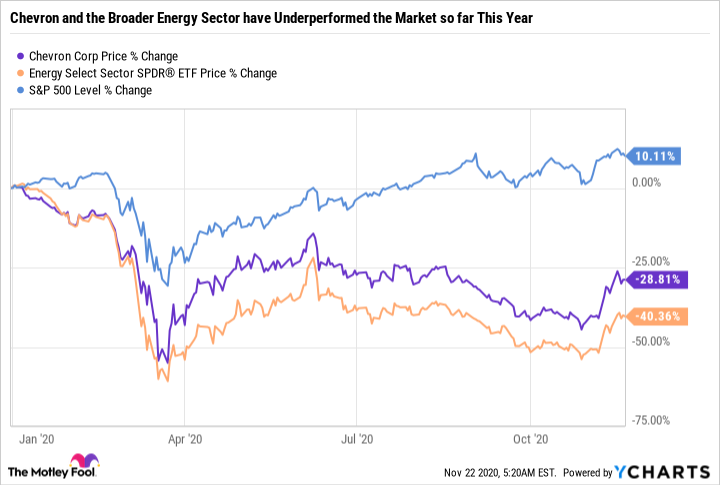 The short-term downside of Chevron's commitment to oil and gas is that its earnings are weighted heavier toward production compared to its big oil peers. The long-term downside is its vulnerability to permanently lower oil prices. But even if demand for oil and gas decreases over the coming decades -- which it very well could -- this company could still succeed if many of its competitors partially transition to renewables. European majors BP and Total are positioning themselves for a green energy transition. By 2030, BP plans to cut its oil and gas production by 40%. Total expects its oil production will comprise just 35% of sales in 2030 compared to 55% of sales in 2019. If the demand for oil and gas stays somewhat consistent, but supply falls because some companies shift away from extracting it, then Chevron could enjoy some pricing power.

In sum, Chevron is really good at producing and selling oil and gas. Even if renewables overtake those energy sources, there will likely be sizable global demand for them for many decades to come. There's a case for companies like Shell to reenvision themselves. Shell plans to cut thousands of jobs amid its shift to carbon neutrality. But Chevron seems better suited to staying an oil-focused company.

One of the best ways to invest in oil and gas

There's a baseline degree of industry risk if you're investing in oil and gas. After an abysmal second quarter, Q3 was a big test for Chevron. Its FCF improvement was encouraging, and its balance sheet remains the best in the industry. With shares still down by more than 20% year to date, Chevron looks like a good dividend stock to buy now.