NIO said it won't be affected by a big looming problem for the auto industry in China.

Shares of Chinese electric-vehicle maker NIO ( NIO -11.19% ) were trading higher on Monday after the company said that it doesn't expect its growth plans to be affected by a looming shortage of automotive semiconductor components.

As of 2 p.m. EST, NIO's American depositary shares were up about 4.8% from Friday's closing price.

A senior NIO executive told reporters from China's Financial Associated Press that the company has been prepared for a looming shortage of automotive semiconductor components, and that the shortage will have "no impact for the time being" on NIO's plans to expand production amid high demand. 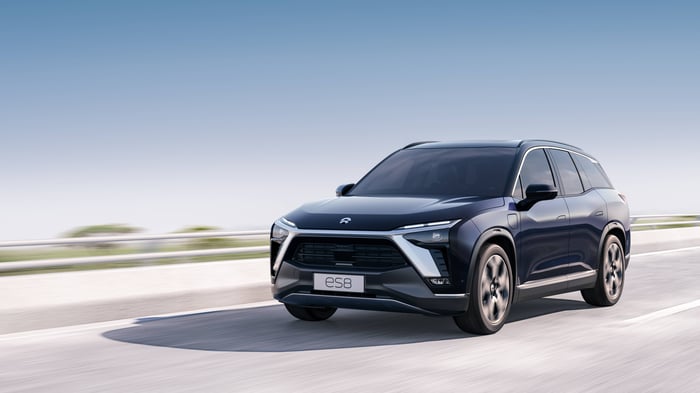 That's good news for NIO investors. Shares of several automotive companies that do business in China fell on Friday after Volkswagen ( VWAGY -2.54% ) and two German auto suppliers, Continental ( CTTA.Y -3.94% ) and Bosch, warned that a shortage of semiconductor components could soon affect auto production in China. Several Volkswagen plants in China were reportedly idled due to chip shortages over the weekend.

Manufacturing throughout China slowed early in 2020 during lockdowns imposed to slow the spread of the COVID-19 virus. But demand for new vehicles in China has rebounded sharply since those lockdowns. However, the production of automotive semiconductor components hasn't quite kept pace.

Continental said in a statement on Friday that while semiconductor manufacturers have begun expanding manufacturing capacity, that added capacity likely won't be available for six to nine months. Auto investors holding NIO's shares should read the executive's comments in that context: While there's no problem for the time being, it's something to keep in mind.