Brookfield Renewable (NYSE:BEP)(NYSE:BEPC) is one of the world's leading renewable energy companies. It currently owns 19.3 gigawatts (GW) of capacity, which is enough to power 5 million homes for a year. Hydroelectric is the company's largest contributor, at 7.9 GW of its generating capacity and 64% of its cash flow.

However, while hydro is Brookfield's biggest moneymaker today, it envisions a solar-powered future. It took another step toward that ambitious goal by recently agreeing to acquire the solar energy business of utility Exelon (NASDAQ:EXC). 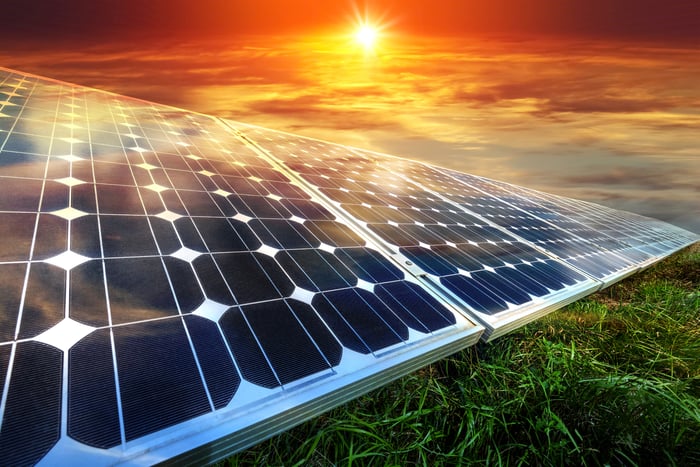 Brookfield and its institutional partners are purchasing Exelon's entire solar energy business. It currently consists of 360 megawatts of generation either in operation or under construction across nearly 600 sites throughout the U.S. Brookfield is paying $810 million for the assets in a deal that should close in the first half of next year.

The transaction will enable Exelon to unlock the value of its solar assets. The company recently unveiled that it's conducting a strategic review of its corporate structure to determine the best way to create value for its shareholders. The company is considering whether to separate its generation and utility operations. While a separation is still possible, the company could sell additional power-generating assets if that would create the most shareholder value.

Meanwhile, Brookfield picks up additional solar energy assets to bolster its platform. It continues the company's strategy of growing its scale, enabling it to reduce its operating costs and generate more cash from these assets.

From zero to meaningful in less than five years

Solar energy is currently the smallest contributor in Brookfield's portfolio, at 9% of its cash flow. However, considering that the company didn't operate any solar energy assets in 2015, that's an impressive number.

The company currently operates 3.45 GW of solar energy assets, which includes 2.6 GW of utility-scale projects and 850 MW of distributed generation assets (i.e., on-site generation such as rooftop solar). The company primarily built that portfolio via acquisition, jump-started by its investments in TerraForm Power and TerraForm Global in 2017. It has since enhanced its solar energy platform by making additional acquisitions and joint ventures.

The Spanish solar energy project developer had 273 MW of operating assets, 1.413 GW under construction, and another 4.8 GW development pipeline. Meanwhile, in July of this year, Brookfield agreed to acquire a 1.2 GW solar development project in Brazil. It's one of the world's largest solar developments, which should start generating power in early 2023.

In addition to those large-scale deals, Brookfield has also acquired several smaller assets. For example, in the fourth quarter of last year, it bought 14 solar development projects in Brazil via two transactions totaling 428 MW. The company also used TerrForm Power to acquire solar energy assets in the U.S. and Europe before purchasing the rest of that company that it didn't already own earlier this year.

As a result of these deals, Brookfield now has more than 10 GW of solar energy projects in its development pipeline, which is more than half of its 18.3 GW backlog. Meanwhile, more deals for both operating assets and development projects seems likely. Brookfield Renewable wrote in its second-quarter letter to investors that:

Our solar business has grown substantially over the last five years...As a result of technology advances and reductions in construction costs, solar can stand on its own without subsidies and more importantly, is now among the lowest cost sources of conventional power globally. To put this in perspective, solar costs over the last five years-the period in which we have built our solar business-have gone from over $4 per watt to install, to less than a $1 per watt in almost all jurisdictions around the world. As a result of these favorable economics, as well as the renewable nature and perpetual source of free energy, we believe it is possible that in ten years from now the majority of the production capacity of Brookfield Renewable will be solar capacity. It is not that we do not believe in wind or hydro but the growth in solar and the ability for us to develop and earn strong risk adjusted returns should enable us to grow our solar operations at a far greater pace.

As the company makes clear, it sees a bright future in solar because it's increasingly becoming the cheapest form of energy on the planet. That's leading it to continue scaling its solar platform so that it can benefit from the increasingly compelling economics of this emissions-free power source.

A powerful plan to create value

Brookfield Renewable believes it can grow its cash flow per share at an 11% to 16% annual rate over the next five years. While several factors will help power that plan, solar will play a starring role as it should become a larger cash flow contributor. Add that growth potential to Brookfield's attractive 3.4%-yielding dividend, and it could generate market-beating total returns over the coming years. That makes it a great solar stock to buy and hold.