Please ensure Javascript is enabled for purposes of website accessibility
Free Article Join Over 1 Million Premium Members And Get More In-Depth Stock Guidance and Research
By Jamal Carnette, CFA - Dec 14, 2020 at 7:37AM

Look for this beneath-the-radar company to reap big gains from a regime change.

Barring any unforeseen developments, Joseph Robinette Biden Jr. will soon be sworn in as 46th President of the United States, officially taking the oath on Jan. 20. As investors, it's understandable to take this time to properly position your portfolio in light of the apparent differences in policy between the current and future White House occupant.

A word of caution, however: It is important to note that the path to terrible investment outcomes is paved with political bias. Here's a few notable incorrect political prognostications over the last decade: President Donald Trump will ruin the stock market; President Barack Obama's signature bill will destroy the insurance industry; President George W. Bush's tax cuts and deregulation will be good for bank stocks and the overall market. On the other hand, investors would be foolish (small "f") to blindly ignore significant shifts in the legal and regulatory environment.

We're not politicos here at the Motley Fool, so to ensure I'm not personally falling into these common biases I apply a two-step approach to any political investments: 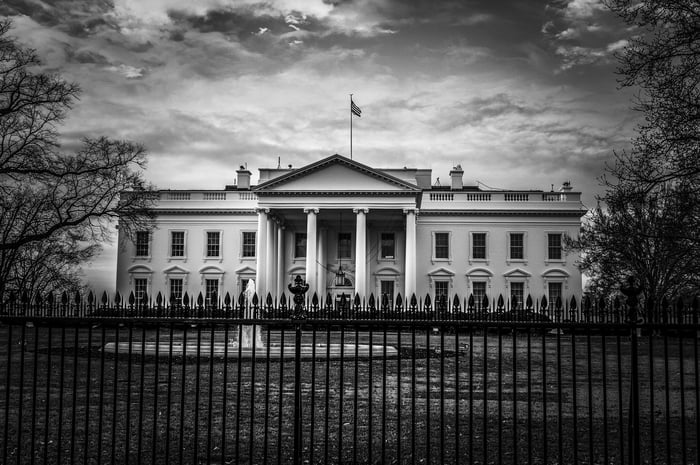 In my view, the company that fits the bill as a top stock under the Biden Administration is Axon Enterprise Inc. ( AXON -4.99% ).

Increased emphasis on video and transparency

There are two distinct, yet overlapping, long-term trends that benefit Axon, the first of which is simple human nature: Whether it be on Facebook Live, ByteDance's TikTok, or Alphabet's YouTube, humans are hard-wired for visual experiences. Another trend is the significant uptick and renewed interest in government transparency and accountability, particularly as it relates to law enforcement and community policing in the wake of George Floyd's death and the Black Lives Matter movement.

Building upon the First Step Act, which was finally signed into law by President Trump, Biden's campaign promise is to work to further address disparate sentencing outcomes. Additionally, and in a clear break from the prior administration, Biden's campaign promises to extend this into addressing disparate impacts of nationwide policing. Setting a new tone for data and video collection will directly benefit Axon as holdout states and municipalities gear up with body cameras and less lethal weaponry to comply with diktats and inducements from the federal government.

However, it is important to note the company is not resting on its laurels until Biden takes the oath. In the recently reported third quarter, Axon reported $38 million in quarterly bookings from U.S. federal customers, up 400% year over year, with a notable new deal selling digital cameras and digital evidence management systems to the U.S. Customs and Border Protection.

Although rising approximately 70% this year, with a market capitalization of $8 billion Axon remains undervalued considering the long-term opportunity. Despite the name change from TASER International to Axon Enterprise, many investors still associate the company solely with stun guns. Long-term investors might remember this was to emphasize the importance of additional services, most notably its body camera product. At that time, however, its TASER division -- devices, warranties, and cartridges -- were responsible for approximately 70% of total revenue.

In the recently reported quarter, revenue from the TASER segment fell to only 50.7% of total revenue despite growing 18% year on year as Axon's software and sensors segment, which includes body cameras, grew 39% during the same period. More importantly, the bulk of the revenue in the software and sensors segment is from Axon Evidence and cloud services, which is high-margin, SaaS-like recurring revenue akin to high-flying companies like Salesforce and Microsoft. Axon is utilizing a razor-and-blade model in this segment, taking a margin hit on the camera devices to sell cloud services.

As of the last quarter, annual recurring revenue, including cloud and device subscriptions, grew to $204 million, doubling from the 2018 corresponding quarter.

Look for Axon to continue to grow its top line at a strong clip and for the stock to rise as more understand its new business model, regardless of the occupant of 1600 Pennsylvania Ave.

Worried About the Tech Sell-Off? Consider These Safe Stocks