Canadian pot stocks Aphria (NASDAQ:APHA) and Tilray (NASDAQ:TLRY) are looking to join forces in what would be a seismic shift in the marijuana industry. On Dec. 16, both companies announced a defining agreement to merge and that the all-stock deal will close in the second quarter of next year.

Earlier this year, Aphria was also in advanced merger talks with Aurora Cannabis (NASDAQ:ACB), but that deal fell through. The Tilray-Aphria deal is much more of a sure thing at this point, with both companies already eyeing a completion date. Let's take a closer look at what this transaction could mean for the industry and if investors should be buying up either of their stocks based on this news. 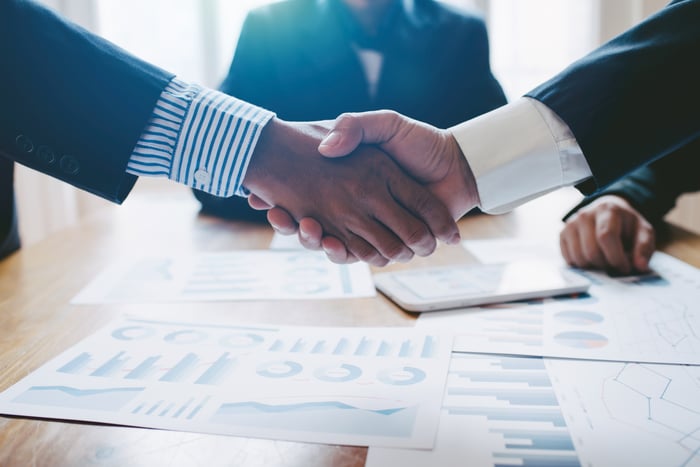 The largest cannabis company in the world -- but for how long?

Combined, the two companies say that based on pro forma revenue of 874 million Canadian dollars ($685 million), they would be the largest cannabis company in the world. But as impressive as that sounds, it may end up being short-lived. Massachusetts-based Curaleaf (OTC:CURLF) reported pro forma revenue of $215.3 million in its latest quarterly results for the period ending Sept. 30. Even if the company were to maintain that run rate throughout the course of a full year, its revenue would come in at around $860 million, well above Aphria and Tilray's combined figure. And this also doesn't factor in the growth that Curaleaf will benefit from in 2021 with four more states legalizing marijuana for recreational use.

While Aphria and Tilray would likely become the largest Canadian cannabis company in terms of sales, the title of world's largest likely wouldn't last for long, especially since neither company would have access to the lucrative U.S. pot market while marijuana remains illegal federally. Although together, the companies believe they are "well-positioned to compete in the U.S. cannabis market," the reality is that they'll be limited to just the hemp-based cannabidiol (CBD) segment for now. Analysts project that the U.S. retail CBD hemp market will be worth up to $11.3 billion by 2024, up from an estimated $1.9 billion to $2.3 billion this year. That's nowhere near the size of the total legal cannabis market in the U.S., which could be worth as much as $35 billion by 2025.

Is the combined company a better investment?

Assuming the deal goes through, the question remains whether the combined company will be a formidable investment. Year to date, shares of Tilray are down more than 40%, while Aphria's stock is up 60%, and the Horizons Marijuana Life Sciences ETF has held relatively steady, down just 1%. Which direction the new company's stock will go in will depend on how well the businesses fuse together.

Together, the companies expect to be able to generate CA$100 million worth of annual (pre-tax) cost synergies by combining. But there will also be redundancies that will come with merging and that can lead to some short-term pain as the companies battle with inefficiencies and unnecessary costs from the onset. It could take a while before the new operation is running as efficiently as it can.

And there's still a lot to do in terms of cleaning up the financials of both companies. Through the first nine months of 2020, Tilray's incurred a net loss of $268.1 million -- more than double the $102 million it lost during the same period last year. Although its losses haven't been as big, Aphria has reported a loss in three of its past four quarterly results.

It also prided itself in posting a positive adjusted EBITDA number for the sixth period in a row when it released its first-quarter results on Oct. 15, for the period ended Aug. 31. That streak could be at risk with this merger as Tilray recently posted an adjusted EBITDA loss of $1.5 million for the third quarter ended Sept. 30. The company did state its focus remained on reaching positive adjusted EBITDA by the fourth quarter.

In its latest quarterly results, Aphria's sales of CA$145.7 million were down 4% from the previous quarter. Tilray, meanwhile, reported no growth in Q3 from the prior-year period and sales were up just 2% from the second quarter. Neither company is blowing the doors off right now when it comes to sales and there's no guarantee that will change when they're operating as one unit.

Although the two companies will have greater resources at their disposal, they'll also have more issues to work through, so it's too early to tell if the net effect will be a much stronger investment when these companies join forces.

Should investors buy shares of Aphria or Tilray today?

If the deal goes through, Aphria investors will own 62% of the combined company, even though the company will continue operating under the Tilray name. And given that both companies issued press releases about this transaction, it looks likely that the merger will become a reality.

Pooling together their resources will give the merging cannabis companies a better chance of succeeding in the industry, which is particularly important in the midst of these challenging economic times. But sometimes having a larger operation can make it more difficult to manage and operate. And that's why despite the excitement surrounding this latest news, I wouldn't go out and buy shares of either company today: There is no guarantee the new business will be a whole lot better off than where the individual entities are today.