Please ensure Javascript is enabled for purposes of website accessibility
Free Article Join Over 1 Million Premium Members And Get More In-Depth Stock Guidance and Research
By Sushree Mohanty - Dec 31, 2020 at 6:58AM

This Canadian pot company might have struggled in 2020, but it's gearing up to achieve profitability in 2021.

Canopy Growth ( CGC -7.19% ) has always been an investor favorite, even though it's struggled from time to time. After a 2019 in which the cannabis industry suffered some major setbacks, Canopy tried its best to get back on track in 2020. Even though it wasn't enough to bring in profits, the company finally saw its revenue rising.

Despite having strong financial backing from Constellation Brands ( STZ -0.95% ), the company continued cost-cutting strategies to reduce operating expenses this year. Its recent impressive second-quarter fiscal 2021 results for the period ending Sept. 30 were proof of the progress Canopy has made.

Not only did it see a 77% year-over-year jump in reported revenue to 135.3 million Canadian dollars, but it also managed to reduce its selling, general, and administrative (SG&A) expenses in pursuit of positive EBITDA (or earnings before interest, tax, depreciation, and amortization). Recently, it also announced further cost-cutting measures in Canada to bring the company closer to profitability.

Here are three reasons why you should put your hard-earned money into this exciting pot stock right now, and one big risk that it carries. Before I tell you the positives, let's investigate the disadvantage of owning Canopy stock. Despite having a first-mover advantage in the medical cannabis market, Canopy Growth is still not profitable. The company first started selling cannabis oil in the fourth quarter of FY 2016.

The company stands strong on its medical cannabis business, no doubt. It saw a 72% year-over-year surge in medical cannabis revenue (Canada and international) to CA$92.2 million in the recent quarter. But Canadian revenue growth is still affected by regulatory hurdles that delay the opening of legal stores in some provinces. This causes a mismatch between demand and supply, and has helped prevent Canopy from achieving positive EBITDA.

However, the company is taking all the necessary steps to grow revenue, cut costs, and get closer to profitability.

On Dec. 9, Canopy announced it was ceasing operations at a few of its facilities in Canada. Close to 220 employees were affected as part of these changes. Management expects to achieve CA$150 million to $200 million in cost savings, taking Canopy closer to profitability. Related to these changes, the company estimates it will record total pre-tax charges of between CA$350 million and CA$400 million in the third and fourth quarters of fiscal year 2021.

Since David Klein took over the reins of the company as CEO, cost-cutting strategies have been aggressive. The fact that the CEO is running a tight ship is a good sign. In April, Canopy exited operations in South Africa and Lesotho and closed some facilities in Canada, Colombia, and New York.

That helped the company reduce its SG&A expenses in the second quarter by 19%, to CA$147 million, from the prior-year period. It helped improve the EBITDA loss from CA$150.4 million in Q2 2020 to CA$85.7 million this quarter. Peer Aurora Cannabis ( ACB -6.39% ) implemented similar cost-cutting strategies this year, but it appears the company is still far from rebounding any time soon. 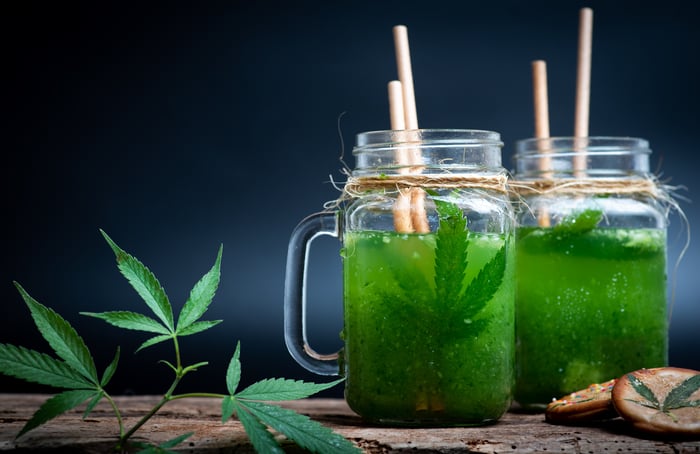 Its dominance in the cannabis beverage segment

Canada legalized derivatives in October 2019 as part of "Cannabis 2.0" legalization. The new laws allowed vapes, beverages, concentrates, edibles, and more. Canopy has launched a variety of those products since then, but one special area to applaud is its beverage segment. Canopy has shipped over 1.2 million cannabis beverages since late March, most of which are ready-to-drink tetrahydrocannabinol (THC) cannabis beverages. These were marketed under the Tweed, Houseplant, and DeepSpace brands.

According to management, the company controls 70% of Canada's market share just five brands of products. So imagine the potential when it launches more beverages and expands into the U.S. market, where it has a distribution advantage with two of its partners -- Constellation Brands and Acreage Holdings.

Canopy cannot begin the production and sale of marijuana in the country until it is federally allowed. So its acquisition deal with hemp company Acreage will be final whenever U.S. federal legalization comes to fruition. Both companies are planning to launch a wide array of beverages next summer.

Leading the beverage market, which is expected to grow by a compound annual growth rate (CAGR) of 18% to $2.8 billion by 2025, according to Grand View Research, is a huge point for Canopy. Besides Canopy, only peer HEXO has launched cannabis beverages. Aphria's recent acquisition of U.S. craft brewer SweetWater Brewing Company has marked its entry into this segment, but it could take a while before it launches any products.

Cash is king, especially in an evolving sector like marijuana. The legal status of cannabis in many countries keeps companies from expanding. Here, Canopy Growth has an advantage because of its financial partner, Constellation Brands. This U.S. beverage giant entered into a strategic partnership in October 2017 by investing CA$245 million in the business. Though the investment hasn't borne much fruit for Constellation yet, the company has faith in the cannabis industry and Canopy's potential. Constellation has been increasing its stake in Canopy since then by exercising its warrants, and it now holds a 38.6% stake. Canopy ended the second quarter with $1.7 billion in cash and short-term investments.

Constellation did most of the heavy lifting for Canopy, which saved it from being burdened with debt, unlike peer Aurora Cannabis. Furthermore, as the maker of Corona beer, Constellation's extensive network in the U.S. can help Canopy distribute its cannabis-infused beverages there.

Canopy is already dominating the Canadian beverage market, and I don't think it will be too long from now when the same happens in the U.S. Shares of Canopy have jumped 15% so far this year, while Aurora's stock has sunk 67%. The Horizons Marijuana Life Sciences ETF, the industry benchmark, has fallen 9% over the same period. 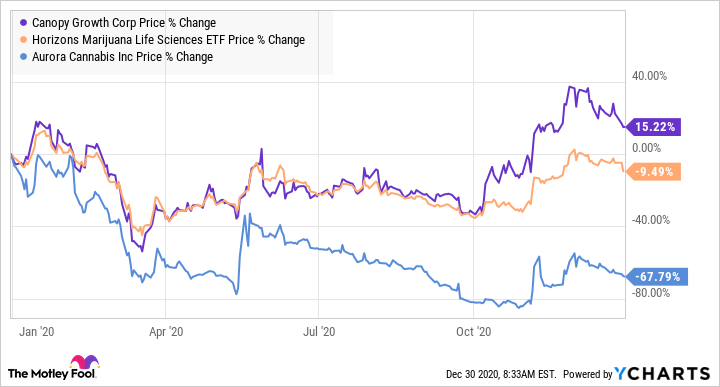 Constellation's backing, cost-cutting strategies, a strong leadership team, and focus on more innovative derivative products could take Canopy a long way next year. And federal legalization (whenever it inevitably comes) will open huge doors for Canopy in the U.S. cannabis market. I don't see much longer before this cannabis stock starts turning a profit, making it a solid buy for the long term.

Why Canopy Growth, Cronos, Hexo, Sundial, and Tilray Stocks Are Plunging This Week