Please ensure Javascript is enabled for purposes of website accessibility
Free Article Join Over 1 Million Premium Members And Get More In-Depth Stock Guidance and Research
By Scott Levine - Dec 31, 2020 at 7:33AM

This stock was supercharged last year, but should investors expect a repeat performance?

In a year that has seen impressive rises in several renewable energy stocks, the more than 1,000% rise in the stock of fuel cell supplier Plug Power ( PLUG 6.96% ) has been astonishing. And to think shareholders probably began 2020 hoping for the stock to perform similarly to the 155% gain it had in 2019.

But how about the coming year? Investors who had been watching Plug's story play out from the sidelines this year are likely wondering if it's too late to pick up shares or if the stock is headed for even greater heights in the coming months. Let's take a look at what drove the stock higher in 2020 and what investors can expect in 2021. 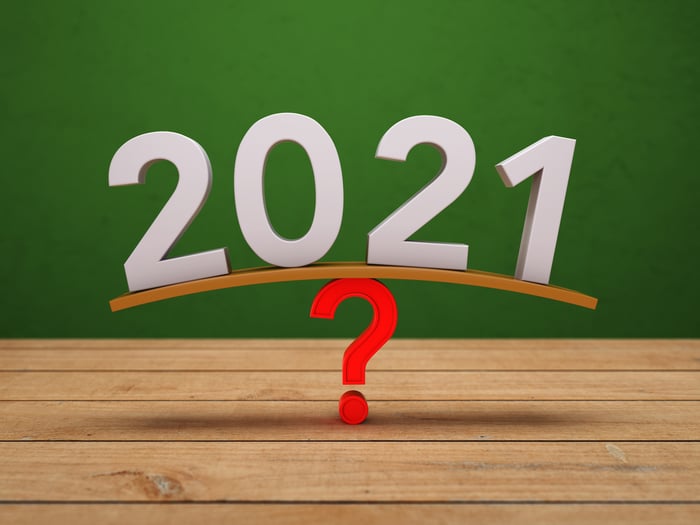 How this hydrogen hopeful stock got here

Through the first five months of 2020, Plug Power performed well for investors, climbing 33% -- especially noteworthy considering the S&P 500 dipped 6%. Shaking off the company's mediocre fourth-quarter 2019 earnings report, investors instead responded to the numerous analyst upgrades of the stock and management's reinstated confidence that the company was on track to meet its ambitious 2024 targets.

Then summer rolled in and the stock really heated up. Charged up about the company's growth prospects, investors celebrated the company's announcements regarding acquisitions of United Hydrogen Group and Giner ELX -- two deals that led management to boost its 2024 forecasts even higher. Later in the summer, the company's announcement that it had beat analysts' estimated on both the top and bottom lines for the second quarter helped to drive shares higher.

Investors' enthusiasm for Plug remained. Based on Plug announcing strong sales growth for the third quarter and confidence it would achieve its 2020 targets, plus news that the company was progressing in building out its green hydrogen network, shares raced higher in November. And there was a continued flurry of analyst upgrades.

Taking a step back and surveying the terrain

There's no denying that there are some encouraging signs regarding Plug Power's progress in 2020. The acquisitions of United Hydrogen Group and Giner ELX will surely benefit the company in the coming years, and Plug's ability to consistently convince customers of the value proposition it offers with its fuel cells (such as the recently expanded deal with Walmart) is noteworthy, considering its fuel cell peers, Ballard Power Systems and FuelCell Energy, haven't demonstrated the same prowess. 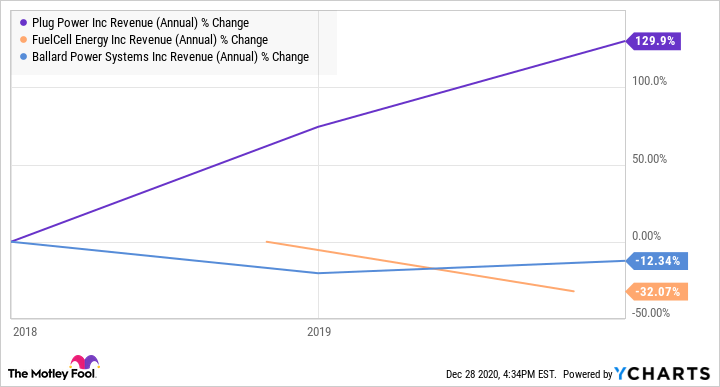 But a company's ability to grow revenue isn't enough substance for shareholders to drive the stock up more than 100-fold in one year, right? One would expect to find that 2020 was the year in which Plug finally proved that it could generate a profit from its fuel cell dealings. Alas, it wasn't the case. 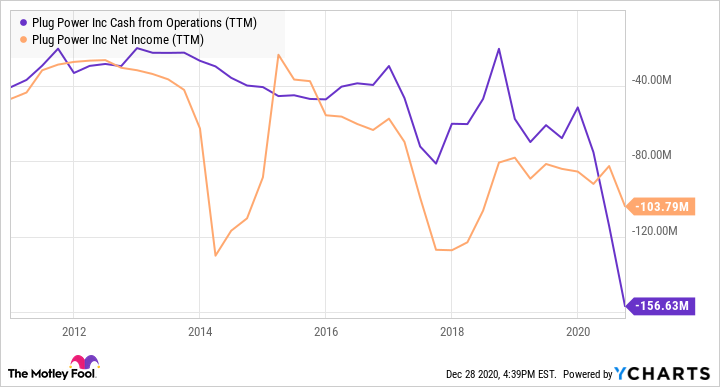 In fact, over the past 10 years, 2020 has been the year (so far -- we'll have to wait to see what the company reports for Q4) that Plug has faced the greatest challenge in generating cash from its operations. This led it to raise nearly $1 billion in capital through the issuance of 44 million new shares of stock.

But it seems like burning through cash at an unprecedented pace, reporting a red-colored bottom line, and diluting shareholders are all non-factors for those who hold fast to Plug Power's bull case.

Putting the price tag in perspective

Now that we've taken a look at the good and bad from Plug this past year, let's consider the stock's valuation. Since Plug is unprofitable and doesn't generate positive cash flow, we can't use earnings-based valuation metrics. Instead, we're left assessing the stock with the price-to-sales metric. In doing so, we find that shares are currently trading at 36.2 times sales -- pretty steep considering its five-year average multiple is 4.5, according to Morningstar, and the fact that the multiple for the S&P 500 is 2.7.

Now, I'm not averse to paying a high price for a stock; however, if I'm going to splurge on a stock that's trading at a rich valuation like Plug is currently, I'd much rather have confidence that the company is on the right trajectory toward growing cash flow and profits -- two things that are not evident with Plug at the moment.

Tread carefully before taking a position

The phenomenon related to Plug Power and its stock is remarkable. It has a cult-like following, and the bulls seem to focus on any positive developments and ignore the worrying signs. It's quite possible that shares could soar higher in 2021, but it's also possible that I could buy a scratch-off lottery ticket and win a million dollars. And that's what an investment in Plug seems to be at this point: A gamble.

Investors who find Plug Power compelling and believe that investing in it is a viable way to profit from the shift to a hydrogen economy should certainly watch to see what the company reports for the last quarter of 2020. And for those who do choose to roll the dice with the stock, be absolutely sure that you have an ample threshold for risk. For those who don't, rest assured, there are plenty of other worthy renewable energy stocks to consider.