These energy stocks appear to have some of the best prospects for the coming year.

Last year was a challenging one for the energy industry. Oil demand plunged due to the COVID-19 outbreak, which sent crude prices and oil stocks into a free fall.

However, as we turn the page to 2021, we can look at things from a fresh perspective. With that in mind, we asked our energy contributors for their top energy stock picks for the coming year. They selected oil giants Chevron ( CVX -0.63% ) and Total ( TTE -0.46% ), and clean energy producer Clearway Energy ( CWEN -0.75% )( CWEN.A ). Here's a look at why this trio topped their list of stocks to buy for the coming year.

Daniel Foelber (Chevron): Looking ahead to 2021, it's hard to think of an energy stock that's a better buy now than Chevron. Leading solar stocks are trading at sky-high valuations despite slowing growth. A beaten-down refiner like Phillips 66 that was trading at a bargain price has rocketed up over 40% in a little over a month -- which seems a little premature given its disappointing earnings. But Chevron is a stock that seems reasonable at these levels.

Chevron is a Dividend Aristocrat, having increased its annualized dividend for 32 consecutive years. At the time of this writing, it yields 6% and its shares are still down nearly 30% for the year, which is good for investors considering the stock now.

Chevron's strength is built on the rock-solid foundation that is its balance sheet. Its balance sheet leads its peers -- sporting the lowest total net long-term debt and the lowest leverage. Ballooning debt has been the downfall of oil and gas companies large and small. High debt soaks up would-be profits via interest expenses and attempts to pay down the outstanding balance. Low debt gives a company the flexibility to strike at an opportunity in tough markets. This is exactly what Chevron did when it acquired Noble Energy.

Chevron bounced back nicely in the third quarter. Its performance is still down from last year, but it's showing signs it can handle a $35 to $40 per barrel WTI oil climate. Its portfolio of low-cost, quick returns -- namely in the Permian Basin of West Texas -- position it well to benefit from an oil rebound.

On Nov. 10, news from drugmakers Pfizer and BioNTech sparked one of the largest single-day rallies of 2020. That day, WTI crude oil prices popped 8% to over $40 a barrel, but there were reasons why crude oil could continue to surge. Those predictions have largely come true as WTI is now closing in on $50 per barrel. A $50 oil price would be fantastic for Chevron, but it should do just fine at $40 as well.

Matt DiLallo (Clearway Energy): Clearway Energy had an excellent 2020. The renewable energy producer is on track to grow its cash available for distribution (CAFD) by more than 20% thanks to growth-related investments secured over the past year. Meanwhile, one of its largest customers exited bankruptcy, allowing it to reset its dividend -- Clearway increased the payout three times by 59% overall -- and free up some restricted cash. That gave it the flexibility to secure several more renewable energy investments.

Clearway Energy currently estimates that it has enough power to grow its dividend toward the upper end of its 5% to 8% annual target range in 2021. Meanwhile, it has increasing visibility on future dividend growth thanks to a string of recent agreements. Through the third quarter, the company had secured $450 million of deals, which included several projects that should start generating cash in 2021, leading it to believe it can grow its annualized CAFD to $345 million when they all come online. Meanwhile, it agreed to buy an additional interest in a large solar energy generating facility in November. It also secured a co-investment in a portfolio of renewable energy development projects in December. It's investing more than $400 million into these deals, which should generate about $40 million in annualized CAFD in the future, before financing costs. As these deals close, they'll supply a steadily growing income stream to Clearway, giving it more power to increase its dividend.

That steadily growing dividend could give Clearway the power to continue generating market-beating total returns. Meanwhile, with the renewable energy sector accelerating, it should have plenty of additional growth opportunities in the future. Because of that, Clearway looks like a great energy stock to buy for 2021 and beyond.

Reuben Gregg Brewer (Total): I wish I were smart enough to know what the future holds for the oil industry and, just as important, when that future will unfold. But I'm not and, frankly, no one is. Which is why France's Total is my energy pick for 2021.

The coronavirus downturn has resulted in a steep drop in the demand for oil and natural gas and, thus, a material decline in energy prices. At some point this too shall pass, probably later in 2021 as the impact of coronavirus vaccines starts to alter the trajectory of the pandemic. As demand for oil picks up, so too should commodity prices, benefiting oil majors like Total.

But then there's the ongoing shift away from carbon-based fuels to consider. Which is why Total, which has a fairly long history in the renewable power and electricity areas, has laid out a plan to more aggressively shift its business mix. By 2030 it wants to triple the size of its "electrons" business and increase the size of its natural gas operations by 25% to ride the longer-term clean energy transition. And management has been adamant that it can sustain the current dividend and make this shift so long as oil averages around the $40 per barrel level, which it has been doing. 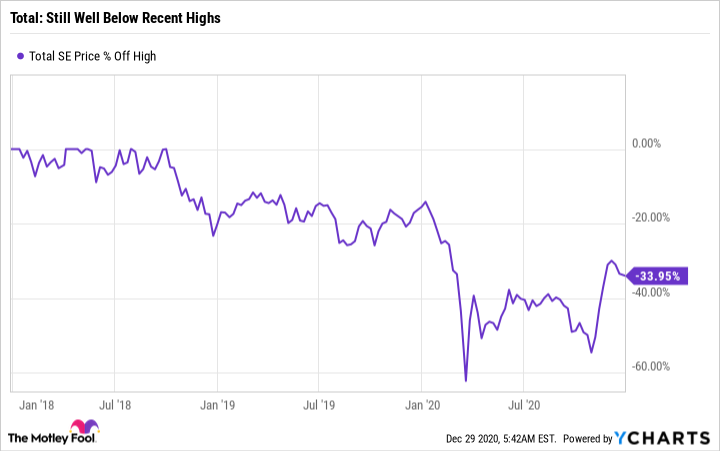 With a 7% yield and the stock still off 33% from its 2018 highs, Total is a way to play an eventual energy industry turnaround. But, at the same time, it also offers exposure to the electrification trend. That's a win-win in my book.