Many predictions for the new year probably won't pan out. However, here's one that seems to be a pretty safe bet: There will be several biotech acquisitions. Granted, this prediction is safe because there are several biotech deals made every year.

It's not nearly as easy to accurately forecast which companies will be involved in these transactions. Some biotechs appear to be prime acquisition targets, though. Here are three top biotech buyout candidates in 2021. 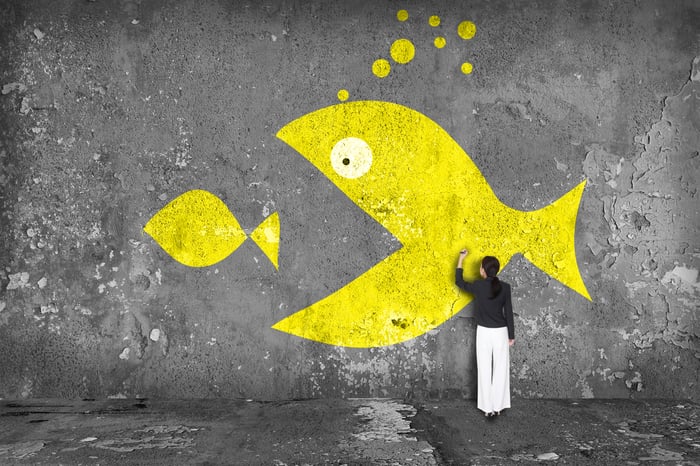 Many biotech stocks soared last year. Not bluebird bio (NASDAQ:BLUE). Its shares plunged nearly 50%. While that certainly wasn't good for Bluebird shareholders, I think it makes the company a much more attractive acquisition candidate.

It's important to understand why Bluebird wasn't able to fly high in 2020. The stock was hit hard in the overall market meltdown caused by the COVID-19 pandemic in the first quarter of the year. In May, Bluebird and its big partner, Bristol Myers Squibb (NYSE:BMY), received a Refusal to File letter from the U.S. Food and Drug Administration (FDA) for the regulatory filing seeking approval for ide-cel in treating multiple myeloma. Soon afterward, Bluebird conducted a dilution-causing stock offering. And in November, the company announced that was delaying the submission for approval of LentiGlobin as a treatment for sickle cell disease (SCD) from the second half of 2021 to late 2022.

I think that the main takeaway from this streak of bad news for Bluebird is that the biotech doesn't fully have its act together with respect to navigating the regulatory approval process. However, the potential for Bluebird's pipeline remains quite attractive. In addition to ide-cel and LentiGlobin, Bluebird has a promising late-stage candidate for treating rare metabolic disorder cerebral adrenoleukodystrophy with Lenti-D.

Because of its setbacks, Bluebird's market cap now stands at close to $3 billion. I suspect a big drugmaker (hello, Bristol Myers Squibb?) could look at this valuation along with the long-term prospects of Bluebird's pipeline and put this bird in a cage.

Cathie Woods certainly isn't alone in her view about the potential for gene editing. I wouldn't be surprised if major biopharmaceutical companies are at least contemplating making deals in the space, with Editas high on the list.

Sure, AbbVie walked away from a partnership that Allergan had made with Editas to develop gene-editing therapy EDIT-101 for treating genetic eye disorder Leber congenital amaurosis type 10. However, that was before Editas reported outstanding preclinical results in December for another CRISPR candidate, EDIT-301, in treating rare blood diseases sickle cell disease and beta thalassemia.

Editas hopes to begin an early stage clinical study of EDIT-301 in 2021. It should also make progress with its phase 1 study evaluating EDIT-101. Despite skyrocketing more than 150% last year, the biotech's market cap remains under $5 billion. I think that the promise of its pipeline combined with the strength of its CRISPR intellectual property rights could make Editas an attractive takeover candidate this year.

Thanks to the success for COVID-19 vaccines developed by Moderna and the Pfizer-BioNTech partnership, interest in messenger RNA (mRNA) technology is at an all-time high. Don't be surprised if a big drugmaker chooses to scoop up a smaller player to stake a claim in the mRNA space. Translate Bio (NASDAQ:TBIO) could be a top prospect.

Granted, Translate Bio is lagging well behind the leaders in the coronavirus vaccine race. The company and its partner, Sanofi (NASDAQ:SNY), plan to begin a phase 1/2 study of mRNA vaccine candidate MRT5500 in Q1 of this year. But the allure of mRNA goes well beyond just COVID-19.

Translate Bio's pipeline includes an mRNA therapy targeting cystic fibrosis that's in early stage testing. It also teamed up with Sanofi to develop mRNA vaccines for influenza as well as other viral and bacterial diseases.

Sanofi just might decide that it needs more than just collaboration deals with Translate Bio to remain a major player in the global vaccine market with the rise of mRNA technology. With the small biotech's market cap below $1.5 billion, an acquisition could be on the table in the not-too-distant future.