Don't put all your eggs into one platform of vaccine development.

Some are true believers in the power of sophisticated mRNA vaccines, some go for exotic viral vectors, and some are tied to the time-tested cocktail of attenuated viral particles. Whatever approach you prefer, it's clear there's likely more than one way to make a coronavirus vaccine.

At present, there's no guarantee that any given vaccine modality will perform better than another, nor is there any indication that one might be more profitable than the rest. Each vaccine technology entails a different set of risks and benefits, not to mention profound implications for the cost of manufacturing, and investors need to know how to plan their portfolios appropriately. 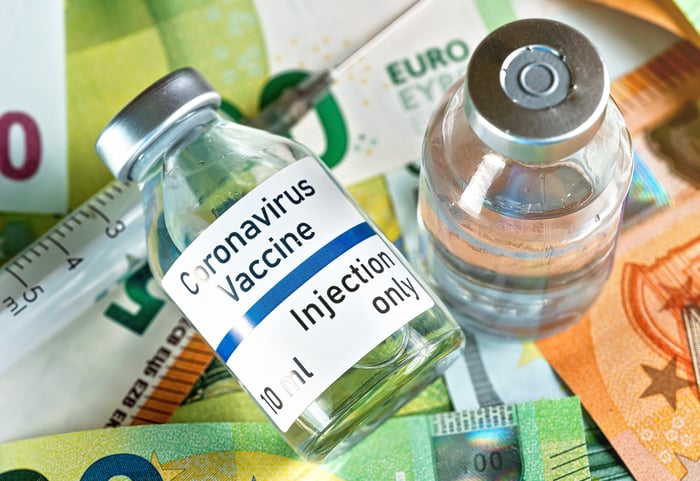 Some of the presently popular vaccine modalities have never been implemented in humans in the context of a prophylactic -- for example, the mRNA-based vaccines in development by Moderna Therapeutics, (MRNA -1.53%) Pfizer, (PFE -0.35%), and Translate Bio, (TBIO) among others. This means there will likely be more regulatory scrutiny regarding a candidate's efficacy as well as its side effects, and it also might be more difficult to combine the candidate with other technologies (like delivery systems or adjuvants) to increase its efficacy.

Furthermore, given that nobody yet manufactures mRNA-based vaccines at large scale, increasing production capacity might be more challenging than with older technologies. That said, the public might be willing to pay higher prices for a vaccine produced with a novel modality, which would help to make up for the substantial platform development costs.

Here's a list of several vaccine contenders and the approaches used by each.

Other approaches, such as Sanofi's (SNY -1.22%) viral protein vaccine, have a long history of successful immunization for diseases including hepatitis B. As a bonus, these approaches may also be less expensive to manufacture thanks to long-standing protocols that have already been refined for efficiency at scale.

Finally, using established technologies provides more opportunities for manufacturers to combine their vaccines with adjuvants, which increase the immune system's response to the inoculation, thereby reducing the number of doses required to produce immunity.

The market can react sharply and in broad and unpredictable ways after receiving results from clinical trials, especially regarding companies pursuing unproven modalities. Reports of worse-than-expected efficacy or serious side effects can raise the question of whether a company's approach is viable at all, prompting spillover losses for its peers, even if their candidate didn't experience any of the same failures.

In contrast, favorable results from one trial can lend critical scientific credibility that cascades to other companies taking the same route. Sometimes this can even counterintuitively buoy the share prices of direct competitors. These effects seem to be in play for a handful of different vaccine developers like Moderna and BioNTech, but it's unclear whether this is a temporary phenomenon or something more enduring.

Here's a look at Moderna's and BioNTech's sometimes wild ups and downs since May. 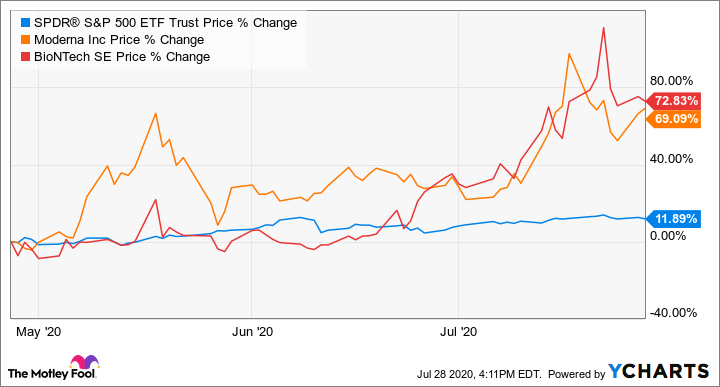 The way to address this variability is to calibrate your choice of coronavirus stocks according to different vaccine paradigms and your tolerance for risk. If you want a longer-term portfolio that's safer and detached from the hype cycle, opt for a mix of companies pursuing time-tested approaches -- like AstraZeneca or Sanofi -- and then include only a few of the most promising innovators, such as Vaxart, based on the consistency of their positive clinical trial results and movements toward commercialization. That said, this strategy is unlikely to make anyone a millionaire.

If you're a short-term growth-oriented biotech investor willing to accept a lot of risk, it may pay off to build a portfolio that's heavy on companies that all use the same unproven approach, so you'll benefit from cross-company growth based on the scientific credibility of the modality. Such a portfolio would load up on Moderna, BioNTech, and Translate Bio, but eschew somewhat safer bets like GlaxoSmithKline or Johnson & Johnson.

Alternatively, selecting a handful of different unproven approaches could minimize the chances that negative headlines will tank your stocks, while still maintaining the potential for aggressive expansion in the short and long term. Given the selection of companies described in the table above, it would mean investing in Vaxart, Moderna, Novavax, and VBI Vaccines or Inovio. This is the strategy I plan to use, as I'm comfortable with holding on to stocks that don't win the coronavirus vaccine race if their platforms show promise in other applications.