Please ensure Javascript is enabled for purposes of website accessibility
Log In Help Join The Motley Fool
Free Article Join Over 1 Million Premium Members And Get More In-Depth Stock Guidance and Research
By Harsh Chauhan - Jan 28, 2021 at 9:30AM

A couple of solid catalysts could send this tech stock to new highs.

Synaptics (SYNA 3.05%) stock has gained tremendous traction in the past six months, beating the broader market handsomely thanks to a string of impressive quarterly results that have surpassed Wall Street's expectations. 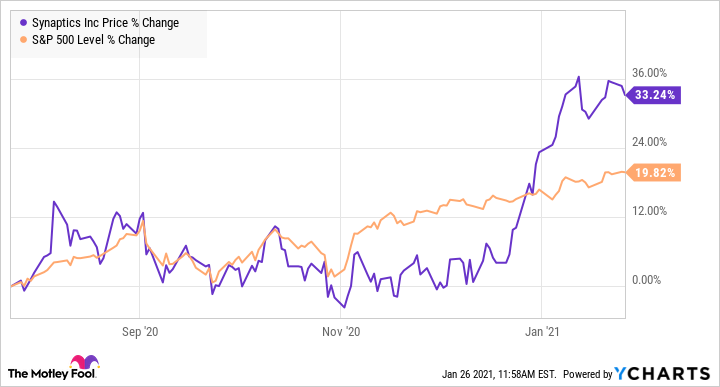 Synaptics supplies human interface solutions such as display drivers and touchscreen controllers, and it has received a nice shot in the arm from favorable trends in mobile and the Internet of Things (IoT). These markets can help Synaptics switch up a gear in 2021 and help the stock deliver more upside. Let's see how.

Synaptics' mobile business is about to have a mega year

Synaptics gets a nice chunk of its revenue from selling chips to smartphone OEMs (original equipment manufacturers). The mobile business accounted for 40% of Synaptics' total sales in the first quarter of fiscal 2021 that ended on Sept. 26, 2020, producing $131.3 million in revenue. This was lower than the prior-year period's mobile revenue of $183.5 million.

Synaptics' mobile revenue was down substantially year over year last quarter, as it had divested its mobile LCD (liquid-crystal display) TDDI (touch and display driver integration) business in December 2019. That was a smart move by Synaptics as LCD smartphones are now a dying breed, with OEMs moving toward OLED (organic light-emitting diode) displays.

According to a third-party report, OLED smartphone shipments are expected to jump to 812 million units this year from 390 million units in 2016. Only 17% of smartphones were equipped with OLED displays in 2015, but that proportion is expected to increase to 43% by 2024.

Synaptics is in a solid position to take advantage of this transition toward OLED displays. The chipmaker has scored a slew of design wins in this space, as it pointed out on the last earnings conference call in November 2020:

Apple (AAPL 0.11%) is most likely the "major handset OEM" Synaptics management is referring to, as the smartphone giant had announced its iPhone 12 lineup in October last year. The iPhone maker reportedly accounts for 21% of Synaptics' revenue. That's good news for Synaptics' mobile business, as demand for Apple's latest smartphones is very strong, which is why the iPhone maker is thinking of boosting production substantially.

Throw in the fact that Synaptics has managed to score several design wins at other key smartphone OEMs, and it is easy to see why the chipmaker's mobile business could put up a strong showing in 2021.

IoT is turning out to be a big catalyst

The IoT business accounted  for 35% of Synaptics' total revenue in the last reported quarter, producing nearly $115 million in revenue as compared to $88.4 million in the prior-year period. More specifically, Synaptics' IoT revenue jumped a whopping 30% year over year during the quarter, thanks to a couple of acquisitions and an uptick in demand.

Synaptics estimates that the IoT business could become its largest source of revenue for the quarter that ended in December 2020, producing 41% of the top line. The company estimates total revenue between $340 million and $370 million for the December quarter. So, Synaptics' IoT revenue could land around $145 million at the midpoint of the guidance range, which would be a big jump over the prior-year period's IoT revenue of $89 million.

Synaptics credits this impressive growth to the improving demand for its IoT chips that are being deployed across a variety of applications. These include smart audio systems, video interface solutions, and smart wireless connectivity solutions including security cameras, smart displays, and smart home solutions.

The good part is that the demand for IoT chips is expected to clock an annual growth rate of more than 13% through 2025. So, Synaptics' terrific IoT growth seems here to stay and complement the mobile business's potential upside.

All of this makes Synaptics a growth stock that's worth buying even after its terrific rally, especially considering its valuation. The stock sports a forward earnings multiple of just 15 as compared to a trailing price-to-earnings ratio of 32, which points toward a stronger earnings performance that could help the stock head to new highs in 2021.