Synaptics (NASDAQ:SYNA) has beaten the broader stock market handsomely over the past year thanks to its shift to a higher-margin business model, and it looks like the shares have more upside to offer given the company's latest quarterly results.

The chipmaker's fiscal 2021 first-quarter earnings jumped significantly over the prior-year period on the back of strong momentum across the PC, mobile, and the Internet of Things (IoT) businesses. Synaptics exceeded its own expectations last quarter, and claims to have a nice pipeline of design wins and new product ramps that could help it move into a higher gear in this new fiscal year.

Let's see why Synaptics could remain a top tech stock and sustain its impressive rally. 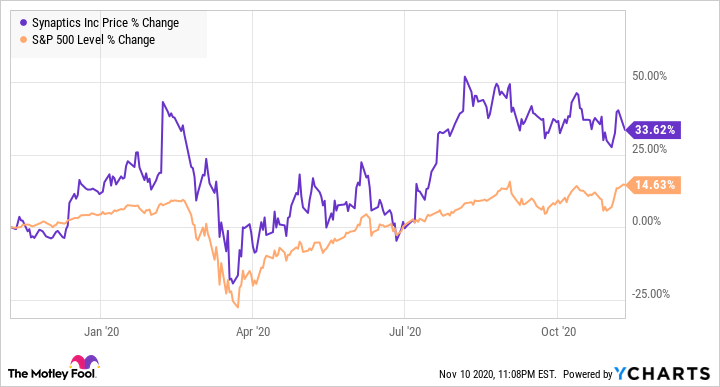 Synaptics is making the right moves

Synaptics' fiscal first-quarter revenue came in at $328.4 million, down 3% over the prior-year period but higher than the midpoint of the company's guidance range of $315 million to $335 million. The lower revenue was because Synaptics' now-divested TDDI (touch and display driver integration) business was a part of the mobile segment in the year-ago quarter.

The liquid-crystal display (LCD) TDDI business generated $131 million in revenue in the first half of fiscal 2020 (about $65 million per quarter). So investors shouldn't be worried about the company's revenue decline, as it managed to substantially improve its margin profile thanks to the divestment.

Synaptics reported non-GAAP gross margin of 49.7% in the previous quarter, a huge jump over the prior-year period's figure of 41.5% and the highest level it has seen in over seven years. The company also clocked its highest operating margin in over six years. The margin gains translated into a nice earnings bump, with Synaptics reporting adjusted earnings of $1.85 per share, compared to $1.22 per share in the year-ago quarter.

The company is expected to enjoy strong earnings growth through the new fiscal year thanks to the divestment of the TDDI business and its focus on the higher-margin organic light-emitting diode (OLED) display driver segment. Rosenblatt Securities estimates that the sale of the TDDI business could boost Synaptics' earnings by $0.45 to $0.55 per share in fiscal 2021.

Synaptics' mobile business supplied 40% of its total revenue last quarter, and it is playing a key role in driving up its margins as the smartphone market shifts from LCDs to OLEDs. The company anticipates 10 new smartphones equipped with its OLED touch controllers to hit the market in the coming months, though it may have a huge winner on its hands in the form of the new Apple (NASDAQ:AAPL) iPhone 12 models.

Synaptics management pointed out on the latest earnings conference call that:

The chipmaker reportedly gets a substantial chunk of its revenue from Apple, and its largest customer supplied 21% of the total revenue last quarter. Synaptics' mobile revenue shot up 25% year over year after adjusting for the sale of the TDDI business, and it is likely to sustain its momentum given reports that Apple is preparing to increase production and ship over 200 million units next year. The new iPhones could drive a mega upgrade cycle for Apple, and Synaptics could ride on the smartphone giant's coattails.

Looking beyond mobile, Synaptics is turning up the heat in the IoT business. The segment accounted for 35% of Synaptics' revenue last quarter, and it is expected to exceed the mobile business in size in the fiscal second quarter. The IoT business is benefiting from a broad range of growth trends in video interface solutions, audio chips, and smart homes.

With the IoT chip market expected to clock double-digit growth rates in the coming years, according to third-party estimates, it isn't surprising to see why Synaptics sees better days ahead in this business. So, investors who have been on the sidelines so far should take a closer look at Synaptics, as it has the ingredients to keep growing at a nice clip.

Finally, Synaptics trades at an attractive valuation. Its trailing price-to-earnings (P/E) ratio of 24 is way lower than the five-year average multiple of 94. Meanwhile, a forward P/E ratio of 14.6 points toward future earnings growth, which Synaptics should be able to deliver given the catalysts it is sitting on.