Please ensure Javascript is enabled for purposes of website accessibility
Log In Help Join The Motley Fool
Free Article Join Over 1 Million Premium Members And Get More In-Depth Stock Guidance and Research
By Lou Whiteman - Feb 10, 2021 at 11:53AM

The SPAC is merging with an aerospace start-up that has some big-name backers.

Shares of Atlas Crest Investment (ACIC) were up more than 27% as of 11:43 a.m. EST Wednesday after the special purpose acquisition company (SPAC) announced a merger partner. It will combine with Archer, an electric plane start-up that is also getting backing from some high-profile potential partners.

Prior to markets opening Wednesday, Archer and Atlas Crest announced their plans to combine and thus take Archer public. The overall deal is expected to provide $1.1 billion in gross proceeds to the post-merger company, including a fully committed $600 million private placement from investors including United Airlines Holdings (UAL 4.26%) and Stellantis (STLA 5.12%).

Archer is developing an electric vertical takeoff and landing (VTOL) plane that it says will be capable of flying up to four passengers up to 60 miles at speeds of up to 150 mph. United also placed an order for 200 of those aircraft in a deal valued at about $1 billion, with an option for an additional 100. 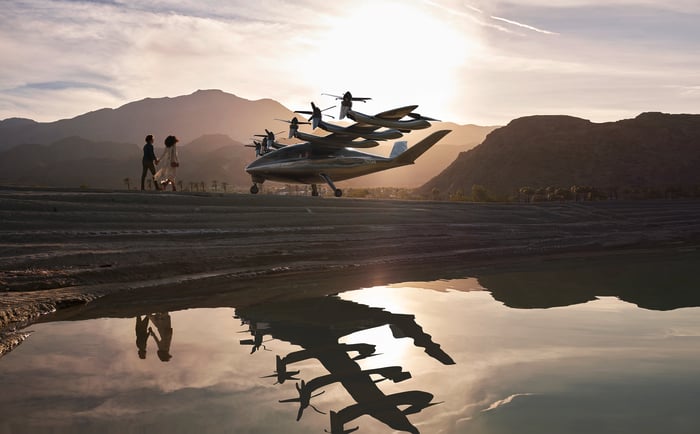 Emissions are a big concern for airlines, and one good way for the industry to reduce its carbon footprint would be to find alternative vehicles for the shorter flights in their networks. United envisions using Archer's short-hop VTOL planes to shuttle passengers to its hubs from nearby cities that are currently served by small jets.

Archer says it intends to unveil its aircraft this year.

"We founded Archer to address the environmental and societal issues caused by road transportation and urban overloading," Archer co-founder and co-CEO Adam Goldstein said in a statement. "Through our all-electric aircraft, we are striving to curb carbon emissions, decrease traffic, and create the transportation networks of the future."

Stellantis, the auto company formed last month by the merger of Fiat Chrysler and Peugeot, in January announced a partnership with Archer focused on supply-chain management and accessing composite materials.

This is an exciting business, but it is important to note that it is still in an early stage. And while Archer is seeking to address a real need for airlines, it's not the only company working this angle. Airbus, for example, is also developing a zero-emissions aircraft intended to replace jets on short flights.

The deal values Archer at about $3.8 billion, which means a lot of growth potential is already priced in. The price jump Atlas Crest's shares took on Wednesday only adds to that forward-looking valuation.

Assuming all goes to plan and the deal closes as expected, the stock ticker will change to ACHR sometime relatively soon. This is a business well worth watching closely, but given its high valuation and the risks attached to an early-stage company that still needs to get its plane airborne and approved by regulators, I'd advise against rushing to buy into Atlas Crest right now.