Please ensure Javascript is enabled for purposes of website accessibility
Log In Help Join The Motley Fool
Free Article Join Over 1 Million Premium Members And Get More In-Depth Stock Guidance and Research
By Lou Whiteman - Feb 12, 2021 at 7:32AM

Boeing does get a glimmer of good news for its 777X program.

Singapore Airlines (SINGY -0.03%) will defer S$4 billion ($3 billion) in aircraft purchases and other capital expenditures, a fresh indication of the lasting impact the COVID-19 pandemic will have on airlines and the aerospace manufacturers that rely on them.

The decision will reshuffle the order books of Boeing (BA 1.33%) and Airbus (EADSY 1.44%), and shows why it is dangerous for investors to count on airplane order backlogs to judge the near-term health of these businesses. Until recently, Singapore had been among the world's fastest growing airlines, and a key customer for larger, international-focused planes.

But Singapore, like most airlines, is now retrenching, and doesn't see demand returning any time soon.

The airline is only deferring orders, for the most part, and not cancelling, though it does intend to convert 14 of its Boeing 787 Dreamliners on order to 11 orders for the 777-9, part of Boeing's 777X family. 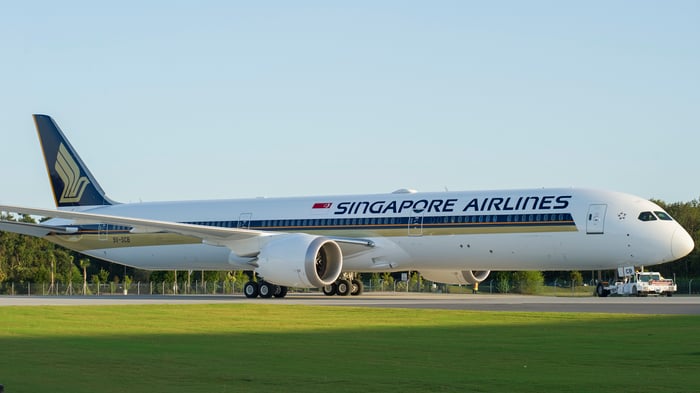 Airlines have seen global travel demand plummet due to the pandemic, and carriers like Singapore who lack a robust domestic market have been hit particularly hard. While U.S. airlines expect demand for domestic leisure travel to accelerate by mid-2021, international travel could take until the second half of the decade to return.

"The agreements with Airbus and Boeing are a key plank of our strategy to navigate the disruptions caused by the Covid-19 pandemic," Singapore Airlines CEO Goh Choon Phong said in a statement. "They allow us to defer capital expenditure and recalibrate the rate at which we add capacity, aligning both with the projected recovery trajectory for international air travel."

The news isn't all bad for Boeing. While Singapore is reducing its total number of planes on order, the adjustment does provide a much-needed boost for the manufacturer's struggling 777X program.

The new version of the 777, one of the largest aircraft in Boeing's commercial portfolio, has been plagued by development delays. Boeing had originally hoped to have the plane in service by now, but in January said it would be 2023 at the earliest before the plane is certified and deliveries begin.

Boeing is selling the plane into a difficult market, as airlines are more focused right now on smaller, more cost-efficient aircraft. The delayed timeline allows some customers the option of opting out of their orders, and Boeing in its annual report said as much as one-third of the 309-plane 777X order book could be at risk for cancellation.

The added 777 airframes to Singapore will do a small part to stabilize that line. But they come at the expense of the Dreamliner, which Boeing is consolidating from two production lines to one due to falling demand. By converting, and not cancelling, Singapore is also signaling its confidence that demand for long-haul international fights will rebound eventually.

As shares of Boeing plunged nearly 75% during the pandemic, the bull case for buying in was built around the company's impressive 4,000-plus commercial order backlog worth more than $300 billion at list prices. There's some merit to that argument, but Singapore's decision to defer provides a valuable lesson about why it is dangerous to read too much into the order book. 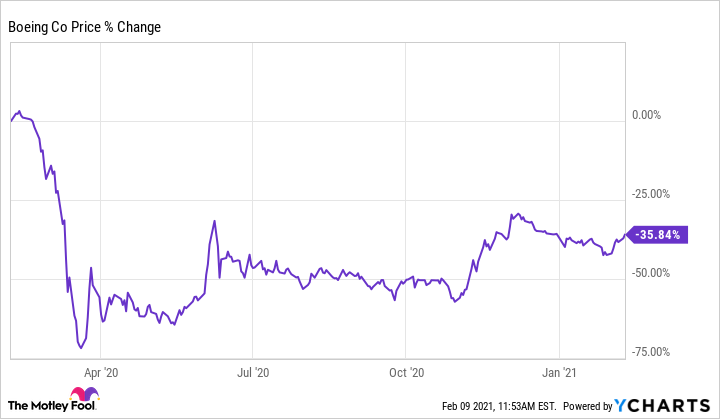 During the last industry downturn, from 2001 through 2003, Boeing saw a reduction in its backlog of only 500 planes, according to data from aerospace consultancy Teal Group. Much of that reduction was accounted for by deliveries, with only 80 cancellations recorded during a two-year period. Yet Boeing was forced to cut production rates by 30%.

The reason was deferrals: Airlines held on to their orders, but made arrangements with the manufacturer to delay delivery.

A similar scenario is playing out this time around. For investors, that means that while the long-term growth story remains intact, there might be relatively little revenue coming in from new plane sales in the next few years.

For Boeing, which has seen its total debt balloon from about $15 billion a few years ago to more than $60 billion today, there are no quick, easy ways to spark sales or accelerate free cash flow. For now, the best the industry and its investors can hope for are deals that rework the order book instead of cancellations.