Please ensure Javascript is enabled for purposes of website accessibility
Log In Help Join The Motley Fool
Free Article Join Over 1 Million Premium Members And Get More In-Depth Stock Guidance and Research
By Lou Whiteman - Feb 2, 2021 at 8:52AM

The company's backlog takes a hit in a regulatory filing.

Boeing's (BA 2.79%) decision to further delay the debut of its 777X widebody jet puts a significant portion of the jet's order book at risk, highlighting the dangers the aerospace giant still faces even as the pandemic recedes.

The 777X was supposed to be in service by now, but Boeing delayed its debut, initially until 2022 and more recently until late 2023. The company is still reeling from the 20-month grounding of another of its aircraft, the 737 MAX, after a pair of fatal accidents. The 777X delays are due, in part, to greater regulatory scrutiny over the new plane certification process. 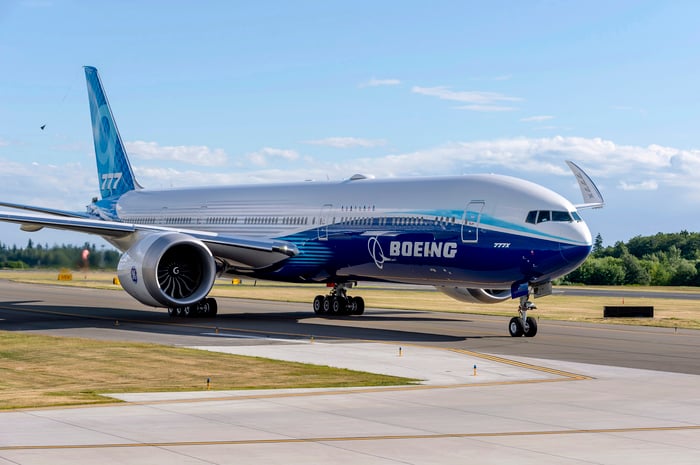 The delays could take their toll. In its annual form 10-K filed Monday, Boeing reduced the number of firm 777X orders to 191. That's 38% below the number of orders the company lists on its web site.

Boeing told Bloomberg, which first reported the reduction, that the drop is due to an accounting standard that requires the company to remove sales that are at risk of falling through. With the plane now delayed until 2023, some customers have the right to walk away from their sales contracts.

Boeing has invested billions in the development of the 777X, taking a charge of $6.5 billion in the fourth quarter related to delays in the program. However, it is facing a difficult sales environment for the plane. The pandemic has caused airlines to scale back their fleets, and with international travel expected to recover later than domestic flying, there is not a lot of demand for large, ocean-spanning jets like the 777X.

It is not certain that any customer will exercise their option to walk away, but customers are at least considering it. Emirates, the Middle Eastern airline that accounts for about one-third of the 777X order book, has said it could swap some of its orders with smaller 787 Dreamliners.