A much-maligned part of the market may have its day in 2021.

Since the last financial crisis in 2008, banks haven't been terrific investments. Many got severely hurt in the 2008 real estate bust and ensuing fallout. Even in the recovery, the subsequent decade of restrictive (albeit deserved) regulations, higher capital requirements, and a slow economic recovery soured investors on the sector. Compare the Financial Select Sector SPDR ETF (XLF -0.88%) to the overall market and the tech-heavy QQQ Trust (QQQ -1.24%), which tracks the Nasdaq 100. 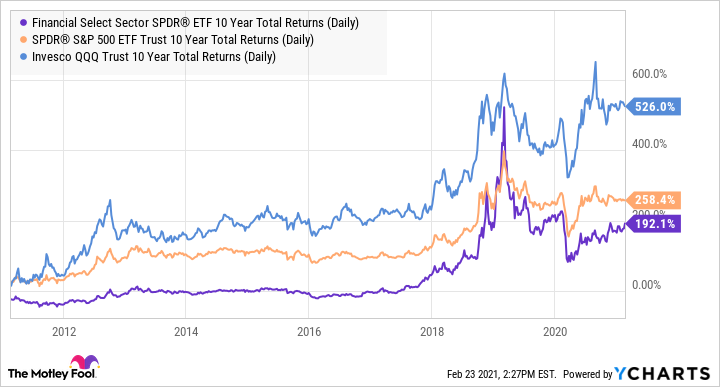 But after 12 years of general underperformance, could now be the financial sector's time to shine? Here are three reasons investors may wish to bulk up their allocation to banks, payments companies, and insurance companies for 2021 and beyond. 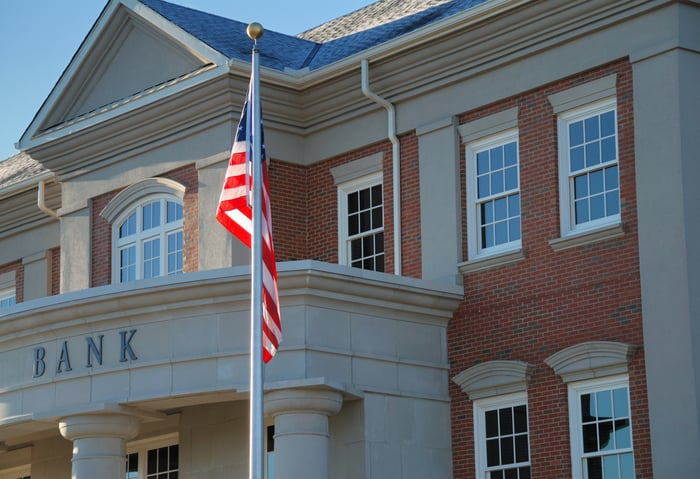 Bank stocks and financials could be poised for upside in 2021. Image source: Getty Images.

No. 1: Higher economic growth ahead

When the economy does well, so do bank stocks. More economic growth means customers can pay their mortgages and other debts. Economic expansion also creates demand for credit. Banks, brokers, and payments companies also have many fee-earning businesses based on transactions, which thrive in a "roaring" economy.

Many think the economy will roar back to life in 2021. Indeed, banks are in better shape compared to the deep debt overhang of the Great Financial Crisis. Consumers are also less indebted today. In fact, credit scores in aggregate miraculously went up last year. Amid the pandemic, customers haven't been able to spend much while in quarantine; those who have managed to keep their jobs have very healthy balance sheets with cash to spend.

As the economy reopens, look for consumers with huge pent-up demand. Banks should have the means to lend to them. On top of that, we will likely soon get the $1.9 trillion American Rescue Plan passed, which will also help those less fortunate get through the final stages of the pandemic. That could contribute to a broader recovery, even for those in service jobs who are temporarily out of work.

Most U.S. banks have a mix of mortgage lending, corporate lending, credit cards, wealth management, investment banking, and sales and trading products. The high volatility of 2020, as well as a deluge of new IPOs and SPACs later in the year, helped keep large banks afloat last year. Now, those concentrating on payments and traditional lending may do quite well in 2021, due to the factors below.

Higher economic growth may finally push longer-term yields higher after decades of consistently moving lower. Sure, the pandemic pushed the 10-year Treasury rate back toward zero, but as you can see, long-term rates were already on a long, multidecade downtrend. Prior to the financial crisis of 2008, the 10-year yield was around 5% before bottoming out around 0.6% last year.

There are many reasons for the long-term declines in interest rates, including demographic headwinds, a slow recovery coming out of 2008, and technology capping inflation. However, with a more hefty stimulus likely coming soon (as compared with 2009's $800 billion stimulus), as well as the unique nature of this pandemic downturn, it appears people may think interest rates could rise again as the economy "roars" back to life.

The Federal Reserve has pledged to keep short-term interest rates low for the foreseeable future to assure the recovery, even if the economy runs "hot" for a bit of time. Should long-term rates bounce higher, big banks would see a steepening yield curve, which is the difference between short-term rates and long-term rates. Since banks borrow "short-term" with deposits, CDs, and other instruments, and lend "long-term," banks would make higher net interest margins with a steep yield curve, leading to bigger profits.

Many years of low long-term rates and a generally flat yield curve have capped banks' earnings power, but if the economy heats up in a way we haven't seen over the past decade, that could change coming out of 2021.

Higher interest rates also affect stock valuations generally. In the recent past, growth stocks have generally dominated value stocks due to a narrowing of the time value of money.

Over the past decade, disruptive tech stocks, which have high revenue growth but usually little or no profits, have absolutely soared amid the low-interest rate environment, on the promise of earnings very far down the road. In contrast, banks have generally had profitable years, but lower growth, and have seen their valuations beaten-down amid the low interest rate environment, often trading at high single-digit to low double-digit P/E ratios over the past decade.

If economic growth picks up and interest rates rise, not only should banks' earnings pick up, but value stocks could also benefit, as a higher rate environment could cause investors to sell low or no-profit growth stocks and buy lower-priced value stocks that make good profits today.

A higher-growth economy, higher interest rates, and a rotation to value stocks are a trifecta of factors that could greatly benefit financial stocks in 2021. While nothing is ever assured in the stock market, we have already seen this rotation begin somewhat this week. Personally, I think the trend has a good chance of continuing as the population gets vaccinated and the economy reopens this summer.

Wells Fargo Is One of the Most Popular Bank Stocks on Robinhood. Should It Be?

Here's Why Wells Fargo, JPMorgan Chase, and Other Big Banks Are Soaring on Wednesday