Please ensure Javascript is enabled for purposes of website accessibility
Log In Help Join The Motley Fool
Free Article Join Over 1 Million Premium Members And Get More In-Depth Stock Guidance and Research
By Matthew Frankel, CFP® – Jul 22, 2020 at 6:53AM

The bank has been one of the worst performers in the financial sector, but is it a good long-term opportunity?

Wells Fargo (WFC -0.99%) has been one of the worst-performing stocks in the financial sector. Not only has the COVID-19 pandemic hit Wells Fargo harder than its peers, but the bank's infamous "fake accounts" scandal and numerous other issues in recent years have caused the bank to underperform even beforehand. Since 2016, Wells Fargo's total return has been -46%, far below the 36% total return of the Financial Select Sector ETF (XLF -1.58%) during the same period and dramatically lower than the 74% total return of the S&P 500.

Despite the poor performance, Wells Fargo is one of the most popular bank stocks among investors on the Robinhood stock trading platform. Nearly 98,000 Robinhood clients own shares of Wells Fargo – even more than larger rival JPMorgan Chase (NYSE: JPM). So, let's take a look at the reasons investors might want to buy Wells Fargo, the major risks and issues investors should know about, and whether it could be a smart long-term investment at the current level.

First, let's take a look at the reasons you might want to consider Wells Fargo for your portfolio.

For one thing, the stock looks extremely cheap. It trades for just 65% of its book value, which is nearly as low as it ever reached during the 2008-09 financial crisis when it looked like the banking system was on the verge of collapse. Over the past decade, Wells Fargo has spent most of its time at a valuation between 120% and 160% of book, even after the fake accounts scandal and other bad behaviors were revealed. 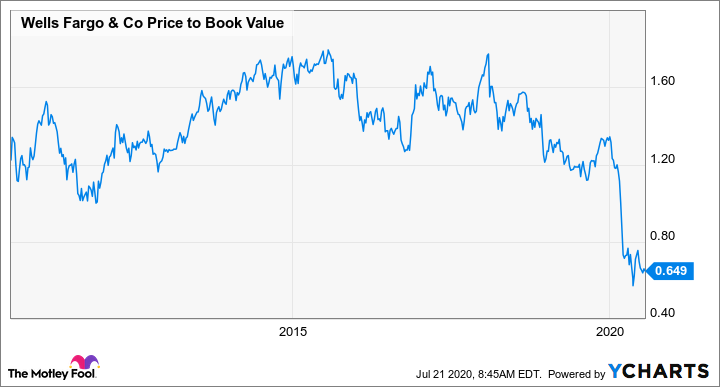 Additionally, Wells Fargo has generally high asset quality and is a profitable financial institution. The only reason it posted a loss in the second quarter of 2020 is because the bank set aside $8.4 billion to cover anticipated COVID-19 related credit losses -- excluding that, the bank would have posted a $6 billion profit, which is barely lower than its second quarter 2019 net income.

And, the bank is well capitalized, with main liquidity and capital ratios meeting or exceeding regulatory thresholds, so there's no reason to believe that Wells Fargo could run into serious financial trouble even if the recession is far worse than expected.

But, it's cheap for a reason

Having said all that, it's important for investors to realize that for the time being at least, Wells Fargo is cheap for a reason. Here are just a few of the key points investors should keep in mind before investing:

Wells Fargo is almost exclusively focused on commercial banking. Investment banking tends to perform well during turbulent times, and this is helping rivals who have large trading and underwriting operations. Wells Fargo doesn't have this tailwind to offset the negative effects of the pandemic.

There's tremendous uncertainty surrounding the pandemic and the U.S. recession. If the economy can remain open, employment can recover, and Congress can agree on a new stimulus package, the effects on banks could be relatively small. On the other hand, if government support largely runs out and unemployment stays high, it could lead to a wave of loan defaults. Wells Fargo now has more than $20 billion set aside to cover credit losses. This may sound like a huge amount of money (and it is), but keep in mind that Wells Fargo has a $971 billion loan portfolio, so if the economy gets really bad, it might not be enough.

Finally, Wells Fargo's fake accounts scandal and other issues of the past few years are still affecting the business. While new CEO Charlie Scharf is making smart moves to get the bank past all of its recent drama, I wouldn't exactly say that it's in the rearview mirror just yet.

The bottom line is that despite its short-term headwinds, Wells Fargo could be a smart choice for patient long-term investors. Just be aware that there are considerable risks involved with the stock, and it's likely to be a turbulent ride until the economic effects of the COVID-19 pandemic become more clear.