Please ensure Javascript is enabled for purposes of website accessibility
Log In Help Join The Motley Fool
Free Article Join Over 1 Million Premium Members And Get More In-Depth Stock Guidance and Research
By Selena Maranjian - Feb 27, 2021 at 5:05AM

The new president has a lot of work to do, and many companies are likely to benefit from some of his priorities.

There's a brand-new administration in Washington with new priorities and different goals than the previous administration. Since some companies will tend to fare better under one administration than another, it's fair to wonder which businesses are likely to prosper under the Biden administration and its policies.

Here are three companies that seem to have promising futures. 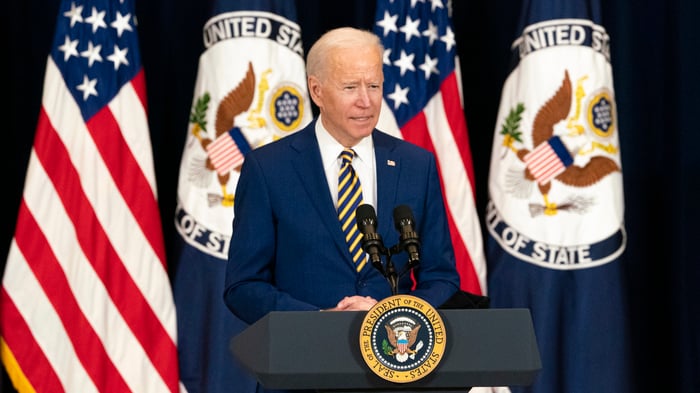 There's been much outcry in recent years about whether and how to reform policing in America. President Biden is in favor of police reform, too, and has a good relationship with police.

A Washington Post article noted that, "Even officials who supported Trump in the election said that they thought the president-elect was well-suited to bring together groups that are divided on police issues." In a June op-ed in USA Today, President Biden said, "Every single police department should have the money it needs to institute real reforms like adopting a national use of force standard, buying body cameras and recruiting more diverse police officers."

One company that may see a boom in business due to police reform is Axon Enterprise (AXON 0.83%). You may have known it by its former name, Taser International. It specializes in taser weapons, body cameras for police, and software that can help police departments store and share information such as video from cameras, digital evidence, and more.

Axon is not a secret, though, and its stock popped 34% in January alone. It may not be a screaming bargain right now, but it's likely to grow over the long term. Its market value of roughly $10 billion suggests more room to grow, as well. One estimate sees the public-safety market growing to nearly $40 billion by 2024.

For best results, you might wait for a pullback in the stock's price or perhaps just buy some of the shares you'd like to own.

Those in both parties acknowledge that there's much work to be done on the country's infrastructure, though there's disagreement over how much to spend on it. President Biden campaigned with a plan that would cost more than $2 trillion. It focused on roads and bridges, along with addressing climate-related issues and broadening broadband access. Even a $1 trillion plan would mean a lot of money flowing to companies in the building and infrastructure arenas -- companies such as CSX (CSX 0.00%).

With a market value recently near $70 billion and a dividend recently yielding 1.2%, CSX is a major transportation company involved in moving things via railroad and intermodal means -- chiefly in the eastern United States. CSX has links to more than 230 short-line railroads and more than 70 water ports.

Clearly, when work is done on East Coast infrastructure, CSX is likely to be moving many tons of materials and supplies to support that work. As management noted in its most recent conference call, it's committed to increasing the company's efficiency and also rewarding shareholders.

Then there's Becton, Dickinson (BDX 0.46%), which is perhaps the most obvious kind of company likely to benefit during the Biden years -- a healthcare company. It specializes in medical diagnostics and therapeutics, and plenty of supplies for labs and healthcare workers, as well -- and the COVID-19 pandemic has generated a lot of orders, such as for needles and syringes.

The company announced in late 2020 that it had received orders for more than a billion injection devices. That's great, and there's likely much more to come, since the main vaccines at the moment require two doses and there's talk that a third dose may be recommended at some point in order to address virus variants. In addition to that, the company is collaborating on a rapid at-home test for the virus. And COVID-19 virus vaccinations may even become an annual event.

All that is on top of Becton, Dickinson's regular business. In its most recent quarter, revenue was up more than 25% year over year, while net income more than tripled. Management upped its projections for revenue growth in the current year to between 10% and 12% on a currency-neutral basis.

These are just some of many companies likely to benefit from the priorities that the Biden administration has put forward. Plenty of other healthcare, infrastructure, and security businesses also have promising futures, as do companies in other realms, perhaps such as those addressing education and the environment.