At long last, the bank might finally be moving out of the penalty box.

Warren Buffett's Berkshire Hathaway sold off some of its stake in Wells Fargo (WFC -0.34%) in February, but that wasn't enough to derail the bank stock for the month.

Shares of Wells Fargo were up 21.1% in February, according to data provided by S&P Global Market Intelligence, as the bank reportedly hit a key milestone in its recovery.

Wells Fargo has been in the regulatory penalty box for a few years now, the result of a series of scandals dating back to the mid-2010s involving the creation of millions of fraudulent saving and checking accounts. The bank is currently prohibited by the Federal Reserve from growing larger than its asset size at the end of 2017. That could soon be coming to an end. Reports surfaced mid-month that the Fed will accept a Wells Fargo plan to overhaul its governance practices, a key step in its effort to remove the growth penalty and other restrictions currently in place.

Banks also benefited in the month from talk of higher interest rates brought on by planned pandemic-aid spending and a hoped-for economic recovery in the months to come as vaccines are rolled out.

It's worth noting that the penalty is not going away immediately. Assuming the Fed does sign off on Wells Fargo's plan, the bank will still need to implement it to the satisfaction of regulators before it gets the all-clear signal. 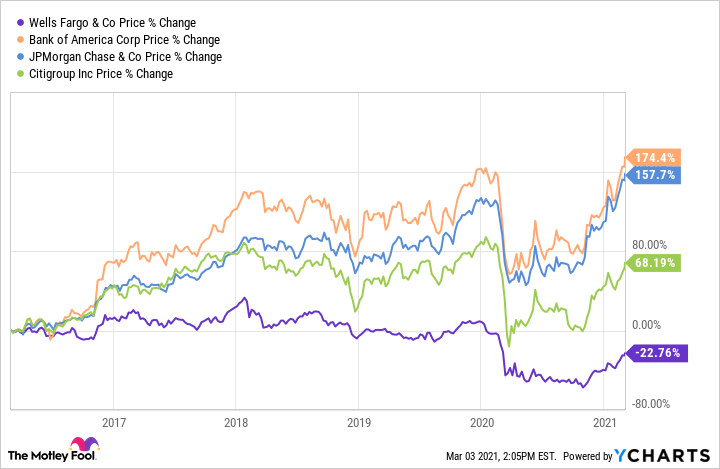 But the asset cap has been an anchor weighing on Well Fargo, a big part of the reason the bank has been an underperformer compared to its peers in recent years. At long last, conditions might be turning favorable for Wells Fargo, and the stock reacted accordingly in February.