Please ensure Javascript is enabled for purposes of website accessibility
Log In Help Join The Motley Fool
Free Article Join Over 1 Million Premium Members And Get More In-Depth Stock Guidance and Research
By Daniel Foelber - Mar 6, 2021 at 8:41AM

Only two months in, and 2021 is shaping up to be quite a different year from 2020. The market's best-performing sectors have so far been energy, financials, communications, and industrials -- compared to the tech and consumer discretionary sectors that led 2020.

Dividends provide a level of calm and consistency for investors worried about the next market crash. Guaranteed income no matter what the economy is doing or how the COVID-19 vaccine distribution is progressing can be a great way to grow your wealth over time and sleep easy at night.

Cleaning conglomerate Clorox (CLX 3.03%) and international construction and energy leader Caterpillar (CAT 1.76%) are two dividend stocks that investors are sure to love. Here's why. 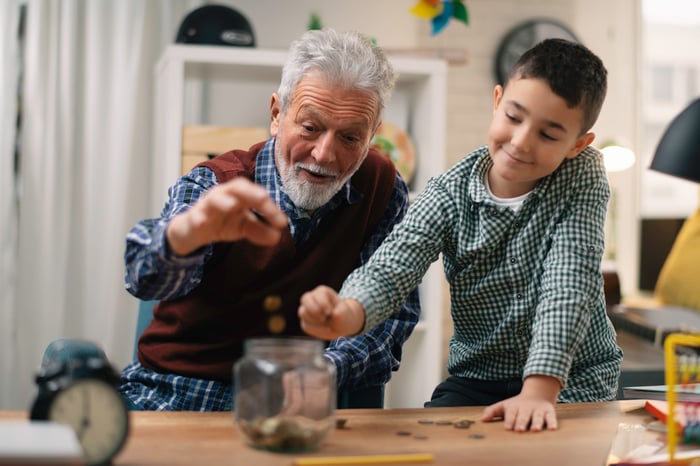 A household name that just had its best year ever

After a record fiscal year 2020 (FY20), Clorox began FY21 with a strong start. First-quarter FY21 (which corresponds to the third quarter of the 2020 calendar year) had the highest diluted earnings per share (EPS) in company history. Clorox followed that performance with an impressive second-quarter FY21, posting 27% revenue growth and a 39% increase in diluted EPS. The company also updated its full-year FY21 diluted EPS guidance to $8.05 to $8.25, which would be a 9% to 12% increase from FY20.

This rise sounds great on paper, but Clorox is about to run into some incredibly difficult comps. And the guidance suggests it's going to fall short of the spike it saw in the first half of 2020. The pandemic heavily benefited Clorox's earnings, though, so the company shouldn't be punished just because its 2021 numbers are unlikely to keep up with last year's results.

Shares of Clorox are down over 18% in the last six months, compared to a 15% gain in the S&P 500. Instead of getting caught up in these skewed comparisons, investors may find it better to compare Clorox's 2021 numbers to 2019. Clorox holds the number one or number two position in several of its key markets, many of which grew substantially in 2020. The main thing to watch will be the company's ability to retain some of the business it added from the pandemic and lean into permanent shifts toward cleanliness.

In the meantime, Clorox will likely continue raising its dividend and buying back stock. The company plans on returning $1 billion to shareholders, up from $780 million last year. It currently pays about $140 million a quarter in dividends, meaning investors can expect about $440 million in stock buybacks. Clorox is a Dividend Aristocrat, having increased its annual dividend for over 40 consecutive years. Given the consistency and strength of Clorox's performance, the company offers one of the most reliable dividends on the market today.

An industrial behemoth that is positioned for a breakout

Unlike Clorox, Caterpillar didn't have a strong 2020 performance. In fact, it was far from it. Caterpillar's top and bottom lines collapsed to their lowest levels in three years as a global economic downturn weighed on its cyclical business lines. 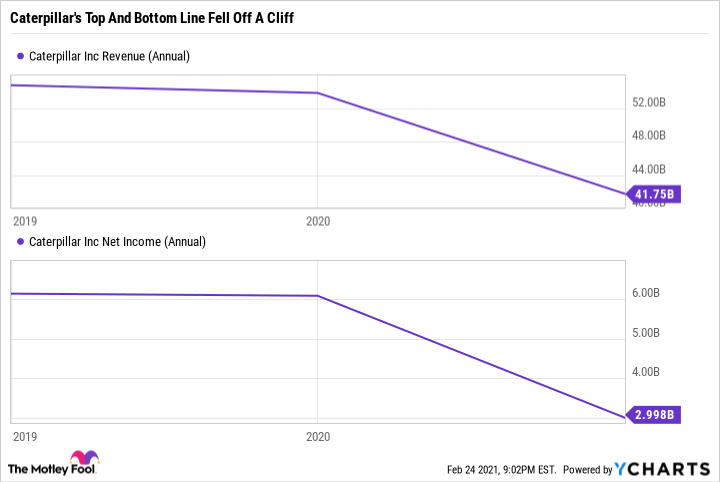 Despite this challenge, the company was able to generate $3.1 billion in machinery, energy, and transportation (ME&T) free cash flow (FCF). This was enough to cover its $2.2 billion dividend payment. It's worth mentioning that $1.7 billion in ME&T FCF came in the fourth quarter as Caterpillar's business improved toward the end of the year.

Caterpillar had originally guided for 2020 FCF of $4 billion to $8 billion. While it missed its target, it expects it can hit that goal in 2021 as the economy improves and its business returns to growth.

Much of its FCF will likely be returned to shareholders in the form of dividends and share buybacks. CEO Jim Umpleby reinforced the company's commitment to growing shareholder value, saying Caterpillar "remain[s] focused on returning substantially all ME&T free cash to shareholders through the cycles." During its first-quarter 2020 conference call, Caterpillar announced it was suspending its share buyback program. However, the company mentioned it could reinstate share repurchases sometime this year.

Heightened anticipation for rebounding performance has led to a surge in Caterpillar's stock price. Shares are likely to remain volatile, as Caterpillar has yet to prove if this growth cycle is the real deal. However, there's a very good chance Caterpillar will raise its dividend for the 28th consecutive year, and potentially buy back shares as well. Investors are likely to love the fact that the company has raised its dividend in good times and bad, making it one of the rare cyclical Dividend Aristocrats.

Reliability at its finest

The stock market can be confusing when Clorox posts its best year ever and underperforms the market, while Caterpillar has one of its worst years in recent memory yet handily beats the market. Yet this phenomenon perfectly illustrates how the market tends to be forward-looking, effectively downplaying what it considers to be short-term effects that skew earnings up or down. 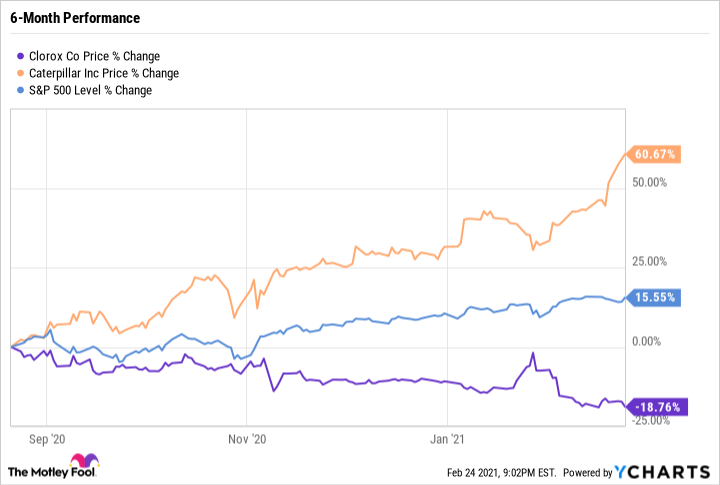 Clorox and Caterpillar are two stocks dividend investors will love, but for different reasons. Clorox's record performance and discounted stock price make it a great value now. The company isn't used to posting jaw-dropping results, and that's perfectly fine. As a consumer staple stock, its earnings are insulated from recessions, unlike the majority of the market. This resilience makes its dividend about as reliable as you can get.

On the other hand, Caterpillar's performance is heavily dependent on market cycles, but it has laid the groundwork for a big multi-year uptrend. Its ability to raise its dividend throughout varying business climates adds a level of consistency to its otherwise inconsistent performance, which can vary drastically from year to year. Clorox and Caterpillar yield 2.4% and 1.9%, respectively, which is above the current market average of 1.45%.