Please ensure Javascript is enabled for purposes of website accessibility
Log In Help Join The Motley Fool
Free Article Join Over 1 Million Premium Members And Get More In-Depth Stock Guidance and Research
By Harsh Chauhan - Mar 13, 2021 at 8:15AM

These tech stocks have become cheaper of late, but they have the potential to zoom higher.

Tech stocks were in resurgent mode on Tuesday after a run of sell-offs that saw the Nasdaq Composite index fall by more than 10% from its peak and drop into negative territory for the year. The Nasdaq's 3.7% gain on Tuesday was its best single-day showing since November, as investors picked up shares of some technology names that had taken a beating in recent weeks.

Twilio (TWLO 4.31%) and Advanced Micro Devices (AMD 0.41%) were both dragged downward in the broader market sell-off, but they popped big time on Tuesday. Shares of Twilio shot up by more than 13%, while AMD joined the party with a 6%-plus gain. It's a reminder that savvy investors with an eye for great businesses can win big in the long run by buying solid companies during short-term dips. 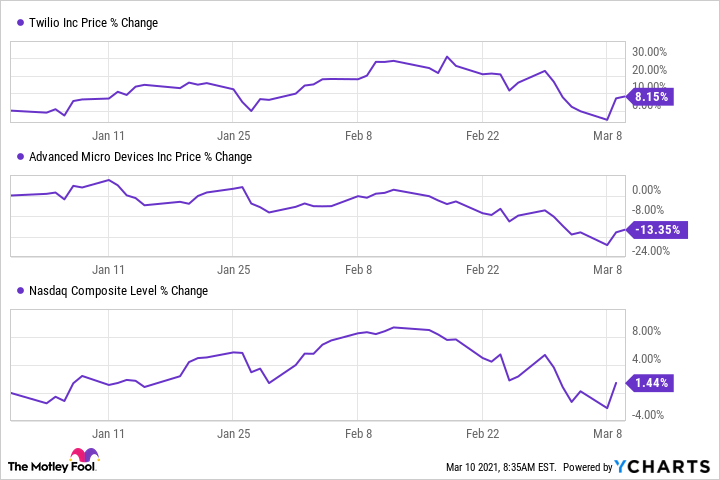 More importantly, it isn't too late to buy shares of Twilio and AMD. Both tech stocks are trading at cheaper levels than they were last year, and look all set to grow at faster paces in 2021.

Twilio has entered 2021 with terrific momentum

Twilio had a fantastic 2020 as companies accelerated their shift to cloud-based contact centers amid the coronavirus pandemic. The cloud communications specialist's revenue shot up by 55% to $1.76 billion, and it booked non-GAAP operating income of $35.7 million as compared to its non-GAAP operating loss of $1.8 million in 2019.

It is worth noting that Twilio's business got a particularly big shot in the arm in Q4. Revenue rose a whopping 65% year over year thanks in part to the contributions from customer data platform provider Segment, which it acquired during the quarter, as well as from political campaign-related traffic. However, Twilio's guidance for the first quarter suggests that it can match -- or even exceed -- its 2020 performance.

Twilio anticipates $526 million to $536 million in revenue this quarter, a year-over-year jump of around 45% at the midpoint of the range. However, don't be surprised to see Twilio beat its forecast.

The company can drive additional spending from its existing customers now that it has added Segment to its portfolio. That's because Segment is a leading player in the fast-growing software-as-a-service customer data platform market, and had a market share of 9% at the end of 2019. Segment was growing at a terrific pace before Twilio snapped it up, clocking 88% revenue growth in 2019.

The customer data platform market is expected to grow at a compound annual rate of 34% through 2025, according to a third-party estimate. This bodes well for Twilio, as it now has one of the top companies in this space in its portfolio, and also has more than 200,000 active clients to whom it can pitch Segment's offerings.

As a result, customers could end up spending even more money on Twilio services, further boosting its dollar-based net expansion rate, which stood at 139% in the fourth quarter of 2020 as compared to 125% in the prior-year period.

On the other hand, the cloud-based contact center market can keep growing in 2021 and beyond, thanks to the cost and operational advantages they enjoy over traditional contact centers. All of this tells us why analysts are upbeat about Twilio, anticipating nearly 40% revenue growth in 2021 and a 30%-plus jump in 2022. What's more, the strong top-line momentum is expected to translate into solid bottom-line gains. 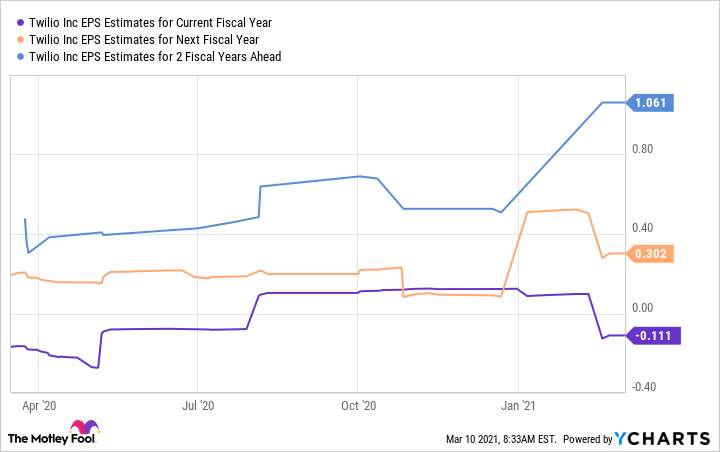 Twilio stock is trading at just over 30 times sales. While that's definitely expensive, it's still lower than the company's 2020 average price-to-sales ratio of more than 31. So investors with higher risk tolerances and an interest in fast-growing cloud stocks may still want to take a close look at Twilio given its huge potential.

AMD has usually traded at premium valuations thanks to its rapid rate of growth. But the stock has become cheaper in 2021 due to the combination of a sharp spike in earnings and a steep pullback in the share price. 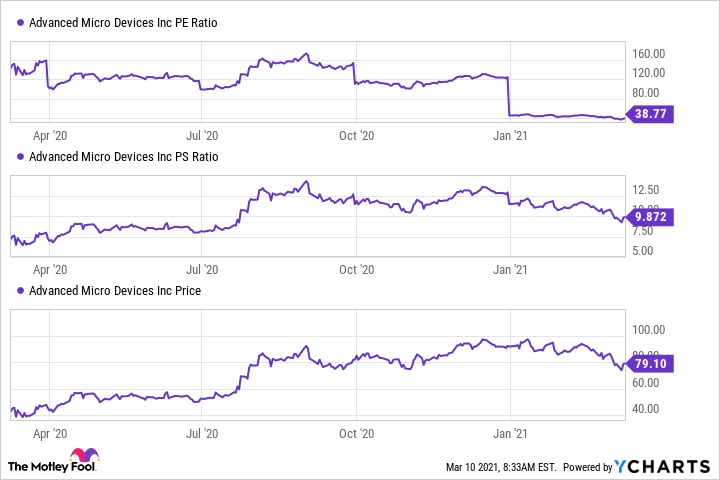 For instance, AMD's price-to-earnings (P/E) ratio of under 39 is a whopping discount to its five-year average multiple of over 131. Even last year, AMD was trading at nearly 124 times earnings. The P/S ratio is also at a nice discount over last year's average of almost 12.7. The simple reason why AMD is so cheap right now is because of the sharp spike in earnings and a lower stock price this year on account of the tech sell-off. In fact, AMD's earnings are growing at a much faster pace than its stock price of late, leading to its relatively cheap valuation. 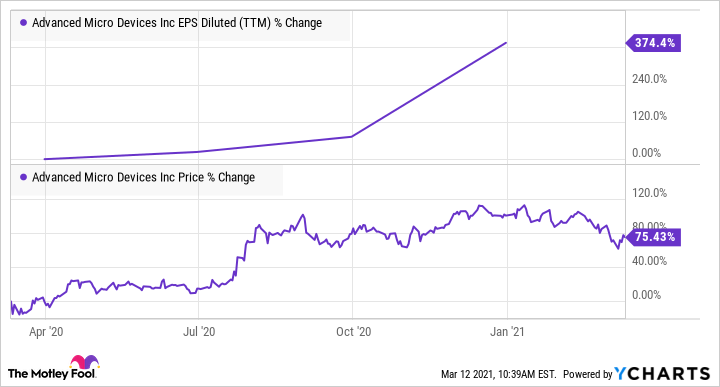 Throw in the fact that AMD expects to deliver nearly 40% revenue growth once again in 2021, closely matching its 2020 performance, it becomes clear why buying this chipmaker right now looks like a no-brainer.

In fact, AMD is sitting on stronger catalysts in 2021. The semi-custom business, for example, is set up for a banner year as the new Sony and Microsoft gaming consoles are in huge demand. AMD is making chips for both these consoles, and that's translating into massive revenue growth for the company's enterprise, embedded and semi-custom (EESC) business.

In addition, the chipmaker is about to turn up the heat on rival Intel in the server market with a new generation of EPYC processors. AMD ended 2020 with a 7.1% share of the server market as compared to 4.5% in Q4 2019. Its third-generation EPYC server processors could help it further boost its presence in this lucrative space, as rumors suggest that they'll significantly outperform Intel's competing server processors.

AMD estimates that the server processor market could be worth $19 billion in revenue by 2023, so the company has a lot to gain by increasing its share of the market. Meanwhile, AMD is also taking the fight to Intel in the market for personal computer CPUs. It is enjoying improved pricing power and witnessing a sharp spike in shipments at the same time, trends that are likely to continue on account of the technological advantages AMD enjoys over Intel.

Thanks to such tailwinds, analysts expect AMD to deliver attractive top- and bottom-line growth in the coming years. 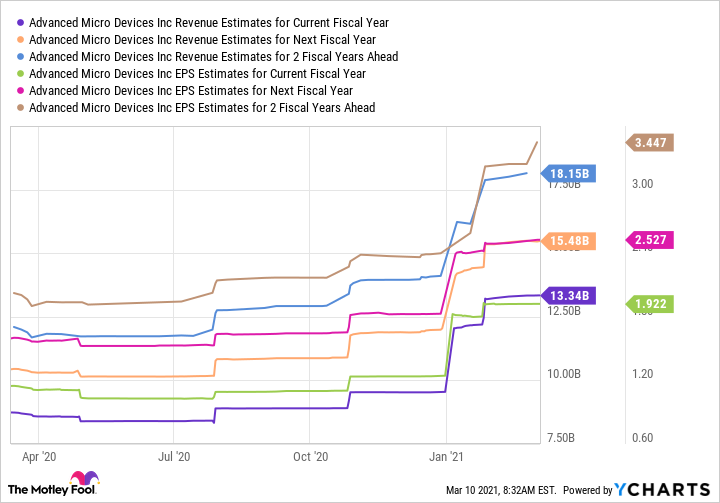 So, investors looking for a potential growth stock trading at a reasonable valuation shouldn't ignore AMD. It's trading at cheaper valuations than it has in the past and looks capable of delivering nice gains in the long run.