Please ensure Javascript is enabled for purposes of website accessibility
Log In Help Join The Motley Fool
Free Article Join Over 1 Million Premium Members And Get More In-Depth Stock Guidance and Research
By Harsh Chauhan - Feb 22, 2021 at 8:47AM

Advanced Micro Devices (AMD -3.28%) was in shambles six years ago. Its processors were massive failures when compared to what Intel (INTC -0.86%) was offering, leaving AMD with almost no market share in the server space and a failed personal computer chip business. Its Bulldozer-based FX-8150 processor, for example, was reportedly 40% to 50% slower than Intel's comparable offering at that time.

In the intervening years, though, AMD has come a long way. It's now the performance king in gaming CPUs -- and that's forcing Intel to fish for sales in the lower end of the market.

Mercury Research reports that Intel clawed back some market share from AMD in the fourth quarter on a sequential basis. AMD's share of the desktop processor market fell from 20.1% in Q3 to 19.3% in Q4. Its share of notebook PCs also fell to 19% in Q4 from 20.2% in Q3.

However, the way Intel increased its market share last quarter was a throwback to AMD's old strategy -- undercut the competition on pricing. Intel shipments of lower-end processors increased during the quarter. What's more, Intel's processors were selling at a discount. Given that it was difficult for would-be customers to even find AMD's processors as huge demand outstripped supply, Intel made merry in the budget end of the CPU market.

As a result, Intel's PC CPU shipments shot up by 33% in the fourth quarter. But those gains came at the cost of margins. Chipzilla's non-GAAP gross margin fell by 1.7 percentage points. Intel expects its gross margin to decline approximately 4 percentage points in the current quarter, with an increase in shipments of small core PC units contributing to the decline.

Tom's Hardware reports that Intel has reduced the prices of its 10th-generation processors to make them more competitive with AMD's offerings. This may result in more market share for Intel, but it would come at the cost of margins and profits. AMD, meanwhile, is taking the opposite route and is focusing on its higher-margin products.

AMD's improved pricing power will be a tailwind for the stock

AMD CEO Lisa Su explained on the last earnings conference call that the company faced supply constraints in the lower end of the PC and gaming markets. However, demand for the company's higher-end processors was reportedly strong. Mercury Research estimates that AMD shipped nearly 1 million units of its latest Ryzen 5000 processors during the quarter. That's impressive considering that the new Ryzen 5000 processors only went on sale in the first week of November. AMD reportedly shipped 5 million desktop processors for the entire year, which means that 20% of its shipments came in the final eight weeks of 2020. This reflects the strong demand for Ryzen processors despite their higher prices.

As a result of that pricing power, AMD's gross margin increased 190 basis points in 2020 to 45%, and the chipmaker expects the trend to continue in 2021 with an expansion to 46%. Moreover, Intel may not find a way to compete with AMD in the higher end of the market as its competing 10-nanometer (nm) desktop processors aren't expected to reach consumers until the second half of the year.

Until then, AMD's 7nm-based processors can be expected to rule the roost in the higher-end CPU market. What's more, AMD could stay ahead of Intel on the technological curve as its Zen 4 processors based on a 5nm process node are expected to arrive in 2022. Rumor suggests that those chips could offer a big jump in performance from the current Ryzen processors.

All of this indicates that AMD will have room to flex its pricing muscles and boost its bottom line. Not surprisingly, AMD's earnings are expected to increase at a nice pace, while Intel's bottom line is expected to shrink. 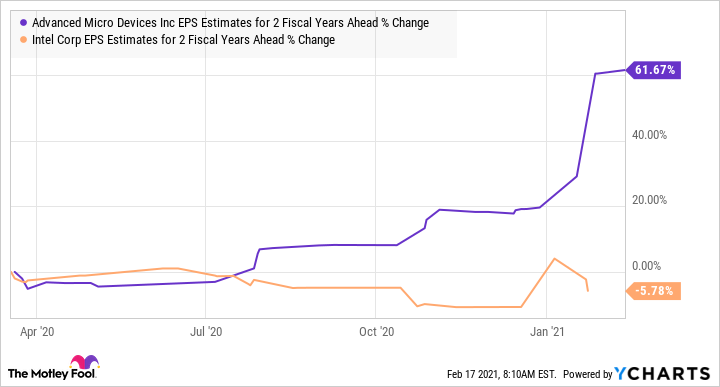 AMD EPS Estimates for 2 Fiscal Years Ahead data by YCharts

Based on all this, investors should look past the gains Intel has scored in the CPU market of late. AMD could continue to enjoy a mix of volume and price growth because of its superior offerings and remain a top growth stock for some time to come.