Chipzilla is conceding ground rapidly to its smaller rival.

Semiconductor manufacturer Advanced Micro Devices (AMD -2.85%) has been taking substantial chunks out of Intel's (INTC -3.71%) big CPU (central processing unit) market share pie quarter after quarter, and it repeated its strong showing in the third quarter of 2020 as well.

According to Mercury Research, AMD exited the quarter with 22.4% of the x86 CPU market including desktops, notebooks, and workstations -- an increase of 6.3 percentage points over the prior-year period. This was AMD's highest share of the overall CPU market since the final quarter of 2007. And what's most impressive about this effort is that the latest numbers don't include the impact of AMD's latest Ryzen 5000 processors that were launched after the quarter ended and are reportedly leaving Intel in the dust in terms of performance. 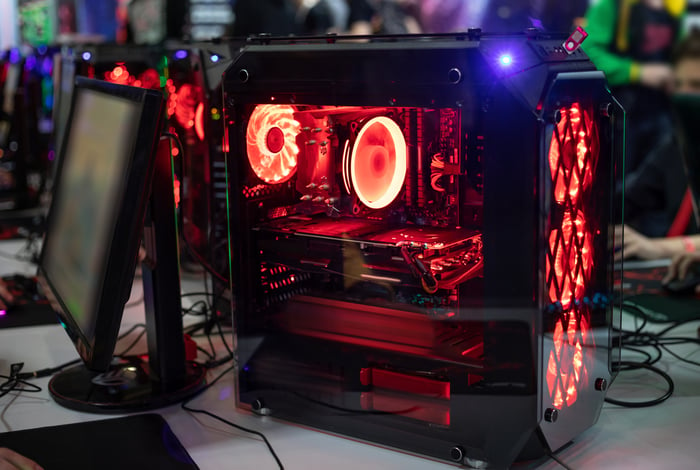 AMD is about to heap more pain on Intel

Intel has been gifting AMD CPU market share for over a year now thanks to a variety of reasons, including a shortage of parts and a technological disadvantage. AMD's impressive growth shows that it has swooped in to take advantage of Intel's shortcomings. And now, a new product lineup is likely to help AMD further erode Intel's dominance in the CPU market as the initial reviews of the Ryzen 5000 CPUs indicate.

This seems to be translating into strong initial demand for the new chips. AMD's Ryzen 5000 processors were hard to find soon after going on sale, with management claiming that the company is overwhelmed by extremely high demand that has outpaced supply.

If that's indeed the case, AMD's CPU market share is likely to increase further in the final quarter of 2020. What's more, Intel's inability to put up a potent competitor against the Ryzen 5000 processors will be another tailwind for AMD during the holiday season. Chipzilla is expected to counter AMD's latest processors with the Rocket Lake chips in the first quarter of 2021.

But Chipzilla's offerings aren't expected to pack enough punch to give the Ryzen 5000 series a run for its money. The Rocket Lake chips will be based on a 14-nanometer node while AMD's current Zen 3 microarchitecture is based on a refined 7nm process. The smaller manufacturing node means that the transistors on AMD's chips are tightly packed, which makes them more power efficient and enhances processing power.

With Intel's competing 10nm process still a year away, at least, AMD is likely to keep up the pressure on Chipzilla and corner a bigger share of the CPU market.

AMD attributed the sharp spike in revenue to higher Ryzen processor sales during the quarter that were good enough to offset lower graphics revenue. This makes it evident that Ryzen sales move the needle big-time for AMD, though the company doesn't point out exactly how much revenue it gets from selling CPUs.

More importantly, AMD's growing share in CPUs bodes well in the long run, as it sees $32 billion worth of total addressable market opportunity in PCs (personal computers). And with Intel not expected to put much of a fight as it plays catch up, AMD could witness a big jump in computing and graphics revenues in the forthcoming quarters and remain a top growth stock, as it has so far in 2020.