Please ensure Javascript is enabled for purposes of website accessibility
Log In Help Join The Motley Fool
Free Article Join Over 1 Million Premium Members And Get More In-Depth Stock Guidance and Research
By Keith Noonan, James Brumley, and David Butler - Mar 28, 2021 at 7:30AM

Heads up. This dynamic could have a huge impact on your portfolio.

The tech-heavy Nasdaq Composite index is trading down roughly 8% from its recent high, but the index's level has still risen roughly 173.5% over the last five years. Despite very low interest rates and assurance from Federal Reserve officials that its lending rates will remain at basement levels for the foreseeable future, growth stocks have been battered over the last month and investors have shifted some of their dollars into value stocks that look less prone to volatility.

What comes next? The tea leaves are difficult to read on this one, and there's a huge range of variables that could impact relative performance. With that in mind, we asked three Motley Fool contributors how they think the "value vs. growth" dynamic will shake out. Here's what they had to say. 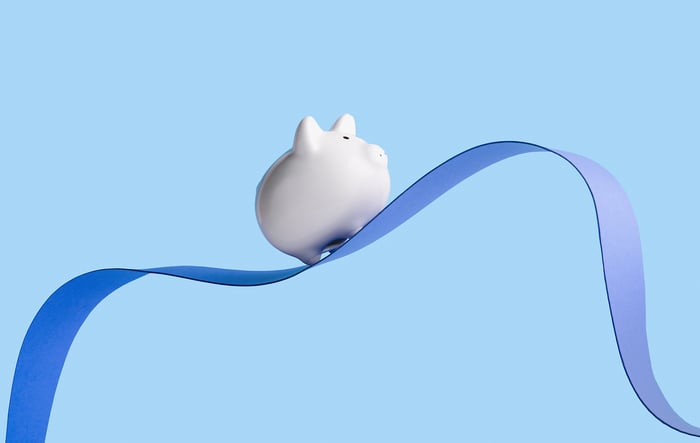 Keith Noonan: Companies in the energy and industrials sectors have held up relatively well over the last couple months, while valuations for growth-dependent technology stocks have been taking a beating. An investor rotation away from growth stocks in favor of value stocks certainly seems to be underway.

Being able to borrow money and sell corporate bonds at low interest rates is great for tech companies, because growth initiatives can be funded for cheap. With Treasury bond yields rising sharply over the last month, there appears to be increasing sentiment among investors that the era of extremely cheap debt may come to an end quicker than growth investors would like. Recent comments from Federal Reserve Chairman Jerome Powell and Treasury Secretary Janet Yellen suggesting that some valuations had become stretched also seem aimed at tech and other highly growth-dependent market categories.

A relatively speedy economic recovery from the coronavirus pandemic can reasonably be expected to take the wind from the sails of some richly valued cloud services and digital communications stocks, and this could have a ripple effect for other growth stocks even if sales and earnings for the underlying companies continue to grow at a rapid clip.

However, the tech sector remains one of the best places to look for companies creating innovative products and services that have uses across industries, and investors will likely be rewarded for jumping on high-quality growth stocks that fall out of favor.

James Brumley: I've got a feeling value stocks are finally going to shine again after lagging growth stocks for years. This leadership change isn't rooted in any shift in superiority, though -- today's value stocks look about the same as they did three years ago and three decades ago, and ditto for growth. Rather, the shift is instead a reflection of how investors' attitudes and perceptions evolve over time.

It's admittedly tough to see, but what the market rewards changes over time. The past several years have supported premium valuations for the very best growth stories, but at the expense of value stories. Now I sense a renewed period of appreciation for value on the horizon. 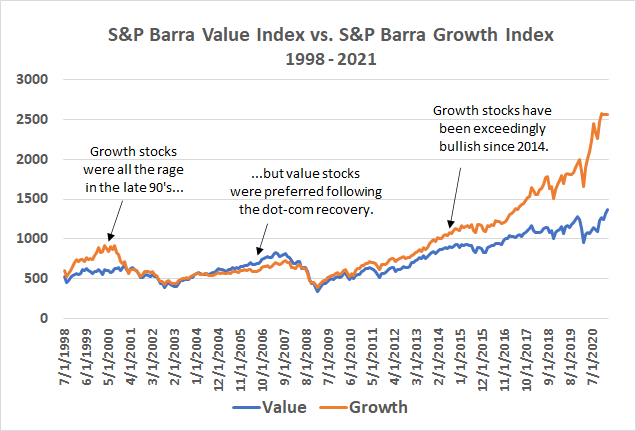 The clue pointing me in this direction (aside from growth's incredible run-up) is the swell of recent "expert" commentaries demanding that value investing is dead, and that there will never again be a reason not to invest in growth. That's typically what marks the end of a movement -- the unwavering certainty in it.

I know that sounds counterintuitive, and to be fair, there's always some faction that's going to criticize a particular investing approach. As a contrarian, however, I can't help but notice when the naysaying reaches a frenzied peak, like the value-bashing rhetoric did last year. So it's time for long-term investors to start easing into more exposure to value names like CVS Health (CVS 1.92%) or Goldman Sachs (GS -0.45%). I'm a particularly big fan of Verizon (VZ 0.88%) here.

David Butler: It's tough to ignore the impact that so much government stimulus has had on the economy in the short term. The trillions in government spending approved over the last 15 months stands to continue having an inherent effect on the stock market. To that, the broader market certainly has the legs to stay strong over the next year. Overall, I prefer value at this point.

Lately, some of the best-performing stocks have been cheap financial stocks. Even an underperforming bank like ING Group (ING -0.50%) has climbed around 30% in the past three months. General Motors (GM -1.99%) is up over 30% in the last three months, as investors look for more reasonable prices in the ever-popular electric vehicle trade. GM and Volkswagen (VWAGY -0.61%) are much better priced than Tesla (TSLA -6.42%) or Nikola (NKLA -3.11%) at this point. And frankly, they're on their way to producing far more electric car models than the EV start-ups everyone is chasing.

If you're going to play growth, invest in very high-quality growth stocks. Amazon (AMZN 0.25%) is positioned to continue dominating retail. NVIDIA (NVDA -2.51%) is positioned in the chip market that will be more and more in demand for devices that we use daily. This is the kind of stuff that can keep going up, based on actual sales.