Please ensure Javascript is enabled for purposes of website accessibility
Log In Help Join The Motley Fool
Free Article Join Over 1 Million Premium Members And Get More In-Depth Stock Guidance and Research
By Jason Hawthorne - Apr 10, 2021 at 6:57AM

The future of computing is now.

Quantum physics sounds like science fiction to most people. That's because until recently, it has been largely theoretical. It describes the behavior of atoms and fundamental particles, and asserts that these can be in two states at once or somehow entangled with one another despite being separated by a vast distance.

Quantum computing uses its "spooky" principles to tackle problems that are too complex for traditional computing. While traditional computers represent every operation in binary digits, or bits (zeros and ones), qubits (quantum bits) offer an infinitely faster method since they have no fixed state. Tech giants like Microsoft (MSFT -0.47%) and Alphabet (GOOG -1.53%) (GOOGL -1.51%) have been racing to build useful quantum computers, but IBM (IBM 0.32%) just signed a partnership that could vault it to the top of the pack in the healthcare space. 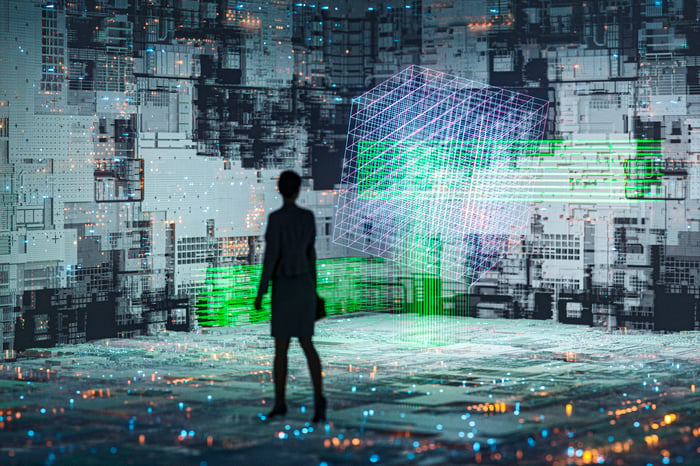 IBM agreed to a 10-year tie-up with the Cleveland Clinic as its official partner for artificial intelligence (AI) and quantum computing. In the deal, the nonprofit academic medical center would have the first on-premise quantum computing system in the private sector. That's no small feat considering the system requires near absolute zero temperatures (about negative 469 degrees Fahrenheit) and a continuous supply of helium and liquid nitrogen to operate.

The goal is to use the computing power to generate and analyze data in areas like genomics, population health, and chemical and drug discovery. As an example, it currently takes about 15 years  for a new therapy to be developed and tested before it gets to patients. This technology could reduce that to weeks if not days. It won't be the first time the two institutions have partnered on AI. They previously worked together using IBM's Watson to assist physicians and help guide care across a patient's entire journey through the healthcare system.

To understand why it is such a leap forward, it's helpful to find a clear-cut comparison. University of Virginia researchers recently deployed a "toy", or simplified, problem on an IBM quantum system to classify genomic data. If they used all four DNA building blocks to perform the classification (A,G,C, and T), a traditional computer would execute three billion operations to perform the task. Using a quantum computer, it took 32. In a similar jaw-dropping display in 2019, Google's quantum computer was able to complete a task in 200 seconds that  would have taken an estimated 10,000 years on a traditional computer. Quantum computing controls the atoms and fundamental particles in the system, assigning identity, like a probability, rather than a zero or one. Not only does that make it more efficient, it means natural systems can be modeled more accurately.

It could enable super-fast drug development with clinical trials conducted on virtual humans, instantaneous genome sequencing for a personalized prescription, or the creation of comprehensive electronic health records (EHRs) using every piece of relevant data to generate truly predictive care. It would even be possible to search every molecule and simulate its interaction with different types of cells to identify a cure for a disease. There is already precedent.

In 2015, AI-based firm Atomwise took four months using artificial intelligence to search existing drugs and identify two as potential candidates to treat Ebola. Imagine if quantum computing could have been used for a COVID vaccine and tested on tens of thousands of virtual humans in a matter of days. Moderna's COVID vaccine had been designed by mid-January of 2020. It was the clinical trial that took ten months. With quantum computing, we might have the vaccine for the next pandemic the same week it is declared.

Peter Chapman, the former director of engineering for Amazon Prime and current CEO of IonQ (a Microsoft partner), believes quantum computing will also produce a human-like AI. In medicine for example, there is no way a doctor can have full knowledge of the latest information available, but a quantum computer could sift through all the medical studies at once and offer support for any decision a doctor has to make.

Whether IBM commercializes it first or not, it appears the future of computing is quantum. Despite the technical challenges of deploying a quantum system, the economic potential is too large not to solve them, and advances keep coming. Last year, a team in China claimed supremacy with a system that is 10 billion times faster than the one Google highlighted in 2019.

For investors, there are a growing number of ways to invest in the potential of quantum computing. Aside from the technology giants, Honeywell (HON -0.90%) has also promoted its quantum system, and IonQ is planning to go public through a special purpose acquisition company (SPAC) called DMY Technology Group (DMYI). It's hard to say which company will ultimately succeed. IBM's relationship with the Cleveland Clinic and its on-site quantum system give it a leg up in accessing large amounts of data and rolling out applications. As Tesla has shown with autonomous driving, a data advantage in artificial intelligence applications can compound very quickly, rendering competitors mere technological footnotes.