These are investments you can buy and forget about.

Do you want to stop checking on your portfolio and worrying about whether it's up or down? You can avoid many of the headaches involved with investing if you stick to buying blue-chip stocks that you plan to hold for decades rather than years or months. This can simplify your investing strategy while also minimizing your long-term risk.

Below are three solid stocks that you can buy and forget about. Each is in a good position to withstand any adversity in the markets, including crashes. And they'll likely be great sources of recurring income for your portfolio for many years to come.

Abbott Laboratories (ABT 0.15%) makes for a terrific investment for many reasons. For long-term investors, it starts with the Illinois-based company's rich history of dividend growth. This year, it hiked its dividend by 12.5%, marking the 48th year in a row that shareholders saw their dividend income rise. Abbott is well on its way to becoming a Dividend King in a couple of years.The dividend currently yields about 1.4% annually, a bit short of the S&P 500 average of 2%. 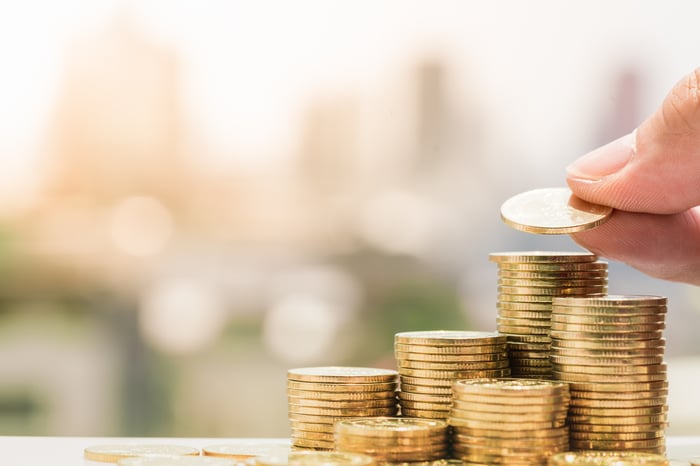 Another reason Abbott makes for a solid investment is that its business is so diverse. Medical device sales accounted for 38% of its total revenue in 2019, while diagnostic and nutritional products each made up about 24% of sales. Pharmaceutical sales, which totaled $4.5 billion, accounted for the smallest piece of the top line at just over 14%. Abbott also sells its products all over the world, and the U.S. market represented just 36% of its revenue this past year.

With diversification through its products and geographical areas, Abbott has many opportunities to deliver more growth in the years to come. And only once during the last 10 years has its profit margin failed to top 5%.

The company's also been integral in COVID-19 testing, shipping out 5.3 million of its rapid ID NOW tests throughout the country in an effort to help stop the spread of the coronavirus.

Beverage maven Coca-Cola (KO 0.88%) has some similarities with Abbott. Like the healthcare giant, Coca-Cola investors see regular increases to their dividend payments. And while Abbott's on the verge of hitting the 50-year mark for consecutive increases, Coca-Cola's already well past that threshold. On Feb. 20, the Georgia-based company raised its payouts for the 58th year in a row, from $1.60 to $1.64 annually. The stock's current dividend yield is 3.4%.

And like Abbott, the company's business is diverse, with more than 500 brands around the world and its products sold in more than 200 countries. Coca-Cola's even less exposed to the U.S. than Abbott, with just 31% of its sales in 2019 coming from its home market. In nine of the past 10 years, Coca-Cola's netted an impressive profit margin of at least 15%.

COVID-19 has hit the company hard, with net sales in the second quarter down 28% year over year. Many restaurants and other businesses were shut down during the quarter, affecting demand for Coca-Cola's products. However, there's little doubt the company will rebound once the economy gets back to normal.

With solid fundamentals and an impressive dividend, it's little wonder that this is one of Warren Buffett's top stocks.

International Business Machines (IBM -0.33%) is another household name that long-term investors can buy and forget. The New York-based company isn't anywhere near Coca-Cola or Abbott when it comes to its dividend streak, but it did recently join the club of Dividend Aristocrats after announcing that it would be increasing its payouts for a 25th year in a row on April 28.

Its quarterly cash payment of $1.63 means that investors who buy shares of the company today will be earning a yield of about 5.3% -- the highest on this list.

And IBM is yet another company with a diverse mix of revenue. From cloud software to business and technology services and beyond, the company's in an excellent position to add value to businesses, especially as they move to the cloud. Its acquisition of Red Hat last year has only added to both IBM's customer base and its capabilities. In 2019, 37% of IBM's sales came from the U.S., so it too generates the bulk of its revenue from other markets.

In second-quarter results July 20, sales were down 5% year over year, but total cloud revenue was up 30% and Red Hat's sales grew by 17%. And like the other companies on this list, IBM is no stranger to a a strong bottom line, recording a profit margin of at least 10% in all but one of the past 10 years.

Here's a look at how all the stocks are doing this year compared with the S&P 500: 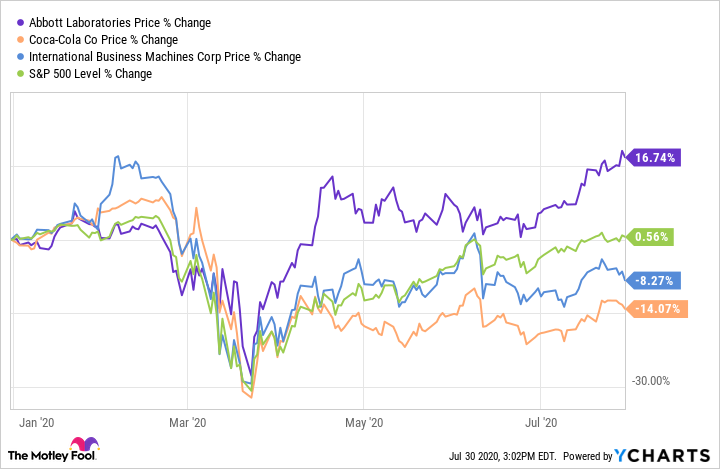 Only Abbott's outperformed the index this year, likely because of its involvement in COVID-19 testing and the positive press surrounding that. All these stocks are good buys, but let's take a look at their respective price-to-earnings ratios to narrow down which one provides the best bang for its buck right now: 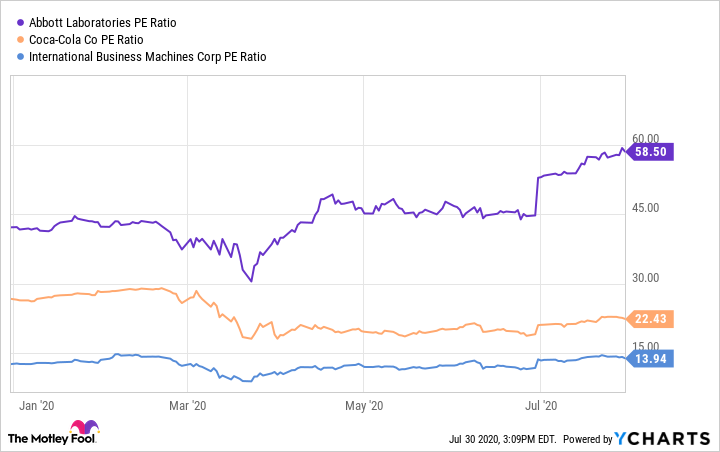 ABT PE Ratio data by YCharts

Thanks to its more modest valuation, I'd go with IBM. The tech stock is still generating some good growth in certain areas of its business, and with more businesses moving toward remote work and the cloud, it looks like there will be many opportunities for even more growth ahead. It's also hard to go wrong with the highest dividend yield on this list.