Please ensure Javascript is enabled for purposes of website accessibility
Log In Help Join The Motley Fool
Free Article Join Over 1 Million Premium Members And Get More In-Depth Stock Guidance and Research
By Will Healy - Mar 4, 2021 at 7:07AM

A major spinoff and increasing cloud focus will influence the company's direction.

International Business Machines (IBM -0.91%) has redefined itself since Arvind Krishna became CEO in April. The company's moves to increase its cloud focus and spin off a key legacy business will probably make IBM a different tech stock over time. Hence, the degree to which IBM can remake itself as a cloud company will likely determine how much its stock grows over the next five years.

IBM spent most of the last decade struggling as a business that helped companies design and run IT systems and businesses. As the tech industry evolved, its stock peaked back in 2013 and steadily slid amid slowing growth. Looking to align the company with the current tech environment, IBM spent $34 billion to buy cloud giant Red Hat in 2019.

Krishna, who headed IBM's cloud and cognitive software division at that time, spearheaded this acquisition. Red Hat brought IBM into the hybrid cloud market, which it describes as a "$1 trillion market opportunity." With a hybrid cloud system, public and private clouds seamlessly and securely interact, a feature most cloud systems need. 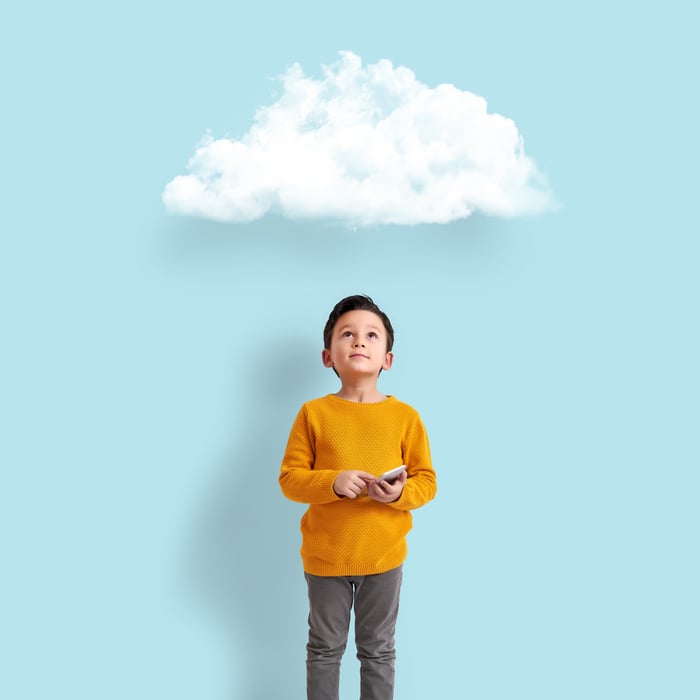 Although NewCo claims a $60 billion backlog, revenue fell by almost 6% in 2020 within global technology services (GTS), the division in which NewCo currently resides.

NewCo represents $19 billion of the company's $73.6 billion in revenue, only slightly below the $23.4 billion that the cloud and cognitive software division generated in 2020. This means that after completion of the spinoff, cloud and cognitive software will emerge as IBM's largest division. Nonetheless, IBM will also design and operate IT systems through business services, build supercomputers within its systems division, and offer payment options through global financing.

On the Q4 2020 earnings call, Krishna estimated that IBM's overall revenue would rise by mid-single-digit levels in 2022 and beyond after the spinoff, growth likely driven by the hybrid cloud. Cloud revenue increased by 19% in 2020, slightly above the compound annual growth rate (CAGR) of 15% that Grand View Research forecasts for the global cloud computing market through 2027. The gap between these growth rates and IBM's future projections suggest that the company may need more asset sales or spinoffs to rid itself of underperforming assets.

Also, IBM still must catch up as it lags far behind cloud competitors such as Amazon's AWS and Microsoft's Azure. According to Gartner, IBM makes up less than 2% of the infrastructure-as-a-service market, compared with 48% for Amazon and 16% for Microsoft.

Nonetheless, with its assets from Red Hat, IBM believes it can make itself the "default choice" for hybrid cloud architecture. This will occur through its open-source Linux operating system; containers, which package software applications to easily run on a wide variety of systems; and Kubernetes, a system for deploying containerized apps.

Additionally, hybrid clouds can struggle with compatibility and complexity. Both AWS and Azure claim compatibility across different kinds of computers and operating systems. Still, a default architecture like IBM proposes could make hybrid clouds more efficient. This, along with its expertise in services and business relationships spanning decades, could foster a competitive advantage for IBM. New partnerships with Lumen Technologies, Delta Air Lines, Humana, and Palantir Technologies in the last month alone point to IBM's tech acumen.

Moreover, investors will probably have to wait for the spinoff before they see any signs of a turnaround. In 2020, IBM's overall revenue fell by 5% from year-ago levels, leading to a 41% decline in net income.

Amid the revenue decline, sales, general, and administrative expenses climbed 12%, while other income of almost $968 million in 2019, fueled by an asset sale and one-time gains that year, became an expense of $861 million in 2020.

Also, thanks in large part to the drop following the January earnings announcement, IBM stock fell by 9% over the last year. Given that decline, some might wonder why IBM is still a buy. 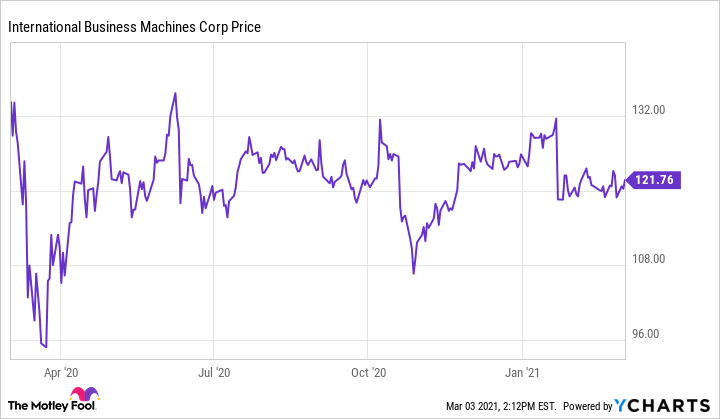 Nonetheless, IBM pays investors well to wait. Its annual payout of $6.52 per share yields a 5.4% cash return at current prices, more than triple the 1.5% yield of the average S&P 500 stock. The payout has also risen for 25 years in a row, making it a new Dividend Aristocrat.

Additionally, IBM can maintain this dividend and the increases needed to hold its Aristocrat status. Its $10.8 billion in free cash flow in 2020 easily funded the $5.8 billion in dividend costs for that year. Although it carries a staggering $61.5 billion in debt, the company managed to cover $1.3 billion in interest payments in 2020. IBM also has paid off $11 billion in debt since purchasing Red Hat in July 2019, indicating that the company has strengthened its balance sheet during that time.

Also, CFO Jim Kavanaugh said that the two companies will maintain the combined dividend level after the separation. Kavanaugh also expects IBM to pay a "secure dividend" and preserve a "sustainable dividend growth policy." Still, IBM left no indication of what share of the dividend it will hold after the NewCo spinoff.

As with the dividend, much can happen with the company over the next five years. However, with the NewCo spinoff, the infrastructure business will no longer weigh down IBM's financials. Moreover, with the double-digit CAGR predicted for the cloud industry, IBM appears positioned to foster its hybrid cloud niche and maintain its Dividend Aristocrat status.

Nonetheless, success for the stock will likely depend on continuing the growth of Red Hat and either revitalizing or spinning off lower-performing divisions. Such expansion will probably make the difference between IBM becoming a top cloud stock and it remaining a smaller cloud player.