Please ensure Javascript is enabled for purposes of website accessibility
Log In Help Join The Motley Fool
Free Article Join Over 1 Million Premium Members And Get More In-Depth Stock Guidance and Research
By David Jagielski - Apr 23, 2021 at 6:45AM

This combination of cannabis and tech can diversify your portfolio and set you up for long-term growth.

Low-priced stocks can be attractive buys because there is a lot of potential for them to double or even triple in value -- if the company is built to do well over the long term. I can think of a few stocks trading for less than $10 that have excellent growth opportunities ahead, and are about as cheap as a few cups of coffee. 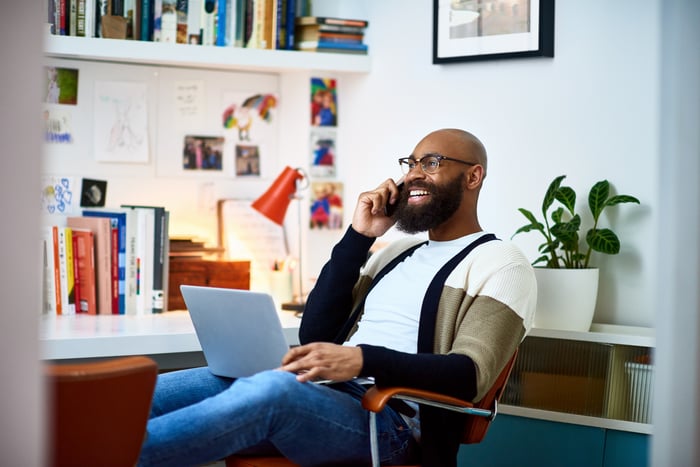 Cannabis company Planet 13 trades at less than $7 per share, but investors shouldn't expect it to stay this low for too long. On April 5, the company released impressive results for its most recent quarter, which ended on Dec. 31, 2020. Sales of $20.1 million grew 21.8% year over year, and its adjusted EBITDA finished in the black at $300,000. It's a strong performance given that the pandemic is keeping travel volumes low and the company's Las Vegas-based SuperStore isn't getting the foot traffic it would normally expect.

But since vaccines are expected to help the economy rally in the second half of 2021, Planet 13 could become one of the more exciting pot stocks to watch. It will benefit from more travelers and a greater sense of normalcy. On top of that, Planet 13 is launching its next SuperStore. This one is in California and just minutes away from Disneyland. The company expects the Santa Ana location to open this July.

Shares of Planet 13 currently trade at a forward price-to-sales (P/S) multiple of more than eight. That is a bit high compared to multistate operators like Curaleaf Holdings and Trulieve Cannabis, which trade at seven and five times their future revenue, respectively. However, Planet 13's strategy of focusing on a big entertainment and tourism complex shows perhaps more potential than a normal dispensary, as its differentiation strategy could attract a wider range of consumers.

A recent survey by vacation rental company Vrbo found that once things get back to normal, 65% of people plan to travel more often than they did before the pandemic. All that pent-up demand could help Planet 13's strategically located SuperStore locations bring in much better numbers than analysts expect, which is why I believe this stock is worth the current premium.

BlackBerry benefited from a Reddit-fueled rally earlier this year when its shares jumped as high as $28.77. You have to go back nearly a decade for the last time the stock was trading that high. Now that the dust has settled, BlackBerry's stock is back to less than $9 a share. This is a more realistic price for the company, which is what I would call a "work in progress."

What I like about the company is that its business operates at much higher gross margins than it did when the company was a big cellphone maker, which can help its prospects for long-term profitability. Over the past few years, its gross margins have been above 70%. Go back to 2017, and that percentage drops to less than 50%.

BlackBerry has been transitioning toward more of a service-based business which helps maximize margins. From cybersecurity to self-driving software, it is in a lot of attractive sectors that could position the company for some long-term growth. BlackBerry recently partnered up with Amazon Web Services to collect and analyze data for car manufacturers using sensors that can add value for drivers by helping them navigate difficult weather conditions, or just to stay on top of their kids' driving habits.

The biggest obstacle today is translating all those opportunities into tangible results. Over the past four quarters, BlackBerry's sales have been stuck within a range of $206 million to $259 million in revenue. Meanwhile, the company has been incurring losses in each of those periods. The good news is that the business is at least generating positive free cash flow.

BlackBerry can be a frustrating stock to own, but for investors who are willing to be patient, there is potential to earn a great return here. Trading at a forward P/S multiple of six, it isn't the cheapest stock to buy. However, that is still in line with the typical holding in the Technology Select Sector SPDR Fund, which also trades at around six times its revenue.

Given the attention that BlackBerry stock has shown it can generate from retail investors, its value could take off if it is able to deliver the results investors have long been craving. And with multiple growth avenues in its path, it may only be a matter of time before that happens.