Please ensure Javascript is enabled for purposes of website accessibility
Log In Help Join The Motley Fool
Free Article Join Over 1 Million Premium Members And Get More In-Depth Stock Guidance and Research
By Rich Smith - Apr 23, 2021 at 11:22AM

The third time's a charm for SpaceX.

One week ago, SpaceX notched an important victory over rivals including Blue Origin, Lockheed Martin (LMT 2.56%), and Northrop Grumman (NOC 3.77%) when NASA picked SpaceX's Starship -- and not its rivals' Blue Moon offering -- to be the lunar lander that will carry astronauts to the moon. One week later, SpaceX notched another success: It just launched its third set of astronauts to serve aboard the International Space Station (ISS). 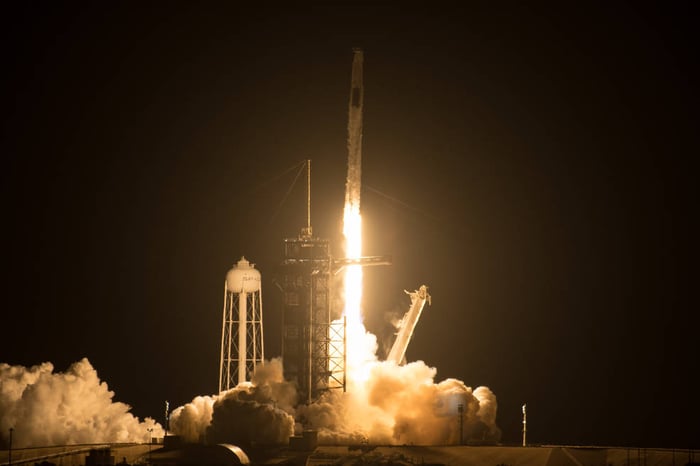 As NASA reported, the launch from the Kennedy Space Center in Florida was at 5:49 a.m. EDT Friday. It carried NASA astronauts Shane Kimbrough and Megan McArthur, Japanese astronaut Akihiko Hoshide, and European Space Agency astronaut Thomas Pesquet at the start of a six-month tour of duty aboard the ISS. Crew Dragon Endeavour was expected to dock autonomously at the ISS around 5:10 a.m. Saturday, April 24.

NASA named this morning's third astronaut launch Crew-2, the reason being that the first successful launch of a piloted Crew Dragon spacecraft atop a Falcon 9 rocket (on May 30, 2020) was dubbed Demo-2, and the second trip Crew-1, which makes today's launch Crew-2.

At this point, it almost seems that launching astronauts to the ISS has become old hat for SpaceX -- as routinely as the way it launches Falcon 9 rockets carrying Starlink satellites into orbit practically every other week, then lands them safely aboard floating rocket pads at sea.

But it's worth reiterating: So far, no other space company is capable of launching, landing, and relaunching its own rockets into orbit. And SpaceX's only rival in manned spaceflight, Boeing (BA -1.01%), still hasn't successfully conducted a piloted launch of its Starliner spacecraft to the ISS even once.

But SpaceX has done it thrice.