Please ensure Javascript is enabled for purposes of website accessibility
Log In Help Join The Motley Fool
Free Article Join Over 1 Million Premium Members And Get More In-Depth Stock Guidance and Research
By Rich Smith - Apr 7, 2020 at 10:51AM

Some say an October or November test flight is likely.

Racing SpaceX to become the first private company to put astronauts in orbit for NASA, late last year Boeing (BA -0.10%) launched an uncrewed, remotely piloted Starliner spacecraft atop an Atlas V rocket on a mission to demonstrate capability to safely travel to and from the International Space Station (ISS).

It did not go well.

Although the United Launch Alliance Atlas rocket performed as expected (Boeing is a part owner of ULA), the Starliner spacecraft failed to fire its engines at the correct time to achieve the "insertion" orbit necessary to reach ISS. Ultimately, Boeing was forced to call off the mission, and bring Starliner home, landing by parachute in the desert at White Sands Test Facility in New Mexico without ever reaching ISS.

Now, Boeing says it is going to try again. 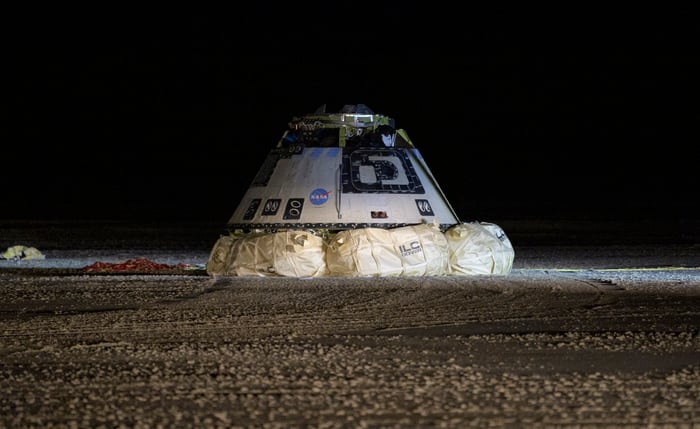 Late Monday, Boeing and NASA announced that Boeing will conduct a second uncrewed flight test of Starliner sometime later this year "to demonstrate the Starliner system [can] perform as designed to fly to the space station prior to having a crew onboard." No exact date for the test has been set, but The Washington Post reports that it will probably take place sometime in October of November.

Meanwhile SpaceX, which successfully flew its unmanned Crew Dragon to ISS in March 2019, is scheduled to send a crewed mission to ISS next month.

Boeing previously took a $410 million re-tax charge to earnings to account for having to do additional test flights. As such, the financial liability of the recent news has presumably already been baked into analyst forecasts for the company. What's new, and certainly disappointing for Boeing, is that the need to redo its uncrewed test flight means Boeing will almost certainly not send astronauts to space before SpaceX.