Please ensure Javascript is enabled for purposes of website accessibility
Log In Help Join The Motley Fool
Free Article Join Over 1 Million Premium Members And Get More In-Depth Stock Guidance and Research
By Courtney Carlsen - Updated Apr 26, 2021 at 11:24AM

These deals have gotten the attention of investors. In total, big banks issued $40 billion in bonds that investors gobbled up. For some banks, like JPMorgan, issuing bonds can help to alleviate some stress from changing regulatory requirements. Other banks issued bonds to take advantage of market conditions and to prepare for the Federal Reserve lifting restrictions put on banks last year. 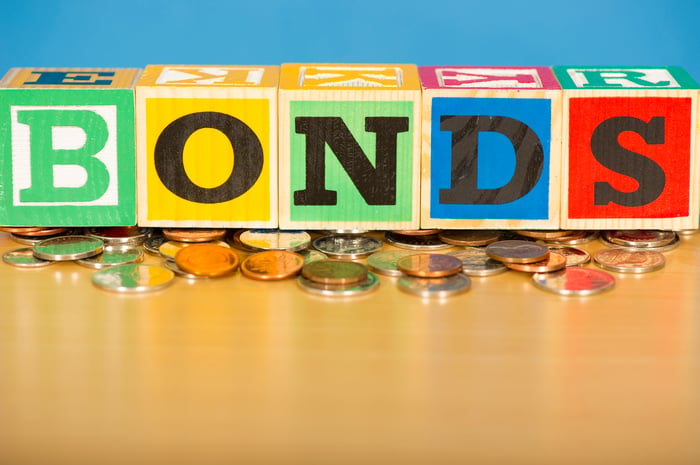 JPMorgan was the first of the major banks to tap the lending market following its solid first-quarter earnings report, which saw the bank post $33 billion in revenue, up 14% from last year and up 15% from its recent quarter.

Bloomberg analyst Arnold Kakuda said that JPMorgan's bond offering may be related to changes in regulatory requirements related to the supplementary leverage ratio (SLR). The SLR requires banks to hold capital that is equal to 5% of their assets for larger banks. Last year, the Fed provided relief on this requirement by allowing banks to exclude U.S. Treasuries and bank reserves from the SLR calculation. Federal officials allowed this relief to lapse on March 31 of this year. For JPMorgan, this presented a difficult situation.

The bank has been vocal for some time about the Federal Reserve allowing SLR relief to lapse. In the first quarter, the bank saw its SLR ratio, excluding the relief, come in at 5.5%, a notch above its 5% requirement. According to CFO Jennifer Piepszak, the growth in the bank's leverage was driven by deposits growing rapidly due to stimulus efforts by the federal government.

What has really put pressure on the bank is the growth in deposits without similar loan growth. As deposits grow, the bank needs to increase loan growth in order to keep its leverage ratio from getting out of whack. Unfortunately for the bank, average deposits in the first quarter were up 36% while average loans only increased 1%. Looking back at 2020, we can see that loan balances were steady, but deposits skyrocketed higher -- nearly 26%.

Piepszak has said that the bank has levers it can pull to manage its SLR. In the first quarter, the bank issued $1.5 billion in preferred stocks, a move that helps alleviate some stress, but a move that also dilutes shareholders and dividends. The issuance of $13 billion in bonds may be yet another way the bank is working to stay comfortably within the leverage ratio requirements, while still having flexibility to return capital to shareholders.

Other banks look to take advantage of market conditions

The demand for corporate bonds has reached a fever pitch as investors are starved for bonds that provide yields with a premium over Treasuries. This high demand, coupled with ultra-low borrowing costs, makes it an attractive environment for companies to issue bonds. Demand for bonds is so strong that JPMorgan and Bank of America were able to achieve better borrowing costs than expected.

The proceeds from these bonds will be used to pay for general corporate purchases, and could help fund share repurchase programs and increased dividends for the banks. Banks may be preparing for the Federal Reserve to lift restrictions on dividend increases and share buybacks as soon as June, following the banks' regularly scheduled stress tests. The added funding will give the banks flexibility when this time comes.

Bank of America CEO Brian Moynihan said that the bank plans to buy back a "substantial amount" of stocks as soon as these restrictions are lifted. The bank announced a $25 billion share repurchase program just last week.

The issuance of bonds is nothing out of the ordinary for these banks, although the total dollar amounts are eye-popping. With Federal stress tests coming up, the banks likely want to make sure they are well-funded and prepared to buy back stocks and increase dividends without affecting leverage and stability ratios.

Investors can see this is a good sign. For one, the lifting of restrictions put in place during the pandemic means the Feds have confidence that the recovery is on. The second half of the year could also be good for banks, as investors will be looking for increasing dividends and stock buybacks to boost stock prices.