Please ensure Javascript is enabled for purposes of website accessibility
Log In Help Join The Motley Fool
Free Article Join Over 1 Million Premium Members And Get More In-Depth Stock Guidance and Research
By Jennifer Saibil - Updated Apr 27, 2021 at 11:08AM

The digital payments company has a great year, and there's more coming in 2021.

Cathie Wood's focus on disruptive technology has made her one of the most-watched investors in the industry. Her firm, ARK Invest, operates several exchange-traded funds (ETFs) based on this philosophy, and one of the top holdings in Wood's Ark Fintech Innovation ETF, at right around 4%, is PayPal Holdings (PYPL -1.56%).

Despite being a household name, PayPal is still growing, and 2020 was its best year on record. The pandemic showed more consumers the value -- and necessity -- of digital payments, and PayPal was well-positioned to benefit from that trend. While many companies may find 2021 challenging as they lap ultra-high pandemic-related growth, this fintech giant is likely to continue its growth streak, and it's a stock you should consider. 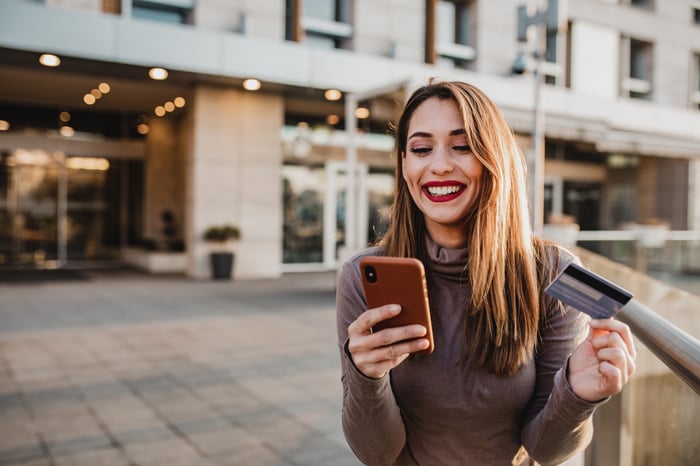 PayPal is the original online peer-to-peer payments service, and individual accounts make up one segment of the company's operations. It has made a string of acquisitions over the past few years, and now owns popular peer-to-peer payments app Venmo and price comparison plug-in Honey. Its other segment is merchant accounts, which powers credit card and other payments.

PayPal doubled its active accounts in the five years ending with 2020. Even if it doesn't match that in the coming five years, it is expecting to add 50 million new accounts in 2021, and more and more people are catching on to digital shopping and mobile wallets. And the company added thousands of new merchants who now offer PayPal checkout. In an internal survey, PayPal found that that 54% of customers are more likely to complete a purchase if PayPal is an option, and 59% have abandoned a transaction because PayPal wasn't an option.

Of course, this happened during a pandemic year when shoppers and individuals needed to rely on digital forms of payment. But all data indicates that the trend will continue. McKinsey research found that customers have been increasingly moving toward digital payments, with the biggest growth in people using more than one digital payment type. And PayPal knows it. Earlier this year, CFO John Rainey said, "The next five years will be very different than the last five, and we're striving to shape that outcome ... where e-commerce and digital payments are not just a fallback ... but instead a necessity, a necessity that is sought out as the preferred way for people to transact every single day."

Between these tailwinds and PayPal's position as the dominant player in the industry, there's a lot to expect from PayPal in the coming years.

Last week, PayPal launched cryptocurrency trading on Venmo. This is a direct response to Square's Cash App, which offers cryptocurrency and stock trading. But it's also an important move to get more value out of the app. Internal data found that 30% of Venmo users already trade cryptocurrency, and now PayPal gets a piece of the pie.

Cryptocurrency trading has gained in popularity, and the price of Bitcoin increased to nearly $64,000 before falling back this week. (By the way, Cathie Wood is also bullish on Bitcoin -- three Ark funds hold a combined 2.4 million shares of cryptocurrency exchange Coinbase Global, which just went public two weeks ago.) And Venmo has played an important role in PayPal's success, with TPV growing 60%. Account holders can now use a Venmo card, and the company has otherwise improved the Venmo experience.

In general, PayPal innovates regularly and easily. This is one of the keys to its success both past and future. Each new feature PayPal develops goes into its millions of customers' accounts and adds so much more value to the company. It already has a broad suite of products and services, and it envisions an "inclusive digital currency ecosystem."

PayPal stock has gained more than 120% over the past year, and between its huge and growing customer base and new features, investors can expect more growth in the future.