Please ensure Javascript is enabled for purposes of website accessibility
Log In Help Join The Motley Fool
Free Article Join Over 1 Million Premium Members And Get More In-Depth Stock Guidance and Research
By Rich Smith - May 2, 2021 at 6:53AM

Two years ago, NASA put out a call for America's biggest space companies to build it a "Human Landing System" to return American astronauts to the moon. Last year three teams signed up to do just that, and NASA doled out $967 million in contracts to help Jeff Bezos' Blue Origin (in cooperation with Lockheed Martin (LMT 2.56%) and Northrop Grumman (NOC 3.77%)), Leidos Holdings (LDOS 1.71%) subsidiary Dynetics, and Elon Musk's SpaceX design and build prototypes for NASA to choose from.

And this month, NASA finally picked its winner: SpaceX. 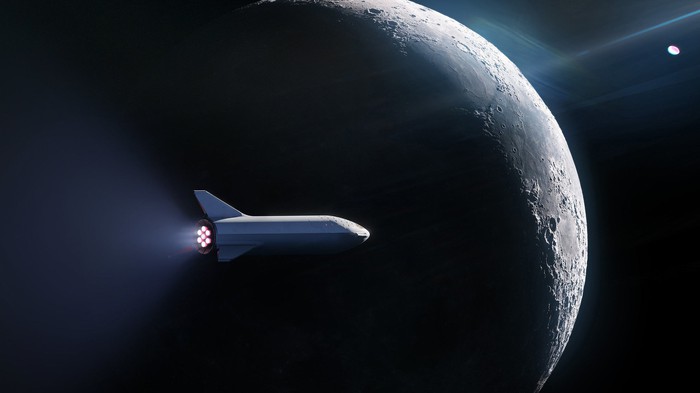 In a story that you know must have just burned Jeff Bezos's biscuits, The Washington Post (which Bezos also owns) reported last week that SpaceX "beat out Jeff Bezos's Blue Origin and Dynetics" as well. For $2.9 billion, paid in installments so that it "fits within NASA's current fiscal year budget," NASA will hire SpaceX to:

As NASA explained, although SpaceX's Starship is still in development, the rocket's enormous capacity promises "to greatly improve scientific operations" on the moon. Perhaps even more importantly, though, SpaceX's bid "was the lowest [bid] by a wide margin." Both Leidos's bid and the bid submitted by Blue Origin, Lockheed Martin, and Northrop Grumman were described as "significantly higher" than SpaceX's price.

The reason: SpaceX was already building Starships on its own dime as part of Elon Musk's goal of colonizing Mars. Because SpaceX was willing to pay "over half of the development and test activities" costs of building a Starship itself, it was able to charge NASA much less than the other bidders. In fact, SpaceX is probably viewing the moon contract as NASA helping to pay for some of SpaceX's development costs, rather than vice versa!

What the losers said

Not everyone was thrilled with NASA's decision. After absorbing the initial shock, on Monday both Dynetics and Blue Origin filed protests with the Government Accountability Office (GAO).

In a statement to SpaceNews.com, Dynetics questioned "several aspects of the acquisition process as well as elements of NASA's technical evaluation." NASA had rated Dynetics' management "very good," but rated its bid "marginal" for technical quality, citing concerns about the Dynetics lander's weight. Additionally, it seems that Dynetics' bid was well in excess of $6 billion -- far more than NASA had budgeted for this leg of the Artemis project.

Blue Origin bid just under $6 billion, still more than twice SpaceX's bid. Accusing NASA of running "a flawed acquisition" contest, Blue Origin alleged that the space agency "moved the goalposts at the last minute." Although it did not specify how NASA moved said goalposts, it argued that awarding only one human lander contract "eliminates opportunities for competition, significantly narrows the supply base, and ... delays [and] endangers America's return to the moon."

From that language, it appears Blue Origin was hoping NASA would choose two winners, as initially envisioned. And seeing as it submitted a bid higher than SpaceX's but lower than Dynetics', Blue Origin would have been the logical winner of any second contract. So that's what Blue Origin will probably be asking for now -- not that GAO take away SpaceX's win, but that it demand NASA award a second contract to Blue Origin as well.

Alternatively, Blue might try to couch its bid in installment payments, as SpaceX did, so as to similarly fit "within NASA's current budget," suggested Blue Origin CEO Bob Smith in a statement to the Post. That wouldn't change the fact that Blue's bid comes in at twice SpaceX's cost, but it might give NASA the financial flexibility to award a second contract.

Ordinarily, the twin GAO protests of SpaceX's NASA contract would draw work on the lander to a screeching halt, and keep it halted until the GAO renders a decision(s) -- which it must do within 90 days. In the current case, however, with SpaceX already building Starship prototypes on its own dime, and presumably not needing NASA's money to continue the spacecraft's development, it's likely SpaceX will continue working.

As for the challengers, however -- Dynetics parent Leidos, and Blue Origin partners Lockheed and Northrop -- well, investors in those companies will just have to bide their time and hope for the best. GAO will wrap up its consideration of the challenges by the end of July, and once GAO has decided, NASA intends to "begin work immediately on a follow-up competition" to "provide regularly recurring services to the lunar surface that will enable these crewed missions on sustainable basis."

Big as "$2.9 billion" sounds, it's really only the beginning of what these companies hope to earn from NASA's return to the moon.